It’s a special day in the Cambridge household because today Prince George turns 8 years old! The young royal has just grown up so quickly, and the family celebrated with a tradition that longtime royal fans absolutely love: seeing the latest portrait of Prince George, photographed by his mother, Kate Middleton. And in this year’s portrait, the 8-year-old looks more like his dad Prince William than ever before. 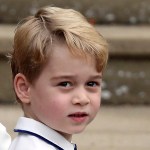 
Everything We Know About Prince George as He Turns 8!

The Cambridges took to their joint social media accounts and shared the latest photograph of the young royal just one day before he turned eight. In the portrait, Prince George smiled brightly for the camera while his mom snapped the image. He sported a navy blue polo shirt with orange stripes, and appeared to sit atop a car with a Land Rover in the background — likely a tribute to Prince George’s paternal great-grandfather, Prince Philip, who passed away in April 2021.

“Turning eight(!) tomorrow,” the caption read, featuring a celebratory emoji and a cake emoji. A camera emoji was also posted in the caption, giving photo credit to “The Duchess,” a reference to Kate Middleton. Honestly, we weren’t even sure that we were going to get a portrait of Prince George this year after a report claimed that the Cambridge’s might forgo the tradition due to online trolls “mocking” the future King of England. Fortunately, the Cambridges went ahead and shared the photo, and we’re so glad they did.

From his blonde hair to his infectious smile, Prince George looks so much like his dad, Prince William. In fact, a number of royal fans took to the comment section of the social media post to point out the likeness! Down to his teeth, Prince George’s resemblance to his dad simply can’t be denied. Prince George has drawn comparisons to his dad ever since he was a baby, even garnering attention for his resemblance to his father from the time he was a toddler. As Prince George continues to grow up in the public eye, we’re sure that these comparisons will only continue, and we think it’s just so sweet!

Click here to see the 100 best photos of the royal family from the past 20 years.