Despite some lingering tensions between Prince Harry and Meghan Markle and the royal family, the couple might be planning to travel to England as early as this September. Prince Harry’s recent visit to the United Kingdom appeared to be one full of sentiment and mending bonds, as the royal joined his older brother, Prince William, to unveil a statue dedicated to their mother, Princess Diana, in the Sunken Garden at Kensington Palace on July 1 — what would have been the late royal’s 60th birthday. Now, Prince Harry seems ready to bring the Duchess of Sussex with him on his next trip. 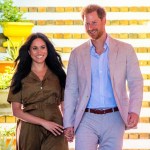 According to a new report from The Sun, Kensington Palace is planning a larger event to honor Princess Diana, and her youngest son is expected to attend. There’s also hope that Meghan will join Harry, but it might be just a bit too soon after the birth of their daughter, Lilibet Diana. Plus, tensions are surely still high amongst members of the royal family. “There were no peace talks and distance remains there,” a source told The Sun.

“It is a step forward but this was not the time or the place. September is a date pencilled in for a more extensive celebration of the statue,  and Harry will want to return.” This new report comes just after it seemed that Prince Harry and Prince William had partially restored their strained relationship. While some reports suggested that Prince Harry was nearly treated like an “outsider” during his recent trip to the United Kingdom, others seemed to imply that the brothers had turned a new page.

When it comes to Meghan and Kate Middleton’s relationship, the royal sisters-in-law are also reportedly back on the same page. The birth of Meghan and Harry’s sweet Lilibet Diana may have been the catalyst that spurred the two women to reconnect, too! And they have reportedly been reaching out to one another as royal fans continue to speculate what’s next for this generation of the royal family.

If Meghan does travel with Harry in September, it will be the first time she has visited England in more than a year — since Prince Harry and The Duchess of Sussex made the decision to take a step back as senior members of the royal family in January 2020. Of course, it would be less than four months after Lilibet’s birth that Meghan and Harry would make the journey. But only time will tell where the royals stand as the month approaches.