Prince Harry made the swift decision to fly to the UK in wake of his grandfather Prince Philip, Duke of Edinburgh’s passing at age 99 on Friday, though wife Meghan Markle, with a pregnancy due this spring, was not able to get medical clearance to join him. Meghan’s choice to stay seems like an obvious one given her late-term geriatric pregnancy, recent miscarriage, the stress of international travel in a pandemic, and her highly fraught relationship with the royal family. Harry’s choice to go without her, however, may not have been as equally obvious. Since arriving in the UK, where he’s staying with cousin Princess Eugenie and her new baby, Harry has reportedly been calling and FaceTiming Meghan multiple times a day, worried about having left her alone so close to her due date. 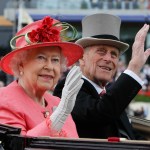 According to an Us Weekly source, Harry is in worried dad mode in a major way, glued to his iPhone for updates on the fam back in California.

“He’s already really missing Meghan and Archie and has been FaceTiming them every day to check in,” the source claims. “He actually speaks to Meghan a few times a day because he worries [about] leaving her when she’s so far along in her pregnancy.”

Meghan and Harry could be welcoming their baby daughter as soon as this May, so it’s understandable that he would be reluctant to leave — but at the same time, he’s missed out on a lot of family time in the UK already with the travel restrictions of the past year. From getting to meet cousin Eugenie’s baby son August to seeing his brother for the first time in well over a year, Harry likely felt ties to the family he still has in the UK on many levels. But all the same, he’s feeling that pull back to California now.

In the end, we hope that Harry and his family will be happier knowing he was able to appear at the funeral. And hopefully, nothing too exciting will happen with Meghan and baby Archie while Harry’s away.