It’s been just over a week since Prince Harry and Megan Markle’s wildly anticipated Netflix docuseries Harry & Meghan dropped on the streaming service, and there has already been speculation as how their family across the pond — namely Prince Harry’s brother, Prince William, and his wife, Kate Middleton, the Princess of Wales — has reacted to the explosive series.

Even though the Prince of Wales reportedly has been feeling some “anger and sadness” about the Netflix series, he is still Prince Harry’s big brother — and like any good protective older brother, Prince William apparently “won’t tolerate” others speaking poorly about his younger sibling.

Sources told The Telegraph that a reconciliation between the two royal brothers’ “strained relationship,” which has become more and more perfunctory than brotherly, doesn’t seem to have a high chance of happening, at least not anytime soon.

“Working together will never happen. But can they be brothers again? You’ve got to hope,” a source speculated of Prince William and Prince Harry’s future relationship.

The two have had multiple conflicts involving how quickly Prince Harry’s relationship with Meghan moved, the Sussexes’ decision to step down from their royal duties, and their bombshell interview with Oprah that illuminated some of the much darker aspects of being part of the royal family.

Prince William’s protectiveness might seem surprising to some, especially considering that Prince Harry cryptically alleged that “They were happy to lie to protect my brother, they were never willing to tell the truth to protect us,” in the latest trailer for Harry & Meghan. It is unclear who “they” refers to, or exactly what lies were allegedly told to Prince William to protect him. 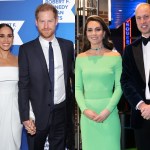 
Christmas Might Be Chilly For the Royals This Year, But They're Reportedly Still Exchanging Gifts Between the Kids

The final three episodes of Harry & Meghan will be available to stream on Netflix on December 15 at 3 a.m. ET.