They make quite a picture, the two of them: he tall and tousle-haired, she tiny and acrobatic. When he stretches out on the floor, she somersaults up the length of him, and it is the most romantic thing — this besotted pair of newlyweds, the delight of their private world.

“You’re beautiful,” she told him on their wedding day. “I want to waste the rest of my life with you.”

She is Bella Rosenfeld Chagall, he is the artist Marc Chagall, and in Emma Rice’s enchanting revival of Daniel Jamieson’s “The Flying Lovers of Vitebsk,” the story of their decades-long marriage feels like one of Chagall’s vivid paintings conjured in 3-D, given the power to talk and sing and dance.

This chamber play’s exquisite Bella (Audrey Brisson) and Marc (Marc Antolin) don’t actually fly, not the way they do in Chagall’s canvases — floating over rooftops or through rooms, love making them immune to gravity. But they do arc and tumble like those figures (choreography is by Etta Murfitt and Rice), and their faces are as greasepaint-white as they are in “Birthday,” his famous work from 1915, the year they wed.

Performed late last week at the Bristol Old Vic, in a part of England where theater audiences currently are not allowed, the show was live-streamed then and will be available on demand starting Friday.

A coproduction of the Bristol Old Vic, Kneehigh and Wise Children, it was as expertly captured on three cameras as Rice’s revival of “Romantics Anonymous” was in September. (The sound and broadcast designer is Simon Baker, the director of photography Steve Tanner.) 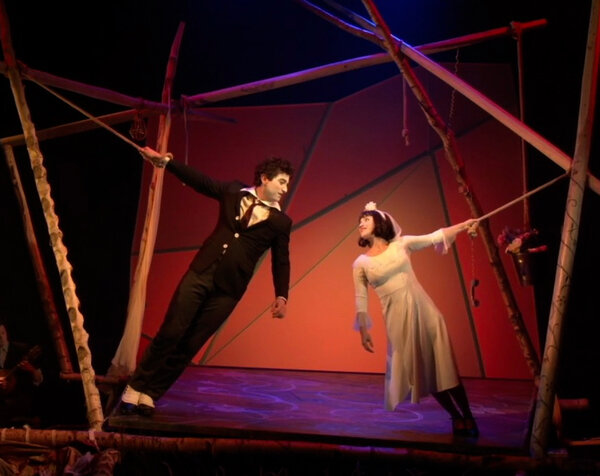 The triumph is how handmade “The Flying Lovers” still feels, even glowing out at us from a screen. This is partly down to the design: Sophia Clist’s bold costumes and simple set, with multiple planes all akimbo, and Malcolm Rippeth’s lighting, with its balance of saturation and subtlety.

But there is a pared-back restraint to this enterprise that lets warmth seep in as soon as the orchestra of two starts to play. The show hasn’t even begun when James Gow, on cello, and Ian Ross, on piano, transport us gently, jauntily, to a Russian-Jewish past. (Ross, the music director, is also the composer.)

“The Flying Lovers” is a memory play, and Marc — an old man as the story begins, long removed from his and Bella’s native Vitebsk — is doing the recollecting, just as he has done for so many years in his paintings.

“When some things are gone,” he says, “you thirst for their details in such a heartbreaking way. You feel an agony of need to remember.”

Despite this production’s rampant loveliness, the story it tells is inherently bittersweet, because it is the tale of a real marriage and because it unfolds amid war and anti-Semitism and pogroms.

And of course it is also the tale of a Great Man, who finds a woman who believes in him, tends to him and lends him strength when his is sapped — a woman whose own need for a creative life he scarcely notices, let alone supports.

Antolin, who was wonderful as the nerdish male lead in “Romantics Anonymous,” gets to be sexier here, but he doesn’t shy from Marc’s unreasonable, sometimes cruel self-absorption. Even so, it is jarring to hear Marc suggest, late in the play, that perhaps being a good model — like Bella, whom he so often depicted — should be a wedding vow for the wife of a painter.

This 90-minute play rushes its conclusion, giving shorter shrift to Bella’s writerly ambitions than it ought to if their frustration (did she waste her life with Marc after all?) is to have the necessary punch. Yet Brisson makes Bella fascinating: mirthful, steely, cleareyed, deep.

Early in their marriage, when Marc is hired to paint scenery at the New Jewish Theater in Moscow, Bella is entranced with the actors.

“They’re swallowing up our whole world,” she tells him, “and locking it in their bones.”

So Rice and her team have done with Chagall’s world. It is gorgeous. And it will make you ache to see theater live.

The Flying Lovers of Vitebsk
Available on demand Dec. 11-18; bristololdvic.org.uk.