If you’re in the mood for a music-infused retelling of a Greek myth, but can’t find, or afford, tickets to the Tony Award-winning “Hadestown” on Broadway, set your aim about 80 blocks north of midtown. There, in Marcus Garvey Park, the Classical Theater of Harlem is presenting a completely free and totally exhilarating new adaptation of “The Bacchae” that will leave you wanting to join the chorus.

And not just any chorus. The all-female group of singers and dancers in Bryan Doerries’s adaptation of the Euripides play has been possessed by the defiantly playful spirit of the deity Dionysus, who takes human form as the charismatic Preacher D (Jason C. Brown) and has come to wreak havoc on those who refuse to acknowledge his godliness.

Like the love child of Prince, Bob Marley and Jimi Hendrix, Preacher D is all swagger and seduction as he descends the steps of the Theban palace and announces, “I rep for Dionysus y’all and he don’t play/He’ll light yo ass up, if you got something to say.”

While the chorus of women sigh and writhe along, the young king Pentheus (R.J. Foster) is a tad skeptical. After returning to Thebes and finding that all the women have abandoned their duties in a state of euphoria, he demands to know why they are praising the god he mistakenly calls “Dianas.”

Little does he know that Dionysus/Preacher D is in fact his first cousin, son of Zeus and his aunt Semele, and all he’s looking for is some love from his family.

If you know the play, or any Greek tragedy, you know that things won’t turn out well for anyone other than the gods, which is why the pleasure in this “Bacchae” lies in Mr. Doerries’s exciting conclusion that ancient Thebes and contemporary Coachella might not have been that different.

Christopher Swader and Justin Swader created the rock-concert stage, dressed up with feather and leather costumes by Lex Liang. And the director Carl Cofield takes advantage of the outdoor setting with an electrifying staging that constantly breaks the fourth wall, bringing us mortals closer to the deities onstage. Although this is not the first musical adaptation of “The Bacchae,” it’s certainly the first that warrants a merch stand with “I Heart Dionysus” T-shirts.

Frederick Kennedy’s songs give Mr. Brown and each member of the lead chorus (Lori Vega, Gabrielle Djenné and Rebecca Ana Peña) the opportunity for a star turn. A chant craving Dionysus’s blessings has all the makings of a ’90s girl-group anthem. And Tiffany Rea-Fisher’s stylized choreography is begging for YouTube recreations.

The music is in fact so catchy that you don’t understand why Pentheus and company won’t give in to its pleasures. Mr. Doerries, who is no stranger to finding contemporary resonance in the Greeks, highlights how the Baquettes (as the Bacchae are affectionately renamed) are so powerful that even Dionysus might not be able to dominate them. In unity, these women have found independence. 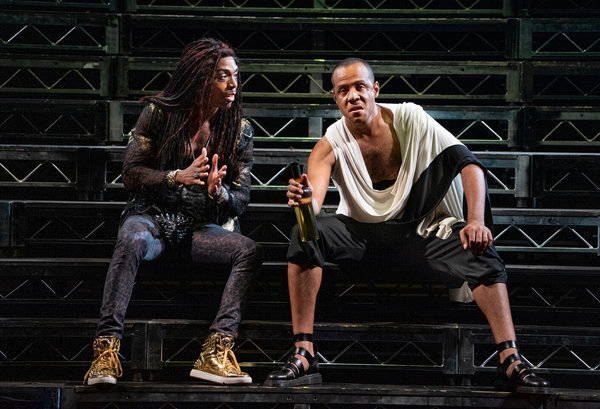 When they’re not center stage, the 12 women in the ensemble often surround the men trying to subjugate them. One tableau, which has them occupying three levels of the stage, is so breathtaking that you expect them to burst into “Cell Block Tango,” from “Chicago,” and regale us with their personal stories.

Of course that isn’t the case; the plot follows the heads-will-roll spirit of Euripides. There are gruesome discoveries and a call for new gods, a timely message if there ever was one.

And just as in the best rock concerts, when this 70-minute experience comes to an end, don’t be surprised if you’re possessed by a spirit that makes you shout for an encore.

When you purchase a ticket for an independently reviewed play or musical through our site, we earn an affiliate commission.

This information was last updated on July 9, 2019