When it comes to “Tales of the City,” the nostalgia just keeps compounding. The original television mini-series was already a wistful evocation of a disappearing San Francisco. And even as it played on PBS in early 1994, the internet was slouching into existence down the peninsula. With Netflix offering a new, 10-episode installment — a contemporary sequel, and the fourth series based on Armistead Maupin’s novels — both the first series, and the late-bohemian 1970s San Francisco it depicted, seem lost in the fog of time.

Yet there’s Laura Linney, fresh and funny as ever, once again reprising the role of Mary Ann, the Midwestern ingénue who’s forever arriving in the city by the bay and having her life changed. And Olympia Dukakis, still formidable as Anna Madrigal, whose 90th birthday is the device that brings Mary Ann back to Anna’s enclave in the fictional hilltop wonderland of Barbary Lane.

Their presence, though, as comforting as it is, doesn’t quite justify the effort expended on the new series or the nine-plus hours it will take you to watch it. The real nostalgia that this slack, earnest, self-help tract of a show evokes is for a time when a TV drama’s main job was to tell a story.

Developed by Lauren Morelli, whose previous TV writing and producing experience was on “Orange Is the New Black,” this “Tales of the City” has the requisite web of plots, or at least character complications. Mary Ann’s surprise visit to San Francisco is predictably extended and she struggles to come to terms with the ex-husband, Brian (Paul Gross, again), and the daughter, Shawna (Ellen Page), whom she left behind. 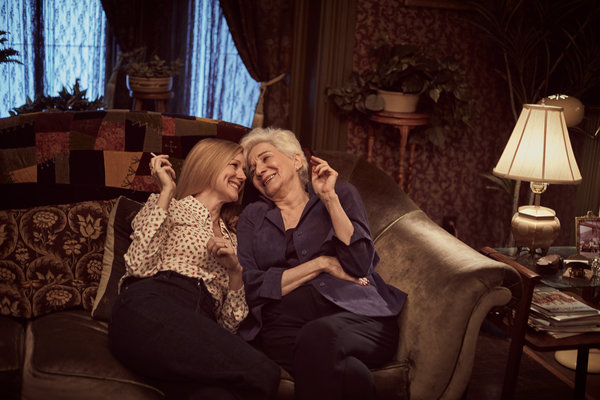 Her old friend Mouse, now played by Murray Bartlett of “Looking,” still lives at Barbary Lane and still has relationship issues. Anna is once again involved in a mystery, which gets Mary Ann and the others out of the house for some amateur sleuthing and even a comic ride-sharing car chase.

But there’s no energy or conviction in the storytelling, and while Linney, Gross, Bartlett and Page occasionally strike some sparks when they’re onscreen together, scene after scene goes by free of any real dramatic or emotional payoff.

Or maybe there are nothing but emotional payoffs, depending on your expectations. “Tales of the City” was of course famously trailblazing in its depictions of gay and transgender life and love in 1994; the current series expands its representation, with new Barbary Lane residents who include a young transgender man, Jake (played by a transgender and nonbinary actor, Garcia), and his girlfriend, Margot (May Hong), who are both questioning their sexuality. (And behind the camera, the show’s writers and directors are mostly L.G.B.T.Q.) Jake, in particular, plays out situations with family and lovers that are new to mainstream TV.

But the story lines involving the younger characters consistently default to flat, safe conversations about gender and queerness — the show can start to feel like an extended TED Talk, or a long night at a boring but very affirmative gathering of friends. For a celebration of diverse identities and lifestyles, with a healthy amount of nudity and some graphic depictions of sex, it’s resolutely square.

This effect rules even though the writers undercut the characters’ pieties now and then. One of the few really distinctive and lively scenes in the series is a direct example of this: At a dinner party, a group of affluent, white, middle-aged gay men react angrily when Mouse’s younger, nonwhite boyfriend calls them out for what he sees as their privilege. The ideas aren’t very clear, but the emotions are sharp because actors like Dan Butler, Malcolm Gets and Brooks Ashmanskas are brought in to play the guests. Stephen Spinella gets a nice meta-moment, snapping that the boyfriend doesn’t understand their struggle just because he saw “Angels in America.”

That scene stands almost alone, though. A 1960s flashback episode, showing Anna’s early days in the city, has a shape to it, at least, and benefits from the performances of the transgender actresses Jen Richards and Daniela Vega (star of the Chilean film “A Fantastic Woman”). And other performers make welcome appearances in small parts, including Mary Louise Wilson and John Glover as residents of a queer nursing home and Danny Burstein as Shawna’s uncle.

The original formula of “Tales of City” involved putting Linney’s screwball-comedy energy as Mary Ann at the center of a sexed-up but fairly conventional soap opera plot. That’s still the template, but what was quirky and entertaining then — with Richard Kramer, a “Thirtysomething” veteran, on board as a writer and executive producer — is draggy, preachy and a little morbid now. Might as well blame it on the internet along with everything else.

Mike Hale is a television critic. He also writes about online video, film and media. He came to The Times in 1995 and worked as an editor in Sports, Arts & Leisure and Weekend Arts before becoming a critic in 2009. @mikehalenyt • Facebook