The state dinner held at Buckingham Palace in honor of President Trump and Melania Trump’s visit to the UK on Monday night got real awkward, real quick. That’s because Rose Hanbury attended the state dinner amid her cheating scandal with Prince William and Kate Middleton. Hanbury was accompanied by her husband, David, Marquess of Cholmondeley. As if Hanbury’s attendance wasn’t puzzling enough, there are also a lot of details about her time at the state dinner — from where she was seated to her placement in the procession into the banquet hall — that speak volumes about her relationship with the Duke and Duchess of Cambridge, especially amid recent rumors of William and Hanbury’s alleged affair.

Per Celebitchy (one of the few outlets actually writing about this, possibly because of legal action William has taken against any press who would publish this news), Hanbury and David were among the 170 guests invited to the state dinner held in honor of the Trump family’s three-day visit to the UK. According to royal reporter Richard Palmer via Twitter, David was invited because of his constitutional duties related to his role as Lord Great Chamberlain which means Hanbury was invited as well. Hanbury looked stunning in white, the color of the evening, and was also apparently not wearing her wedding ring. That’s not exactly damning evidence of a marriage on the rocks. It’s possible this was a style choice for Hanbury or that she chooses not to wear one. 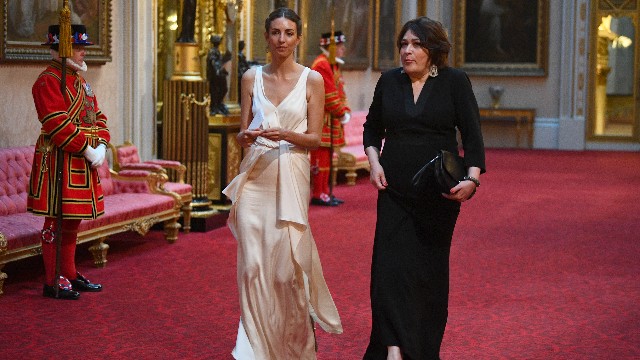 Despite her invite to the exclusive dinner, Hanbury was reportedly one of the last guests seen in the procession into the hall — something that is predetermined before the night of the dinner and only adds to the subtle shadiness of her attendance.

Hanbury was also seen entering with The Daily Mail columnist Sarah Vine, also the wife of UK politician Michael Gove. Vine has apparently written problematic articles towards female politicians, including former Prime Minister Teresa May, and Meghan Markle, Duchess of Sussex. It’s unclear if Hanbury and Vine were paired together to walk into the dinner, but it certainly appears that way as other guests were paired to go into the hall together, like Melania Trump or Prince Charles or Kate Middleton and Steve Mnuchin . 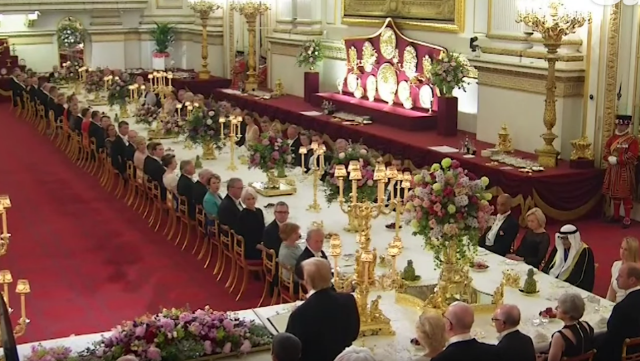 Hanbury’s seat at the dinner was also very interesting. As seen above in a screencap from The Sun’s YouTube video covering President Trump’s remarks during the dinner, Hanbury can be spotted on the right side of one of the banquet tables. She was seated next to Jeremy Fleming and Professor Ralph Speth while husband David sat next to the Duchess of Gloucester. William was seated at the same long table as Hanbury, while Kate was apparently on the other side of the hall. How very interesting, indeed.

Don’t expect any official statements or acknowledgments of the true weight of Hanbury’s attendance at this dinner amid her and William’s cheating scandal to be issued. For now, just a keep a pin in this as evidence that Hanbury isn’t going to hide away and wait out this scandal storm anytime soon.