Stuck inside, looking at social media on your phone, bored with what’s on streaming, it could start to seem like a good idea. A monolith, you might reason, could add a glimmer of mystery to your local wilderness, might make people laugh, or at least distract them with a literal shiny object.

They’ve appeared in Utah, California and Romania. There’s a three-foot one in downtown Fayetteville, N.C., and one on a beach of England’s Isle of Wight.

Of course, there are plenty of reasons not to build a monolith. Like legality: Trespassing on private land aside, it’s also illegal to install structures without authorization in many places, including on Utah’s millions of acres of federally managed public land, where a 10-foot, stainless steel object was found last month, inspiring copycats around the world. Metalwork can be dangerous without training, and a large, unstable metal object could pose a danger to the people around it — and the environment. There are cheaper, easier, more clearly legal and less hazardous ways to pass the time (books, walks, projects that don’t involve monoliths).

The other monoliths as models

It remains unknown how many people have built monoliths because they have backyards and easygoing neighbors, rooms with high ceilings or ambitions for only small monoliths that could, for instance, loom mysteriously over the dinner table.

The best-known monoliths, the ones you’ve seen all those headlines about, have been built on more contested ground. After the Utah monolith was found, the Bureau of Land Management said that it “would like to remind public land visitors that using, occupying, or developing the public lands or their resources without a required authorization is illegal.”

And building a monolith seems to invite the dismantling of a monolith, if not by the authorities, then by regular people. Other objects have been removed, shortly after discovery, from a parking lot in San Diego, a mountain in Atascadero, Calif., and a plateau in Romania.

The Utah monolith had stainless steel pieces fastened with rivets, officials said. Its interior, exposed in a video of four men carting the monolith away in the dead of night, appeared to show a plywood frame.

“They’re pretty straightforward in construction and design,” said Anita La Scala, a founder of ARDA Studio, a theater and event design company in New York. Sheet metal is available in many sizes, said another ARDA founder and designer, Rob Bissinger, and the metal could be either fastened, welded or bent around a frame to form a monolith shape. 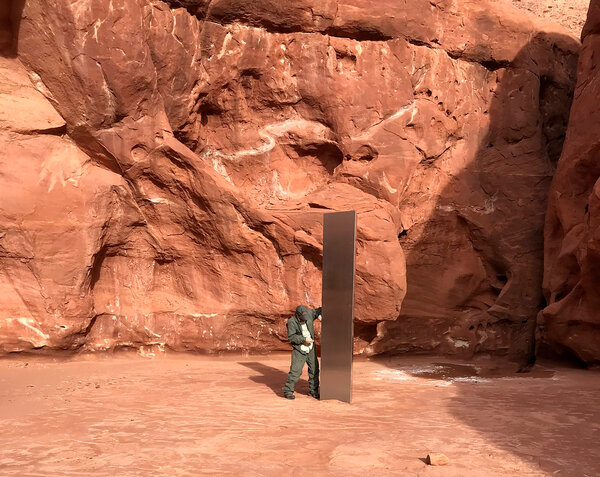 “The sizes aren’t so bizarre,” Mr. Bissinger said. “You could order them and no one would say, ‘Oh, are you building a monolith in the desert?’”

An interior frame can be made of plywood or a material along those lines, cut into a triangular shape with a simple handsaw or a circle saw. More ambitious monolith-builders could use a CNC machine — a sort of a computer-controlled cutting tool — to make the frame, Ms. La Scala said, and the metal could be cut into panels by a water jet machine “to ease the edges so they aren’t a rough cut.” A sheet metal brake can bend metal, though maybe not in large segments.

A pickup, Jeep or rental truck would probably suffice to move the supplies, Mr. Bissinger said. To install a monolith, the designers said the base could be concrete footing or metal footing like rebar. Or, Mr. Bissinger said, monolith-builders could simply dig a hole below the frost line and fill the bottom with aggregate or sandbags, “like if you were putting in a mailbox.”

Dan Toone, an artist in Salt Lake City, said that photos of the Utah monolith suggested its creators used a concrete saw to cut into the rock, mount a wood or metal framework, and then install the metal sheets on the spot. “It was very clean and very well done,” he said. “Somebody professionally did that.”

Over all it’s not a terribly expensive process. A lower-end monolith could cost as little as $200 to $300, said Scott Neale, a professor of scenic design at Trinity University. He said that such an object could be completed by someone with “midlevel skills” in a theater’s scene shop or someone’s garage, with metal shears or an acetylene torch.

To strengthen a Utah-style construction, the special-effects artist Jamie Hyneman, who was a longtime host of the show “Mythbusters,” said that a builder could coat the wood framing with epoxy to hold the sheet metal, and place another board on top with weights for a few hours to secure the construction.

He also outlined another, sturdier version of monolith that would use thick pieces of metal, cast into the corners of the triangular shape, to hold the three panels of metal together. This construction might take some more work, in order to bevel the edges of the sheet metal and create the corner fasteners, but a monolith could still be ready in a day or two.

“You could pretty much specify all this stuff at some machine shop and just assemble it,” he said. “It’s really kind of a dead simple thing.”

He warned that the devil was in the details. Thinner metal could make the monolith seem “kind of warpy,” and require countersinking the metal. Cardboard could help prevent scratches while moving the monolith, and rope could help lift it. Rebar drilled into the base and stuck into the ground could secure it.

So many kinds of monoliths

For purists, a monolith is a single large block, usually made of stone, in the style of an obelisk or a geometric slab, like the rectangular one from “2001: A Space Odyssey.” That film’s director, Stanley Kubrick, originally wanted a transparent object, said David Mikics, a professor at the University of Houston and the author of a Kubrick biography.

“He ordered up an enormous piece of Lucite, the largest Lucite object that had ever been made,” Mr. Mikics said. But when the object was delivered, Kubrick was disappointed it was not, in fact, completely transparent. So he ordered up a new prop to be painted, over and over again, in a shade of matte black. “This of course was a great idea, it’s just like an abyss,” Mr. Mikics said.

But objects of the scale and uniformity of monoliths also, generally, get called monoliths. The artist John McCracken made monolith-like planks from rectangular boards of plywood covered in Fiberglas, painted a single color and highly polished. One sold at auction this year for $400,000. Max Dorey, a scenic designer in Britain, said that a monolith discovered this month on a beach in England was probably not very expensive; it could have been made with industrial adhesive that stuck glass mirrors on a wooden center.

The shroud of mystery

In at least two cases, groups have stepped forward to claim responsibility for recent monoliths. Four artist-fabricators in Atascadero said theirs, which appeared about two weeks after the Utah one made headlines — was meant to be “a piece of guerrilla art.” A collective in New Mexico, called the Most Famous Artist, has also claimed some responsibility, though without specifying any details.

“The monoliths are built by a distributed community of interdisciplinary artists,” the group said in response to an email. “Many copycats have emerged and we are celebrating everyone’s contributions to the global art phenomenon.”

But most of the monoliths have gone unexplained. Observers largely agreed that, whatever the purpose of the Utah object, the monoliths that followed are imitators by people looking for something to do. “Festivals are off and theaters are closed,” Mr. Dorey said. “Everyone’s got time on their hands.”

Mr. Hyneman made a similar observation: “Everybody’s got to have a hobby.”