Between a spiking pandemic and a slugfest election, November has brought storm clouds to the nation. But to the art world it introduces two warm points of light in concurrent shows by the Indigenous American artist and filmmaker Sky Hopinka. One, in a new Manhattan gallery, is his New York City solo debut; the other, at Bard College in upstate New York, his first museum survey anywhere.

Mr. Hopinka is a member of the Ho-Chunk Nation and descended from the Pechanga Band of Luiseño Indians. His work, which he aptly calls “ethnopoetic,” is built on that biographical data, but expands outward from it. It’s steeped in Native American history but rejects the idea that history is confined to the past. Present tense and personal, it rivals in visual and linguistic beauty any new art I’ve seen in some time.

The artist was born in 1984 in Ferndale, Wash., to parents with different tribal affiliations, both of whom were active as performers on the so-called powwow circuit. His mother was a dancer; his father, Mike Hopinka, is a Ho-Chunk songwriter and singer. The earliest of the Bard show’s four short videos is about him.

Made in 2015 and titled “Jáaji Approx” (Jáaji is a direct address form of “father” in the Ho-Chunk language), the video is framed as an imaginary road trip in a car traveling across the American West or Midwest. The artist and his father are the assumed passengers, and the soundtrack for their journey is a set of taped audio recordings the artist has made of his father singing or talking about singing. (“The object is to make the dancer dance.”)

In interviews, Mr. Hopinka has spoken of feeling distant from his father while growing up. And in the video, we hear him coolly introducing the songs without comment, by the date and time. (“Jáaji’s recordings, December 22, 2007”). But he also seems to tacitly acknowledge a bond, if only in the fact that both men are most at home, together or alone, when they’re on the move. At one lovely moment, he turns from observer to collaborator, blending his own voice with his father’s in a song. And the video’s closing image, of the older man sitting in the passenger seat and whistling into the sunset, is a keeper.

A second video, “I’ll Remember You as You Were, Not as What You’ll Become,” from 2016, is also a homage to an individual, in this case the poet Diane Burns (Chemehuevi and Anishinabe), who died in 2006 at 49. It opens with an anthropological text describing the Ho-Chunk concept of death and immortality not as a celestial sojourn but as a return to everyday life. Next, the sound of a chorus vigorously singing a Christian hymn about a quest for heaven presents a different vision. But the visuals that accompany the hymn — billowing curtains of color that reveal glimpses of women dancing at a powwow — anchor us to earth and its pleasures. 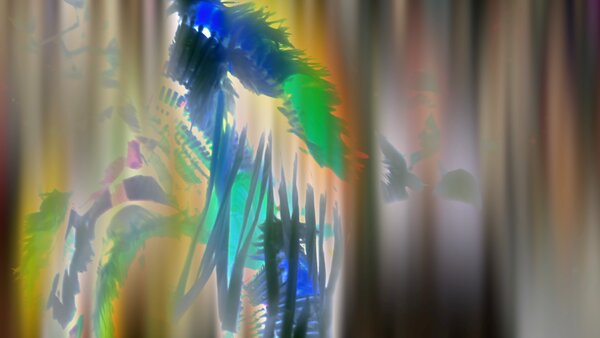 Ms. Burns here is at the film’s center. Seen in an archival film clip, she stands in the spotlight on a dark stage reciting a satirical poem strung together from racist clichés about Indigenous people (“Yeah, a lot of us drink too much” and “This ain’t no stoic look, this is my face”) followed by a funky anthem of ethnic pride. She’s a force; you can feel it. The video ends with a return to colors and dancers, as if to reaffirm that Earth, despite its losses and flaws, is as close to Paradise as we’ll come.

Earth, as a map of political and spiritual geography, clearly means a lot to Mr. Hopinka. After growing up in Southern California, where his mother had family ties, he eventually moved to the vicinity of the Ho-Chunk tribal homeland in Wisconsin. From there, in 2016, he made repeated trips to the Standing Rock reservation in North Dakota to film demonstrations against the running of the Dakota Access Pipeline through sacred tribal land. The 16-minute video that resulted, “Dislocation Blues,” is his most topical work so far, though it doesn’t pretend to either the objectivity of a documentary or the moral thrust of protest art.

It’s a study in questions, not assertions. It opens with a video interview with a young protester named Cleo Keahna (Ojibwe/Meskwaki) who is devoted to stopping the pipeline but who, as a person of nonbinary “two spirit” gender, at first had doubts about being accepted in the movement, doubts that she seems to have later resolved. Her appearances are interspersed with those of another Indigenous participant, Terry Running Wild, who speaks of the Standing Rock gathering as “one big family” but voices suspicions of hostile infiltrators and of “anyone who’s not Native.”

The video suggests that Mr. Hopinka finds himself, despite his ethnicity, having doubts about his role here. Supporter? Recorder? Critic? His panoramic shots of sprawling camps and wide-open landscapes catch the epic tenor of the occasion, as does the sustained shot of marching protesters that closes the piece. But he has scored that final sequence with a curious marching song: Bobby Darin’s 1963 pop loser anthem, “Not for Me” (“I don’t doubt love can be/Warm and tender for some/But not for me”).

Ms. Keahna’s conclusion that the protest “helped me realize that no one person is the authority on anything” seems to sum up Mr. Hopinka’s approach to his own work on the complexities of Indigenous cultures.

By virtue of having been commissioned by Bard, the 2020 three-channel video installation, “Here you are before the trees,” is the show’s centerpiece, and it really is exquisite. It’s also territorially specific: It brings Bard itself into the larger narrative of Indigenous sovereignty and disenfranchisement. The school stands on land once occupied by the Munsee and Muhheaconneok (Mohican) peoples, who in the early 19th century were forcibly relocated to reservations in northeast Wisconsin adjacent to the Ho-Chunk homeland.

In telling this story, Mr. Hopinka, as always, gives equal weight to images and words, and balances the facts of a tragic past with evidence of a resilient present. In this case, most of the images are of landscapes, streams and forests in Wisconsin and the Hudson Valley. Words, by historians present and past, are spoken aloud or scroll on the screen. The only visible figure in the piece is an elderly woman seen intently sorting and identifying shells by the shore of a river. It’s Mr. Hopinka’s grandmother. In a final tracking shot, we see a close-up of her hand holding another hand — the artist’s? — as she is gently assisted to a lawn chair and settles down.

The Bard show — organized by Lauren Cornell, director of the graduate program and chief curator of Bard’s Center for Curatorial Studies, and Dr. Christian Ayne Crouch, associate professor of history at Bard — also includes a series of photographs Mr. Hopinka took last January while traveling around the United States. Months later, with the coronavirus ravaging the nation and political thunderheads growing mountainous, he wrote a set of short, first-person texts, then assigned each to a photograph, inscribing the words directly on the prints with a power tool.

He titled the series of 16 pictures “Breathings,” after a form of Indigenous prayer. But he left the overall meaning of work, open-ended, the alignment of words and images semi-random, and the order of the photographs unfixed. In the series, document, diary, politics and poetry meet.

They meet again in his current New York City solo, which inaugurates a TriBeCa gallery called Broadway. Presented in cooperation with the Green Gallery in Milwaukee, a city where the artist has spent time, the show is small — a looping 10-minute film titled “Lore” and a suite of photographs — but rich.

All the work is from last year. The 16 half-abstract photos came first. They’re pictures of pictures: still-life style shots of color transparencies, their images of landscapes and people (men carrying a canoe; men carrying what could be weapons) hard to read. And each photo has a terse, cryptic one-line inscription: “These are dense countries and empty cities”; “The outside being here right now.”

The transparencies reappear in “Lore.” We see them being slapped down on a light table and pushed around and rearranged by the artist’s restless hand while in voice-over he reads a ruminative text that weaves together references to family, Indigenous myths, colonial trauma, and what sounds like the end of a love affair.

With its scrambled but recurring themes, the text is essentially a long poem, a version of which can be found in a slender new volume of Mr. Hopinka’s writing titled “Perfidia,” designed by the Brooklyn-based publisher Wendy’s Subway and released by Bard to coincide with its survey. If “Perfidia” reads like a collage of ideas and images, much of the film really is one, a visual collage in constant motion, with its images growing darker as the transparencies accumulate.

Yet toward the end of the film there’s a change of scene and mood. We hear the twang of an electric guitar chord and voices tentatively singing, and we’re in a room with a group of musicians warming up, all of them friends of the artist, who himself plays in the band. They slide into Bo Diddley’s 1955 “Heart-O-Matic Love,” a song about love as a road trip — starts slow, hits bumps, keeps going — and they give it a languorous, almost devotional spin. This is a sweet scene, a communal scene, a family scene, a gathering-of-the-tribes scene. In Mr. Hopinka’s art, wherever a tribe gathers is a place to be.

Through Jan. 10 at CCS Bard Hessel Museum, Bard College, Annandale-on-Hudson, N.Y.; 845-758-7598, ccs.bard.edu. The exhibition, which closed in October, will reopen on Nov. 28. Admission is by advance reservation.