Almost a quarter of Vue’s UK cinemas will shut for three days a week in the wake of the postponements of the next James Bond film and other blockbusters.

Twenty-one of the chain’s 87 sites will be closed from Tuesdays to Thursdays.

The move is necessary “to ensure that our business is financially well-placed to withstand the uncertainty ahead”, a spokesperson said.

UK cinema admissions in 2020 are reportedly due to be the lowest since records began almost a century ago.

The Guardian reported on Monday that box office takings are expected to drop by more than £900m compared with 2019.

Vue’s announcement follows the temporary closure of all 127 Cineworld and Picturehouse cinemas, and Odeon’s decision to open 30 of its 120 locations from Fridays to Sundays only. 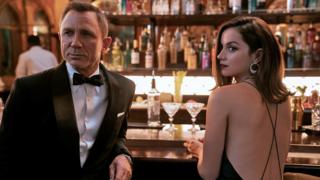 This all follows the postponement of James Bond’s No Time To Die, one of the most hotly anticipated forthcoming releases, from November to April 2021. It had already been pushed back from April 2020.

There have also been delays to other major films like Dune and Black Widow. Last week, Disney said its animation Soul, which features the voice of Jamie Foxx, would be released on its Disney+ streaming service instead of coming out at cinemas at the end of November as planned.

Vue chief executive Tim Richards recently warned about the impact of the disappearance of major releases like Bond from the big-screen schedule.

“Our problem right now is we have no movies. This was a big blow for us,” he said last week.

“We’re likely going to make it through. I’m concerned about the independents and the small regional operators right now that are going to really struggle, and when they close they may not reopen.”

The Vues going part-time include its flagship cinema in London’s Leicester Square, plus four others in the capital and sites including Cardiff, Newbury, Rhyl and Birkenhead.

A spokesperson said: “We remain committed to ensuring that Vue has a long-term future, to protecting the livelihoods of our staff and keeping our doors open to ensure our cinemas continue to serve the communities they operate in.”

They added that “our belief in the future of this industry is unshaken” and “we are looking forward to returning to full steam as soon as Hollywood studios start releasing the content which audiences are clamouring for”.

Other chains including Showcase and Everyman have said they will remain open.