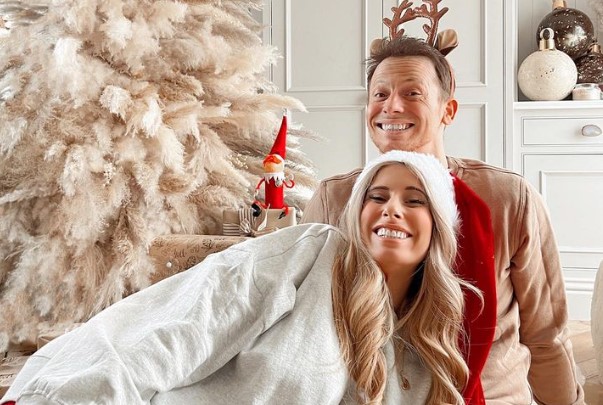 Stacey Solomon has suggested that she was unaware she was pregnant for quite some time before revealing her happy news with the world.

The Loose Women star, 33, is expecting her fifth child and her third with husband Joe Swash, 40, having dropped the baby bombshell on fans earlier this week.

On Friday she also dropped another bombshell: that she’s much further along in her pregnancy than people might think, and is actually due to give birth around a month from now.

And now it seems that baby number five snuck up on our Stace at the start, as she jokingly compared her early baby bump to a sizeable midday meal.

Having shared on Instagram that she and Joe ‘wanted to have that first few months you usually would to adjust and get excited and enjoy it to ourselves’ after finding out they were going to be parents again, she added that it ‘didn’t leave us with very long left’.

Former Apprentice star Luisa Zissman replied to the post, which included a gorgeous pregnancy photoshoot, writing: ‘Omg how did you not know with a bump that big!!

‘I’ve got the fear – esp after a girl who works for me just dropped an 8lb baby not knowing she was pregnant – congrats.’

Former X Factor star Stacey replied: ‘I mean I know now, but a few months ago I looked like I’d had a big lunch every now and again.’

So, putting two and two together, it may have been a good few months until the Solomon-Swashes knew their brood was about to expand once again.

The couple, who tied the knot in July this year, are also parents to son Rex, three, and baby daughter Rose, one, who was born last October on Stacey’s 32nd birthday.

Stacey has also joked about being pregnant on her wedding day just six months ago.

Replying to comments from some fans who picked up on the dates and presumed she was with child by the time she said ‘I do’, she wrote: ‘For those saying you knew when we got married, well you could have let us know Poirot.’

The beloved TV star has been overwhelmed with the support from her fans since announcing her joyous news.

Addressing her fans on Instagram, she gushed: ‘I just wanted to come on and say thank you so much, you’re honestly so lovely and so kind. We actually found out way later than you would usually, so we’re a lot further along than when you would usually tell people.

‘So we are really nervous and it was a real surprise, but we’re so grateful and really excited for what’s to come.’