President Trump’s infrastructure meeting with Democratic congressional leaders on Wednesday ended angrily after three minutes, with the president later singling out Speaker Nancy Pelosi for accusing him of a cover-up. The late-night hosts piled on both Trump and Pelosi.

“Pelosi can’t be surprised. It’s like talking trash about your friend, then showing up to the group brunch, like, ‘Hey, girl.’” — JIMMY FALLON

“That’s like responding to someone’s birthday evite by writing, ‘I resent the day you were born,’ and then still clicking ‘Will attend.’” — SETH MEYERS

Immediately after the abbreviated meeting, Trump held an unscheduled news conference in the White House Rose Garden, where he said he had no interest in working with Democrats until they stopped investigating him.

“Now this confused me a lot, because is he saying that up until this point he was working with the Democrats? The last two years were his version of things going well?” — JAMES CORDEN

“So Trump has a clear stance on infrastructure. [Imitating Trump] ‘It’s my way, or no highways.’” — STEPHEN COLBERT

The Other White Guys Running in 2020

While Trump continued to dominate the news, some of the other 2020 presidential candidates also came up on late night Wednesday.

“I saw that Beto O’Rourke has fallen from third place to eighth. Now Beto is asking experts how to get back up to third. Meanwhile, Bill de Blasio is asking Beto how to get up to eighth.” — JIMMY FALLON

“Joe Biden raised over $2 million in just two days while he was in Florida. Amazing. In Florida, he raised $2 million, probably due to his speech entitled, ‘Hey, I Am Your Age.’” — CONAN O’BRIEN

“Why even bother doing a Fox town hall? As Democrats, there are easier ways for you to get lots of Fox News airtime. You can talk about climate change or wear pajamas — or if all those options fail, just be Hillary Clinton.” — SAMANTHA BEE, on Pete Buttigieg’s decision to appear on the network

“Presidential hopeful Beto O’Rourke held a town hall on CNN last night where he revealed that he worked as a live-in nanny after college. Said his wife, ‘No, you’re a dad.’” — SETH MEYERS

“Trump walked out the door, straight to the Rose Garden for a nationally televised hissy fit, complete with a podium adorned with a preprinted sign that said, ‘No collusion, no obstruction.’ Blocked the seal. Very presidential, I gotta say, very presidential. It reminds me of the time that Jefferson addressed the Continental Congress behind a sign that said, ‘Sally Hemings: just a friend.’” — STEPHEN COLBERT

“Can you stop calling Don Jr. a young man? He’s 41. When a woman turns 41 you’re ready to drive her to the edge of the woods and leave her there: ‘O.K., goodbye, enjoy the two or three years you have left.’” — SETH MEYERS, on Trump’s referring to his son as a “good young man” who has “gone through hell”

Lena Waithe filled in as guest host for Jimmy Kimmel on Wednesday night and received a rousing pep talk from her friend and fellow “Boomerang” producer, Halle Berry.

What We’re Excited About on Thursday Night

Conan O’Brien will talk shop with Colbert on “The Late Show.” 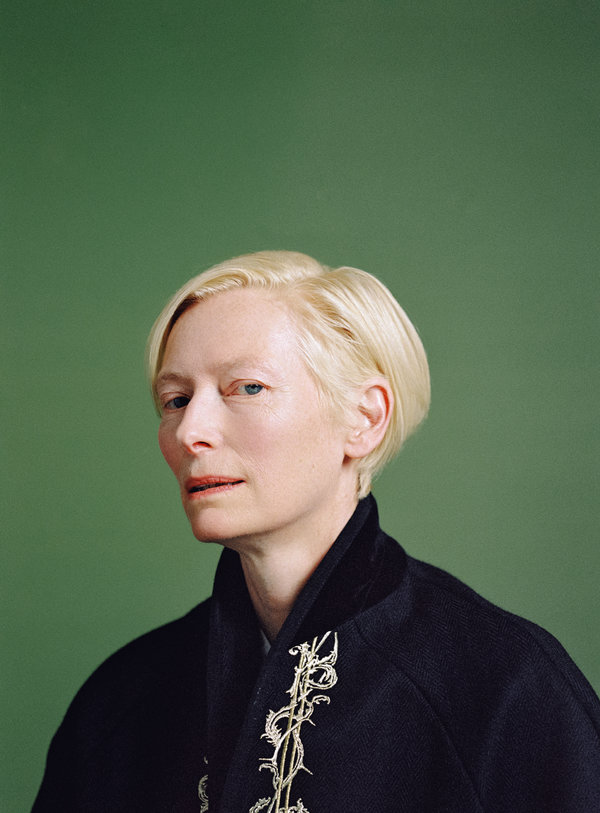 Tilda Swinton is making her first foray into the art world with her curation of “Orlando,” works inspired by Virginia Woolf’s novel of the same name. Swinton starred as the titular character in a 1992 film adaptation, and her love of the text turned into her new show, opening at the Aperture Foundation in New York on Friday.