Shawn Walker was up on 125th Street with Louis Draper and Ray Francis, hanging out and taking pictures. It was the summer of 1964 and the friends, in their 20s, were members of a fledgling photography collective in Harlem called the Kamoinge Workshop. That’s when the celebrated photographer Roy DeCarava walked up. The workshop’s mentor at the time, DeCarava was on assignment that day for Newsweek.

Harlem had just experienced riots, after the killing of an unarmed Black man by an off-duty cop. Newsweek’s editors needed an image to suit the angle of their cover story — “Harlem: Hatred in the Streets.” DeCarava delivered a shot of three men looking stern, framed close with set jaws and steely gaze.

The picture was staged. It was of Mr. Walker and his friends — bohemians whose Sunday meetings mixed critiques of one another’s photographs with talk of art history and the latest Italian cinema — who were instructed to look angry by DeCarava and the white art director who accompanied him. “We just ran into each other, we were chatting, and Roy comes up,” Mr. Walker recalled. “If anything was happening you went to 125th Street.” 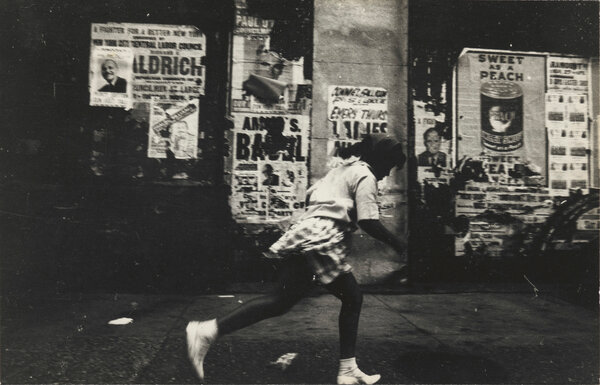 Such was the disconnect in the Sixties, when Harlem was buzzing with culture, but its representation suffered from mainstream publications’ appetite for images of poverty and violence, or from obsession with a few newsmakers like Malcolm X, passing over regular life.

For the group of African-American photographers who coalesced around 1963 to form Kamoinge, the answer to skewed portrayals of the community and scarce publishing opportunities was to get together, and do better.

“The reason we came together was to take pictures,” said Adger Cowans, who arrived in New York in 1960 after studying photography at Ohio University and a stint in the Navy. “It was about the actual photographic image, to take beautiful pictures of our people.”

Influential in Black photography circles, Kamoinge is little-known beyond. “Working Together: The Photographers of the Kamoinge Workshop,” now at the Whitney Museum after originating at the Virginia Museum of Fine Arts, is the first museum show focused on the group since the 1970s.

“The exhibition introduces African-American artists who were ignored until recently,” said John Edwin Mason, a historian at the University of Virginia who contributed to the catalog. “They were showing what could be done as individuals, but also as a collectivity. They came of age in the age of Black nationalism, Black self-assertion and self-determination. They created an institutional structure for themselves as an alternative to the white institutions that kept them out.”

The exhibition covers the years until 1982, focusing on 14 photographers — the core group as it stood in 1973, memorialized in a collective portrait by one of them, Anthony Barboza. It presents work they made in New York City and beyond — some in the South, others on military service, or following political or cultural interests to Africa and the Caribbean.

Even as their images reflected great forces shaping culture and society — radical politics, the Civil Rights movement, jazz — the Kamoinge members led with aesthetics. DeCarava, Kamoinge’s director in 1963-65 — not exactly a regular member, more a respected teacher — recognized that instinct and validated it.

“Roy said when he came to the group, ‘Man, you guys are trying to do art,’” said Mr. Walker, who grew up in Harlem and picked up photography as a teenager from an uncle who sold snapshots of patrons in bars. “That was one of the most inspirational things I heard in my life.”

In telephone interviews, several Kamoinge elders, now in their 70s and 80s, reminisced about how they learned from one another. (They named the group for a Kikuyu concept cited in “Facing Mount Kenya” by the Kenyan leader Jomo Kenyatta, translated as “a group of people acting together.”)

“We met every Sunday and talked about art and music,” Mr. Cowans said. He recalled introducing the group to the films of Akira Kurosawa, as well as giving assignments: “Shoot shadows. Shoot snow.”

Mr. Barboza, who arrived from New Bedford, Mass., right after high school, was the youngest member at first. “My college was Kamoinge,” Mr. Barboza said. The weekly gatherings were convivial, hosted at members’ apartments, with jazz on the stereo, but the critiques were arduous, he said. “A person would come in and put their work up, and some of them went home crying.”

“The critiques were severe but they were accurate,” said C. Daniel Dawson, who joined Kamoinge in 1972 but was already a photographer and curator in the Black Arts movement. “It was more like coming home, a really secure place to develop your ideas.”

Ming Smith, the first female member, also joined in 1972. “People say, ‘How did it feel to be the first woman?’ but that was never on my mind,” Ms. Smith said. “I remember feeling, this is a very different group of people, because they were funky, down guys.”

Not all in the show are alive to see it. Herman Howard, who served in Vietnam, died in 1980; Calvin Wilson, in 1992; and Ray Francis, in 2006. Albert Fennar, the member most drawn to abstraction — influenced by his time stationed in Japan — died in 2018.

Louis Draper, who died in 2002, was an anchor. The short texts introducing the group’s formal portfolios, in 1964 and 1965, are signed by him. He is front and center in that 1973 group portrait, looking serene.

“Lou was everything,” Herb Randall, his friend since 1958, said simply.

Born in Richmond, Va., Draper dropped out of college in the mid-1950s to pursue photography in New York. He worked as a darkroom technician and studio assistant, including for the noted photojournalist W. Eugene Smith. This show’s 1982 bookend marks the moment when Draper moved to New Jersey, settling into teaching at Mercer County Community College.

The seeds of this show were planted when the Virginia Museum of Fine Arts (VMFA) acquired his archive in 2015. Sarah Eckhardt, the curator of modern and contemporary art, made numerous visits to Kamoinge members, digging through troves of materials. (The VMFA presentation, and the magisterial catalog Ms. Eckhardt edited, are subtitled “Louis Draper and the Kamoinge Workshop.”)

In keeping with the workshop spirit, the show proceeds by themes, grouping together, for instance, their images of Harlem community life, or their experiments with abstraction, or their approach to political events. “I wanted to highlight the aesthetic dialogues, to get a sense of actual conversations as they were showing each other their work,” Ms. Eckhardt said.

In photographs of children, for instance, Kamoinge took a familiar trope — the outsider fixation on kids in poverty — and replied to it. Rather than paper over the conditions, they read them richly, finding ironies in street signs and cryptic correspondences (as in Draper’s “Boy and H, Harlem,” 1961, in which the subject is seen from a distance, a small figure passing the letter H painted on a building’s facade); lending the subjects blurred energy (Howard’s “Sweet as a Peach,” 1963) or shadowy weight (Beuford Smith’s “Boy on Swing, Lower East Side,” 1970).

The work is replete with echoes — the skewed cross on a storefront church door (Cowans’s “Little Flower Baptist Church,” 1962, and Beuford Smith’s “Sunday, Harlem Woman,” 1966); the slouch on a man in a hat in Fennar’s “Out of the Dark/Bowery,” 1967, and on a small figure in the snow in Cowans’s “Footsteps,” from 1960.

Kamoinge photographed politics indirectly. Mr. Draper’s 1963 photograph of Malcolm X almost envelops the subject in shadow; his photograph of Fannie Lou Hamer in Mississippi in 1971 fills the frame with her face. Mr. Cowans’s “Malcolm Speaks” is shot from a high window, the speaker too small to identify.

“We were caught up in the drama of what was going on around us, and was about us, so we had to be there,” Mr. Cowans said. Yet their instinct was to reframe events toward regular people. When Mr. Randall documented the Freedom Summer of 1964 in Hattiesburg, Miss., he emphasized the community’s daily life.

Though documentarians, the Kamoinge photographers were students of form, as seen in occasional experiments with the nude figure: Mr. Cowans’s sculptural “Egg Nude” (1958), and Mr. Francis’s undated “Untitled (nude),” breathtaking in curve and line. And Mr. Fennar in particular had an eye for abstraction, shown in “Salt Pile” (1971), and the enigmatic “Sphere,” from 1974.

They were also music fans — perhaps more than of their own craft. “The highest order of all was music,” Mr. Dawson said.

Ms. Smith’s two images of Sun Ra, captured front and back in an ecstatic whirl, and Herb Robinson’s regal study of Mahalia Jackson, her hand on a piano’s rim, convey these artists as vessels of transcendent meaning.

Conscious of their historical role, Kamoinge members actively sought to document and disseminate Black photography. In 1973, the first edition of the Black Photographers Annual, founded by Kamoinge’s Beuford Smith, featured 102 photographers and an introduction by Toni Morrison.

Their own careers were relatively obscure, made of teaching, freelancing, or various day jobs. Mr. Robinson built a commercial practice, and Mr. Barboza a studio specializing in glamorous album covers and magazine portraits.

Kamoinge’s influence was at once powerful and narrow. By the early 1980s, figures who would go on to great acclaim in Black photography — like Carrie Mae Weems, Dawoud Bey, or the scholar Deborah Willis — had sought out members of the collective, and learned from them. But interest from mainstream museums is only recent. Mr. Walker’s archive was acquired by the Library of Congress this year.

Ms. Eckhardt said she hoped the exhibition would fill a gap in the canon. “My greatest hope is that when you get the history of photography in the 1960s, Kamoinge is in it,” she said.

Kamoinge is still active: It re-energized in the 1990s and has added new members regularly since then, for instance the photojournalists Ruddy Roye and Laylah Amatullah Barrayn. Whether part of the official group now or not, the elders describe the relationship as an enduring family. To be finally in the limelight, they said, is welcome and also bittersweet.

“It’s a drag that I’m 80 years old,” said Mr. Walker, who fought off Covid-19 this year. “Kamoinge kept me going, and I suspect others, through all these years,” Mr. Randall said. “Let’s put it this way: I appreciate what’s happening now, but I know how I got here.”