This article is part of our latest special report on Museums, which focuses on reopening, reinvention and resilience.

When Brad Carney sketched the plan for a 15,000-square-foot ground mural in downtown Reno, Nev., he wove in design elements from the area’s railroading heritage, and pulled hues and motifs from nearby buildings and landscapes, including the state flower and the famed Reno Arch.

“I wanted to make it specific and unique to its place, so that this mural couldn’t exist anywhere else,” said Mr. Carney, an artist based in Philadelphia known for his playful, large scale and brightly colored public works.

“When I design murals,’’ he added, “I like to become a vessel for a community and a neighborhood, and not bring too much of myself until I find out what they’re looking for. The point of public art, to me, is the process of involving the community.”

Locals have weighed in with ideas and feedback. Volunteers from nearby art schools and organizations will be on site in early June to assist with drawing the outline, and 300 local volunteers — about 60 a day — have signed up to help paint during the week-long installation. “If this wasn’t Covid” Mr. Carney said, “I would ask anyone who was walking by, ‘Hey, you want to paint with me?’” 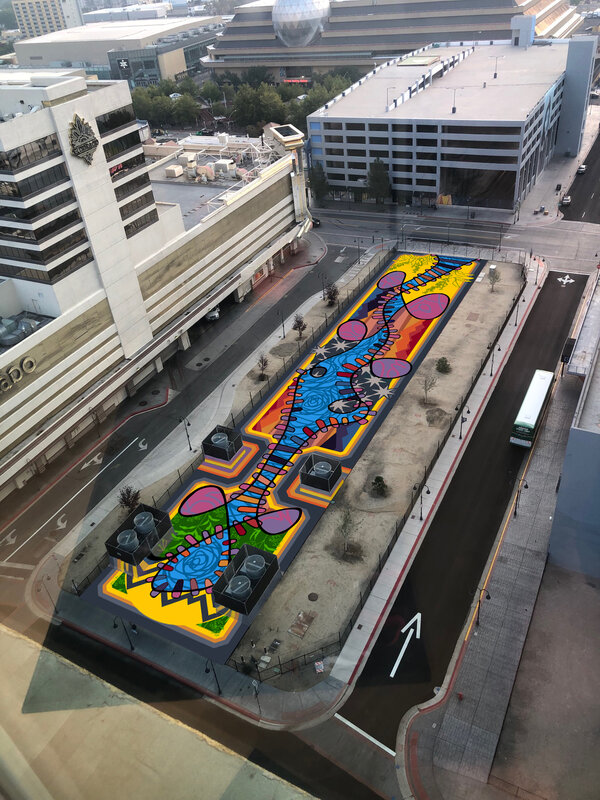 Reno is one of 16 small and midsize cities across the country where artists and local residents are taking to the streets — from crosswalks to underpasses — to add new color to old blacktop and pavement with eye-catching urban art as part of Bloomberg Philanthropies’ Asphalt Art Initiative. Grants of up to $25,000 are helping cities create and implement relatively low-cost public art projects to revitalize their streets and public spaces by making them more beautiful, more inviting and safer.

“Locomotion: A City in Motion,” the Reno mural, will be painted in ReTRAC Plaza, a little used concrete and dirt space once covered in train tracks being developed as a hub for local events, Mr. Carney said, from music festivals and farmers’ markets to movie nights.

“We want to try and help cities do wonderful things to their public realm,” said Kate D. Levin, who oversees arts programs for Bloomberg Philanthropies and was commissioner of the New York City Department of Cultural Affairs. And especially now, as cities reopen, “there’s a social cohesion goal that I think has only gotten more urgent,” she said. “Why not use projects like this to actually let people be involved, create a sense that public space belongs to everyone?”

The goals are to support local working artists, community groups, businesses and government on collaborative infrastructure projects to make streets safer; to activate public space in ways that are “as robust and reflective of local identity and aspirations as possible,” Ms. Levin said; and to promote community engagement, “because a streetscape isn’t theoretical, it runs through people’s lives.”

The initiative was inspired by improvements in the Times Square area during Michael R. Bloomberg’s tenure as mayor of New York.

“When we closed Broadway to cars and opened it to pedestrians in 2009, we saw the potential hidden in 2.5 acres of gray asphalt,” said Janette Sadik-Khan, a former commissioner of the New York City Department of Transportation and now transportation principal at Bloomberg Associates, the pro bono consulting arm of Bloomberg Philanthropies, which advises mayors around the world. “Streets make up more than 80 percent of a city’s public space, so they’re really the front yards for millions of Americans.”

Three cities began or completed installations in late 2020: Kansas City, Mo; Saginaw, Mich.; and Norfolk, Va. The remaining 13 are expected to finish their projects this year. Through mid-May, the cities have transformed a combined 26,000 square feet of streetscape with artwork and engaged more than 1,500 residents and 72 artists in the design and installation process.

“So many U.S. cities have underpasses that, whatever the original intent, turned into real barriers, and divided neighborhoods in ways that often aren’t very positive,” Ms. Levin said, expressing hope that the art projects “can create a gateway instead of an impediment.”

Teal Thibaud, director of the Glass House Collective, a nonprofit that works in an underserved neighborhood in East Chattanooga, Tenn., said even small improvements could help spawn others, especially in an area that had received limited infrastructure investment in recent years.

The Bloomberg-funded mural, completed in April, helped beautify the area, and several grants from local foundations, which increased the overall project budget to $60,000, enhanced the area in other ways.

A new street park next to the asphalt mural that created a safe gathering space, fence art to slow traffic near the elementary school, and painted stencils on sidewalks to encourage school children and other residents to follow the safest local routes were among the projects, said Ms. Thibaud. “We’re starting to see it all work together.”

Stop signs and traffic-calming measures like bollards and planters to extend the curbs and narrow the driving lanes, and the community-painted mural “blended into a unique project that is not only beautiful, but also drastically improved safety,” said Mr. Netsell, who worked on the project in partnership with the Kansas City’s Public Works Department and Midtown KC Now, a nonprofit local community improvement organization.

Soon after installation, foot traffic increased, overall vehicle speeds declined by 45 percent, street crossing times for pedestrians were cut in half, noise level dropped by about 10 decibels and the share of pedestrians who said they felt safe crossing the intersection increased to 63 percent from 23, Mr. Netsell said.

“Safety doesn’t have to be mundane and boring,” Mr. Netsell said. “We’ve proven that we can make our intersections and streets much safer, but we can also make them really fun and vibrant. It’s something that all local communities can do.”