One performer turned down his nomination. One musical was there only because it had been barred the year before. One not-nominated director was mentioned so many times in acceptance speeches that some people thought he was dead.

The year 1969 saw its share of turmoil all over America, and the Tony Awards broadcast — in which one honoree alluded to “this rather difficult, confusing, disturbing time” — was no exception.

Nominated for best featured actress in a musical for “Canterbury Tales”

I had a dream the night before that I didn’t win. In the dream, Bobby Morse came on stage and apologized to me! He said, “I’m so sorry, Sandy, but Marian Mercer is the winner.” So I pick up the program the next day at the ceremony, and what do you know? Bobby Morse is the presenter. I knew right then that I wouldn’t win. At least I was prepared.

Marian Mercer did win the award, for “Promises, Promises.”

Nominated for best featured actress in a musical for “Zorba”

It was a very long rehearsal, so we got to hang out a lot that day. Angela Lansbury was doing “Dear World” in that theater [the Mark Hellinger], and we saw a lot of her. Patty Duke was right around the corner. I shared a dressing room with Lynn Redgrave, and Dustin Hoffman came by. They were playing little games in the dressing room.

Nominated for best director of a play for “Does a Tiger Wear a Necktie?”

I was excited to be recognized, and bummed that I lost. But we and “The Great White Hope” [which won best play] were powerful, hard-hitting dramas in the days when Broadway was mostly a place for musicals. 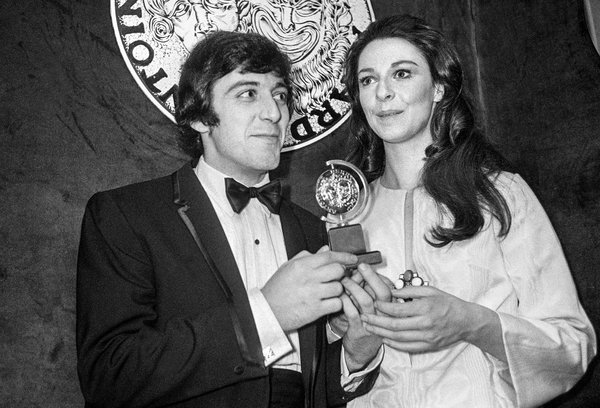 “Does a Tiger Wear a Necktie?” won one Tony — for a 28-year-old Al Pacino, as best supporting actor in a play. Mr. Schultz went on to direct such movies as “Car Wash” and “Krush Groove.”

Best actress in a musical for “Dear World”

Good God, I have no memory of that evening at all. My darling boy, I can barely remember what I was doing last week.

At the time, any actors listed above the title were considered leading actors; everyone else was featured. The ensemble billing of “1776” resulted in William Daniels’s unquestionably leading role as John Adams earning him a featured nomination, one that he refused.

I felt that it was an ensemble company, with nobody above anyone else. Billy was understandably upset with that. Howard Da Silva [who played Ben Franklin] was a pain in the ass, and he wanted to be above the title as well. But I thought this was better for the cast’s morale.

I said to Alex [frequent Tony Awards producer Alexander Cohen], “Who am I supporting?” And he had no answer for that. So I said, “Therefore, I withdraw.” It’s a leading role — there’s no arguing that. But I wasn’t heartbroken. My wife was angry, but I didn’t give a damn.

Mr. Daniels’s castmate Ron Holgate, who played Richard Henry Lee, ended up winning in the category. Mr. Daniels went on to television acclaim as the chief surgeon Mark Craig on “St. Elsewhere.” He won a 1986 Emmy for the role; his wife, Bonnie Bartlett, won that year as well, for playing his on-screen wife.

For the first time, the broadcast included abridged scenes from two Best Play nominees: Art Carney and Anna Manahan did a five-minute excerpt from Brian Friel’s “Lovers,” and more than a dozen cast members flooded the stage for a boisterous dressing-room scene from Howard Sackler’s boxing-themed “The Great White Hope,” which took the prize as well as two acting awards.

Best actor in a play for “The Great White Hope”

It was a big cast and a very supportive cast. None of us was famous at that point, and I think that helped. … The cast had debates all the time backstage, but in my mind, Howard Sackler and Ed Sherin had placed us in a different world. It was a world unto itself.

Best featured actress in play for “The Great White Hope”

We were winning all these awards, and it was unthinkable to us that Ed Sherin’s direction wasn’t even nominated. I said something about it when I won, and so did Howard and James Earl. Our faces were so long that a woman came up to me a few days later and said: “I’m sorry. I had no idea that your director had died!”

Then as now, the musical numbers provided much of the evening’s sizzle. Among them were the boisterous “Life Is,” which opened both “Zorba” and the NBC broadcast; medleys from “Hair” and “Promises, Promises” (featuring Donna McKechnie in “Turkey Lurkey Time”); and the “1776” ballad “Momma, Look Sharp.”

“Life Is” was the first thing we wrote for the show. We had to cut several minutes out of it for the Tonys, but it still had the essence of the sequence. I don’t remember anything beyond that number, which is a testament to the selfishness of writers.

I chose to do “Momma, Look Sharp” because it was antiwar. Later on, President Nixon invited us to the White House to perform the show, but he insisted that we cut that song. I was friends with Bill Safire, who was one of Nixon’s speechwriters, and he intervened. Nixon finally relented, and we performed the show — the entire show — in the East Room.

“Hair,” which had opened at the very end of the previous season, was informed that its opening missed that year’s Tonys cutoff. Lawsuits were threatened, and by the time the 1969 ceremony was broadcast, it had been a smash hit for a year (enough time for Diane Keaton to be nominated for “Play It Again Sam,” the show she did after leaving “Hair”).

Two presenters mispronounced the names of members of the show’s creative team on the air, and the derision from many of the participants, among them Carol Burnett and Zero Mostel, was notable.

We weren’t up for the award the first time around, and even a year later, we were not accepted. They didn’t give us a rehearsal or a sound check! I think a lot of people there felt that we were a bunch of amateurs and didn’t need to rehearse. It was very hurtful.

We were treated very shabbily. We had to rehearse on our own down in the women’s room. I remember Pearl Bailey being very nice to us and then saying something nasty to Ethel Merman about how unprofessional we sounded. Yeah, because we didn’t get a sound check! Some of the people who were politically forward, like Vanessa Redgrave and Harry Belafonte, were very supportive that night. But a lot of others were extremely, let’s say, retro.

Nominated as best actor in a musical for “George M!”

That language, those sounds, those drugs, the whole thing: “Hair” was just so different and exciting — and, for some people, a bit scary.

With just 15 competitive awards given out — not quite half of the 2019 haul — the 1969 ceremony had room for five special trophies, with honorees including Leonard Bernstein and the Negro Ensemble Company. And the list of presenters ranged from Arthur Miller to Ethel Merman to Godfrey Cambridge. As it turns out, however, William Daniels wasn’t the only no-show that evening.

The Tonys weren’t as big a production then. I had just been touring in Japan, and so I took a few days off and relaxed in Hawaii. But I watched the TV broadcast.

Paul Jabara and I had minor injuries and didn’t think it was any big deal, so we hung out in his basement in Brooklyn and watched it on TV.