With the pandemic making packed red carpets and large, glitzy gatherings impossible, almost no one knew what the 72nd Primetime Emmy Awards ceremony would look like going into Sunday night’s telecast.

Turns out it reflected what much of life has looked like for the past six months or so: People sequestered in their homes, interacting awkwardly over glitchy broadband connections.

Along the way, there were awards show hallmarks, like a monologue from a tuxedoed host (albeit in a mostly empty arena), some stilted banter, bits that fell flat and a few moments of genuine poignancy. But in general, the 2020 Emmys, like most of us, did the best it could under extraordinarily challenging circumstances. Here are some of the night’s defining themes, shows and moments. — JEREMY EGNER

‘This isn’t a MAGA rally’

It was a disorienting opener for disorienting times. Jimmy Kimmel, the ceremony’s host, initially seemed to be delivering a fairly routine opening monologue, with pauses for laughter and cuts to the star-studded audience.

“You know what they say,” he began. “You can’t have a virus without a host.”

But the applause? Fake. The cuts to the crowd? Those were clips filmed during past awards shows. After a few minutes, Kimmel dropped the ruse as cameras revealed an empty Staples Center: “Of course we don’t have an audience,” he said. “This isn’t a MAGA rally.”

The seats weren’t entirely empty, though. Spread among the front rows were life-size cutouts of several nominees, who in any other year would have attended the ceremony. Among them, however, was the real Jason Bateman, sitting stock-still and trying to pass for cardboard.

“I haven’t left the house for six months,” he pleaded when Kimmel advised him to leave for safety reasons. “I want Mario Lopez to ask me about my pants.” — SOPAN DEB

Everything goes to ‘Schitt’s Creek’ 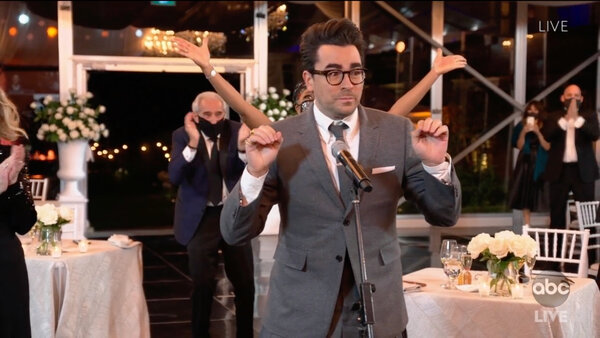 The Emmys lined up dozens of live feeds from nominees in locations all over the world, but in the first part of the show, the only one it needed was in Toronto: The Canadian sitcom “Schitt’s Creek” swept the comedy category, taking home seven wins. The show won a total of nine Emmys for its sixth and final season, the most ever for a comedy in a single year.

Catherine O’Hara kicked things off with her first acting Emmy win for playing the wig-obsessed diva Moira Rose. “I will forever be grateful to Eugene and Daniel Levy for the opportunity to play a woman of a certain age — my age — who gets to fully be her ridiculous self,” she said as she accepted her statuette at the show’s party in Toronto.

Then came “Schitt’s Creek” wins in every comedy category presented on Sunday, including acting awards for the rest of the Rose family — Eugene Levy, Daniel Levy and Annie Murphy — and others for writing, directing and best comedy series.

“This has been the greatest experience of my life,” Daniel Levy said of making the show. “This is completely overwhelming.” — SARAH BAHR

The banter is always the cringiest part of an awards show, and yet that seemed to be the one segment that wasn’t adapted for the pandemic era ceremony.

The remote acceptance speeches worked really well, and award presentations from essential workers — doctors, a rancher, a UPS delivery driver — struck a reasonably reverent tone. But the on-site banter was the same brittle jokes in the same rote rhythms as usual, just to an empty theater and egged on by only Jimmy Kimmel. — MARGARET LYONS

Calls for justice and to get out and vote

The death on Friday of Justice Ruth Bader Ginsburg wasn’t explicitly mentioned until over an hour into the show, when Regina King said, “Rest in power, R.B.G.,” while accepting her lead actress Emmy for “Watchmen.” Calls to vote, though, were plentiful during the night, including from King.

Tracee Ellis Ross, who was nominated for “black-ish,” said: “Stay safe, make a plan for voting, wear a mask.” Daniel Levy, of “Schitt’s Creek,” and Mark Ruffalo, who won for “I Know This Much Is True,” also emphasized the importance of making a plan for voting during a pandemic.

Another recurring theme was racial justice. King wore a shirt bearing the likeness of Breonna Taylor, the 26-year-old emergency room technician who was killed by police in Louisville, Ky., in March. Uzo Aduba, who won for her role in “Mrs. America,” also wore a shirt paying tribute to Taylor. The creator of “Watchmen”Damon Lindelof’s shirt read “Remember Tulsa ’21,” a reference to the 1921 Tulsa Race Massacre. And Sterling K. Brown wore a Black Lives Matter shirt featuring a raised fist.

One of the most fervent messages of the night was delivered by Anthony Anderson, who was also nominated for “black-ish.” After recognizing the “record number of Black Emmy nominees this year,” he invited Kimmel to chant “Black lives matter” with him. “Louder, Jimmy!” he urged. “Say it so that Mike Pence can hear it!” — MAYA SALAM

The limited series category was even more stacked than usual this year.

HBO’s “Watchmen” turned one of the most hallowed comic book titles into pulpy disquisition on systemic racism and police brutality, months before both issues exploded (again) into the national consciousness. The star-studded “Little Fires Everywhere,” on Hulu, explored white privilege and class conflict with great nuance. FX’s “Mrs. America,” about the ’70s clash over the Equal Rights Amendment, was loaded with exquisite performances, led by Cate Blanchett’s portrayal of Phyllis Schlafly.

But in the end it wasn’t even close. “Watchmen” took home four awards on Sunday, including best limited series. It also collected limited-series wins for best actress (King), best supporting actor (Yahya Abdul-Mateen II) and best writing (Cord Jefferson and Lindelof, the series creator). It won a total of 11 Emmy awards, including those given out during the Creative Arts Emmy ceremonies last week.

“History is mystery,” Lindelof said in accepting the best limited series award. “It is broken into a million puzzle pieces and many are missing. We know where those pieces are, but we don’t seek them out because we know finding them will hurt. Sometimes we cause that hurt. Maybe we even benefited from it, but we have to name it before we can repair it.” — JEREMY EGNER

A night to celebrate television. And Kia.

With the largely remote structure, this year’s Emmys would seem to present an exceptional logistical challenge: How are these statues being delivered?

Alas, the only answer we got to that question came in the form of an extended Kia ad, embedded within the awards show. Crass commercialism degrades us all, product placement is a scourge and replacing genuine information with joyless sponcon was a particularly irritating choice in this case.

On a show that claims to celebrate artistry in television, why embrace one of the medium’s least creative vices? — MARGARET LYONS

‘This quilt that is America’

Tyler Perry received one of the Television Academy’s top honors on Sunday, the Governors Award, which for him was effectively a lifetime achievement award.

In his acceptance speech, he told a rousing story about a quilt his grandmother gave him and the ways it was emblematic of his own life, and of the broader Black experience in America. Perry didn’t understand the quilt’s significance when he received it at age 19, he said, but years later he finally did. “I became so embarrassed,” he confessed.

“Here I was, a person who prides myself on celebrating our heritage, our culture, and I didn’t even recognize the value in my grandmother’s quilt,” he explained. “I dismissed her work and her story because it didn’t look like what I thought it should.”

“She’s younger than Baby Yoda and she already has an Emmy,” Jimmy Kimmel said after a visibly shaken Zendaya, 24, became the youngest Emmy winner for best lead actress in a drama. She won for her role as Rue on “Euphoria,” the HBO drama about high-school students navigating love, sex, drugs and identity conundrums.

“This is pretty crazy,” Zendaya said as she clasped her hands over her statuette.

The Disney-actress-turned-drama-star beat out the category’s other nominees Jennifer Aniston, Olivia Colman, Sandra Oh and Laura Linney to claim the award — not to mention the incumbent winner, Jodie Comer, who set the record last year when she won for “Killing Eve” at age 26.

“Thank you to all of the other incredible women in this category,” Zendaya said. “I admire you so much.”

The actress also said she was inspired by others her age who were working to make a difference in the world. “I just want to say that there is hope in the young people out there,” she said. “To say to all our peers out there doing the work in the streets: I see you, I admire you, I thank you.” — SARAH BAHR

A moment of catharsis

You couldn’t escape the Covid-19 pandemic in Sunday’s Emmys, from the patchwork of remote acceptances to the essential-worker tributes to the social-distancing jokes. But there wasn’t really a moment that offered the audience some collective catharsis amid a catastrophe that has killed hundreds of thousands.

Then H.E.R. unleashed an incendiary cover of “Nothing Compares 2 U,” reimagined from a ballad of heartbreak into one of loss, for the In Memoriam tribute. There were entertainment giants in the reel, as there often are, but this year the segment felt like it was about more than that — all the loves taken away, and still being taken away, in Hollywood and far from it. — JAMES PONIEWOZIK

When it was time to give out the award for best drama, the last clumsy bit of the night gave way to one of the ceremony’s wittiest speeches.

Sterling K. Brown is as charming as they come. But as the presenter for the big award of the night, he went with — or was saddled with, depending on whose idea it was — an overlong gag in which he pretended he thought his show, the weepy NBC drama “This Is Us,” had won the award. (It wasn’t even nominated.)

The actual winner was HBO’s acid dynastic saga “Succession,” which dominated the drama category. Fortunately Jesse Armstrong, the British writer who created the show, turned things around with a clever, politically barbed acceptance speech that inverted the usual platitudes by “un-thanking” some of the pandemic’s major players.

And so on. It was a funny, final acknowledgment of how profoundly life has been disrupted this year and, as such, was probably the best possible conclusion for the 2020 Emmy Awards. — JEREMY EGNER