Note: Streaming services occasionally change schedules without giving notice. For more recommendations on what to stream, sign up for our twice-weekly Watching newsletter here. 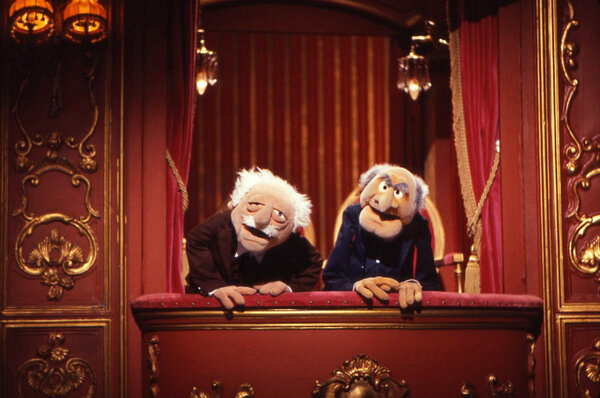 Fans of the puppeteer and filmmaker Jim Henson have been waiting a while for his TV series “The Muppet Show” — perhaps his most enduring masterpiece — to arrive on a subscription streaming service. For five seasons and 120 episodes between 1976 and 1981, Henson and his team of writers, craftspeople and performers brought joy and whimsy to the small screen, through the conceit of a low-rent variety show run by high-strung weirdos. From its catchy songs to its string of A-list guest hosts (including pretty much every big-name entertainer of the era), “The Muppet Show” helped define the popular culture of its time while always remaining family-friendly. The complete series has never been released on any home video format and isn’t currently running on any U.S. cable network, so this addition to Disney+ is a major event.

In his films “Another Earth” and “I Origins,” the writer-director Mike Cahill has pondered big ideas — alternate universes, the existence of God — via muted character studies which skirt the edges of science fiction. In his latest movie, “Bliss,” Owen Wilson plays Greg, a mopey divorcé who is in the middle of one of the worst days of his life when he meets Isabel (Salma Hayek), a homeless eccentric who convinces him they are living in a computer simulation, controlled with the help of special crystals. Is she right? Or are Greg and Isabel both mentally ill drug addicts? Cahill keeps this question unanswered for as long as possible, while making both scenarios seem plausible. What results is a strange trip through multiple realities, moving at a faster pace than Cahill’s earlier films but still ultimately concerned with the existential angst of ordinary people.

‘Tell Me Your Secrets’

The secrets in the title of the mystery/suspense series “Tell Me Your Secrets” are buried deep, and unearthed slowly over the course of the show’s 10-episode first season. Across multiple interwoven plotlines, the creator Harriet Warner follows three main characters: a woman in hiding (Lily Rabe), a mother (Amy Brenneman) doggedly fighting to find out what happened to her long-missing daughter and a psychopath (Hamish Linklater) offering his help to law enforcement to atone for old crimes. The sometimes surprising and often grim details of the connections between these people and the mistakes they are trying to make up for drive the narrative of a crime show that’s about how hard it is for the victims of violence and trauma to move on with their lives.

“The Map of Tiny Perfect Things”

Likely to be a strong contender at the Academy Awards this year, the slice-of-life drama “Nomadland” is a vivid and emotionally affecting depiction of a growing American subculture: people who live in mobile homes and roam the country, working a succession of seasonal jobs. Frances McDormand plays a recent widow who had worked most of her life at a plant that closed and who now has to adjust to living on the road, with the help of some fellow travelers who’ve turned their paycheck-to-paycheck circumstances into a quasi-communal lifestyle. The writer-director Chloé Zhao — loosely adapting Jessica Bruder’s nonfiction book — avoids big confrontations and heavy plotting, instead emphasizing the everyday stresses and unexpected wonders of a life on the edge.

‘The United States vs. Billie Holiday’

The source material for the historical drama “The United States vs. Billie Holiday” sets it apart from a typical biopic. Instead of covering one person’s entire life, the director Lee Daniels and the screenwriter Suzan-Lori Parks have adapted passages from Johann Hari’s book-length exposé, “Chasing the Scream: The First and Last Days of the War on Drugs,” in which the author uses profiles of a few well-known addicts, including Billie Holiday, and dealers to critique the ways some governments have tackled the narcotics trade. The Grammy-nominated R&B singer Andra Day gives a bracing performance as the jazz legend Holiday, who so scandalized the establishment with the anti-lynching song “Strange Fruit” that — according to this raw and hard-hitting film — some reactionaries in the U.S. government conspired to use her drug habit to stifle her.

“Into the Dark: Tentacles”

The accomplished Danish screenwriter and director Tobias Lindholm tackles a bizarre recent true-crime story in “The Investigation,” a six-part mini-series about what happened after the Swedish journalist Kim Wall’s dismembered corpse was found scattered around Koge Bay in Denmark in 2017. Lindholm doesn’t dramatize the incident itself, which eventually led to the arrest and conviction of the entrepreneur Peter Madsen, who had invited Wall to interview him on his submarine right before she went missing. Instead, he follows the two cops on the case (played by Soren Malling and Pilou Asbaek) as they doggedly pursue the gruesome clues, sacrificing their personal lives in the name of justice. “The Investigation” is a different kind of procedural, detailing how the time it takes to build a case weighs heavy on both the victim’s family and the detectives.

‘Earwig and the Witch’

The animators at Japan’s venerable Studio Ghibli make their first foray into full computer animation with this adaptation of a novel by Diana Wynne Jones, whose book “Howl’s Moving Castle” was previously adapted by Ghibli’s co-founder Hayao Miyazaki. His son Goro directed “Earwig and the Witch,” the story of a plucky and bossy 10-year-old orphan adopted by a pair of curiously gruff adults who teach her more about her birth family’s history with rock ’n’ roll and the occult. Fans of the Miyazakis and Ghibli may balk initially at the look of this film, which is different from classics like “Spirited Away” and “Kiki’s Delivery Service.” But “Earwig” covers similar themes of spiritual wonder and youthful independence, and there’s something distinctive about Goro Miyazaki’s visual style, which is much simpler than Pixar’s fine detail.

‘Judas and the Black Messiah’

In 1969, Fred Hampton — the chairman of the Illinois chapter of the Black Panther Party — was killed during a police raid on his Chicago apartment following an extended federal law enforcement campaign to tag him as a dangerous radical. In the political drama “Judas and the Black Messiah,” Daniel Kaluuya gives a knockout performance as Hampton and is matched scene-for-scene by Lakeith Stanfield as William O’Neal, a small-time crook recruited by the FBI to inform on the Panthers. The writer-director Shaka King and the co-writer Will Berson capture the revolutionary fervor of the times, subtly noting the parallels to today in the raging arguments about overzealous cops and systemic racism. The film focuses on Hampton’s complex, passionate and surprisingly open-armed political philosophies, as well as on the circumstances that forced a man who might otherwise have been a devout disciple to betray him.