Every month, streaming services in Australia add a new batch of movies and TV shows to its library. Here are our picks for December.

When the director Orson Welles hired Herman J. Mankiewicz to write the script for his masterful 1941 debut feature film “Citizen Kane,” the Hollywood veteran saw an opportunity to turn his life experiences — including his personal relationships with powerful bullies like the publishing tycoon William Randolph Hearst and the movie studio boss Louis B. Mayer — into an enduring piece of cinema. Gary Oldman plays Mankiewicz in director David Fincher’s “Mank,” a look back at the tumultuousness of American politics and show business, in the years in and around World War II. Shot in softly expressionistic black-and-white, this movie is a lovely but sly consideration of how artists try to shape their times by documenting them as bluntly as possible.

Based on the short life and phenomenal career of the Tejano singer Selena Quintanilla, “Selena: The Series” goes into granular detail on how her father and manager Abraham (Ricardo Chavira) spent years booking her into low-rent fairs and house parties, trying to find the right showcase for her obvious talent. Christian Serratos plays the adult Selena, who eventually broke through to a big Spanish-speaking American audience, but then had to deal with the sometimes confining expectations of her fans and family. Equally honest and inspiring — and, refreshingly, suitable for all ages — this biographical drama is about the hard work and thought that goes into creating a superstar.

Meryl Streep, James Corden, Nicole Kidman and Andrew Rannells play faltering Broadway actors looking for a profile-boosting cause in the satirical comedy “The Prom,” adapted by the producer-director Ryan Murphy from a Tony-nominated musical. The impressive newcomer Jo Ellen Pellman plays Emma, an Indiana teen who inadvertently gets her high school prom canceled by the local authorities when she announces her intention to attend with her girlfriend. This tuneful and upbeat film mocks the pretensions and the misconceptions of both New York lefties and social conservatives as they each stake out their positions, irrespective of what the kids want.

Partly a sensationalistic soap opera and partly a hard-hitting look at the demands of a high-end dance academy, the potboiler “Tiny Pretty Things” follows a talented but unpolished young dancer (played by Kylie Jefferson) as she adjusts to the cliques and the cattiness of her peers. Based on the Sona Charaipotra and Dhonielle Clayton young adult book series — but definitely not aimed at kids — this salty drama balances the dancers’ stories against a larger mystery, involving the scandalous death of a promising student. 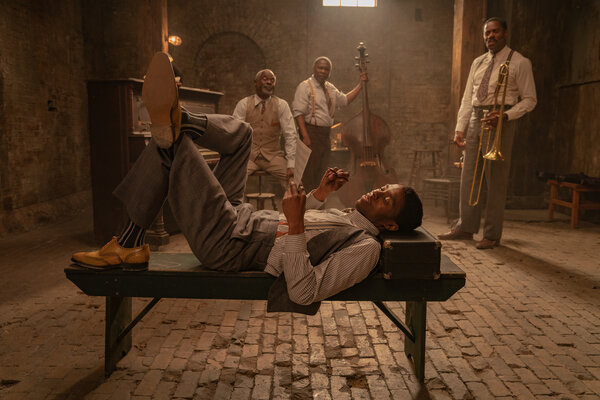 In his final screen role, Chadwick Boseman plays a smooth-talking jazz trumpeter named Levee, who bickers with his bandmates and tries to advance his own career, during one long, hot day in a Chicago recording studio. The director George C. Wolfe does justice to August Wilson’s Tony-nominated 1982 play, one of the first of the playwright’s century-spanning “Pittsburgh cycle,” covering aspects of the Black experience in America from the 1900s to the 1990s. An ace cast — led by Viola Davis as a world-weary blues diva and Colman Domingo as her fussy bandleader — brings an impressively lived-in feeling to the material. But the star of the show is Boseman, giving one of the most exciting performances of his career.

A different kind of post-apocalyptic drama, “The Midnight Sky” stars George Clooney (who also directed the film) as a loner scientist who belatedly takes responsibility for other people after a catastrophe devastates the Earth. Felicity Jones plays an astronaut on a deep space mission when the disaster strikes, who is unsettled by the lack of communication from the command centers back home. Based on the Lily Brooks-Dalton novel “Good Morning, Midnight,” this promises to be an unusually thoughtful science-fiction film about human beings trying to find each other at a time when everything seems cold and bleak.

With the series “Bridgerton,” the author Julia Quinn’s popular, Jane Austen-inspired romance novels finally come to the small screen, courtesy of the accomplished TV producer Shonda Rhimes and her longtime “Grey’s Anatomy” and “Scandal” writer Chris Van Dusen. Set in Regency-era London, the show has Phoebe Dynevor playing Daphne, one of high society’s most marriageable young women. Regé-Jean Page plays Simon, a noble who conspires with the heroine to placate their meddling elders. Julie Andrews narrates the story, which is filled with enough secrets and scandals to keep the characters buzzing amid elegant dances and tea parties.

Drawing from the many stand-up specials that Netflix debuted in 2020 — featuring comics from the U.S., Canada, Australia and New Zealand — this compilation presents the year’s best bits and jokes. It’s a collection of winning comedy that doubles as a sampler, for anyone who wants a taste of everything Netflix’s stand-up comedy category has to offer.

Bryan Cranston plays a judge on the edge in this crime thriller, adapted by the “Criminal Justice” writer Peter Moffat from the Israeli series “Kvodo.” When the judge’s son gets involved in hit-and-run accident — and when he learns that the victim belonged to a mob family — an attempted cover-up quickly gets messy, with each illicit act necessitating another. Cranston is joined by an excellent supporting cast that includes Michael Stuhlbarg, Carmen Ejogo, Sofia Black-D’Elia and Isiah Whitlock Jr., for a suspenseful story that takes surprising turns.

The “Bondi Hipsters” writer, director and performer Christiaan Van Vuuren steps back behind the camera for “A Sunburnt Christmas,” a rowdy holiday comedy set on a failing farm in the outback. Daniel Henshall takes a break from his usual dramatic roles to play a hapless lowlife who escapes from police custody in a Santa suit, and then hides out in the country with a struggling young widow and her awe-struck kids. As he pretends to be Santa Claus, the crook discovers the rewards of doing good deeds while fighting to save the widow’s farm.

Though this legal drama wrapped its seven-season, 156-episode run back in 2016, it remains one of the most pertinent depictions of modern life, detailing how the daily grind is affected by technology, political divisions, and the unceasing provocations of social media. Julianna Margulies plays Alicia Florrick, a Chicago attorney thrown back into the rough-and-tumble world of top-dollar civil and criminal law after her high-powered politician husband is humiliated in a sex and corruption scandal. Some story lines carry across multiple episodes (and even the entire series), but for the most part each chapter covers individual cases, which in the courtroom and in the lawyers’ offices raise questions about how power and influence are wielded in the 21st century.

This two-part 2017 mini-series tells the bittersweet story of the comedian Paul Hogan, who was working as a rigger on the Sydney Harbour Bridge — and was struggling to keep his wife and their five kids fed and clothed — when telling a few minutes of jokes on the talent show “New Faces” changed his life. Josh Lawson plays Hogan, whose down-to-earth, working class family man persona was tested after his hit action-comedy movie “Crocodile Dundee” made him an international sensation. This series captures some of Hogan’s ups and downs, but mostly focuses on his one-in-a-million success.

The writer-director Darius Marder and his co-writer brother Abraham — an accomplished musician — quietly meditate on the meaning of sound in their fascinating and artful drama “Sound of Metal.” Riz Ahmed is outstanding as Ruben, a recovering drug addict and heavy metal drummer who tries to live a simple life of performing at nights and hanging out with his girlfriend Lou (Olivia Cooke) by day. But when Ruben begins rapidly losing his hearing, he reluctantly retreats to a commune for the deaf, where his insistence on getting back to “normal” as quickly as possible puts him at odds with the mentors who would rather he adjust to living in silence.

In the period romance “Sylvie’s Love,” Tessa Thompson plays Sylvie, an aspiring TV producer living in Harlem in the late 1950s and early ’60s. Nnamdi Asomugha plays Robert, a saxophone player trying to make a living in New York City’s struggling jazz clubs — and trying to convince Sylvie that he can offer her a more interesting life than what her square businessman fiancé is promising. The writer-director Eugene Ashe brings the lush look and melodramatic complications of old Hollywood love stories to “Sylvie’s Love.” But what makes this movie special is its relatively low-key and realistic outlook, concerned more with everyday hopes and yearnings than with big dreams and crushing heartbreak.