The career of Elton Hercules John has been flamboyant, overindulgent, and has resulted in some of the best music ever made. “Rocketman” (in theaters Friday) uses those three things to fuel this dazzling look at his life.

Directed by Dexter Fletcher, who took over the making of last year’s rock star biopic hit “Bohemian Rhapsody” after Bryan Singer was fired, the “Rocketman” DNA is not far from Fletcher’s look at Queen. The only difference, and it’s a big one, is while “Rhapsody” felt like a stale paint-by-numbers biopic, “Rocketman” is full of life.

Taron Egerton (“Sing,” the “Kingsman” franchise) stars as John and gives an incredible performance playing him as shy Reggie Dwight from Middlesex who — thanks to his ear for music and finding a soul mate in lyricist Bernie Taupin (Jamie Bell) — reinvents himself as Elton John and goes on to become one of the biggest musicians on the planet in the 1970s.

John’s meteoric rise is filled with his hit songs that play over dance numbers that pop up throughout the movie. But we are also given the dark side of fame and John’s persona. 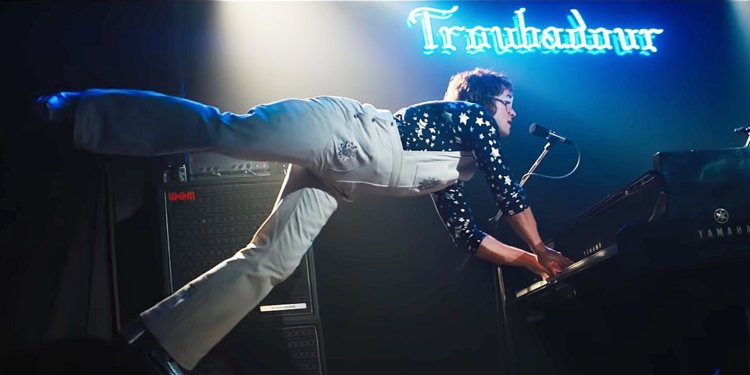 “Rocketman.”ParamountJohn, who is still troubled by the fact that he never got much affection from his parents, and is struggling with his sexuality, uses drugs and alcohol to numb the pain. He also gets into a destructive relationship with his manager at the time, John Reid (Richard Madden). For all you “Game of Thrones” fans, you aren’t going crazy: Robb Stark plays Reid in “Rocketman,” while Littlefinger (Aidan Gillen) played him in “Bohemian Rhapsody” (John Reid was also the manager of Queen).

While “Rhapsody” was criticized for not going far enough in truthfully depicting Queen frontman Freddie Mercury’s sexuality, Fletcher has it front-and-center in “Rocketman,” including the lengths John and his team went to in order to make the public think he was straight.

Read more: How “Booksmart” went from a 2009 script collecting dust to this year’s must-see movie of the summer

Egerton gives the best performance of his career to date and embodies John in every way possible. There are some shots in the movie when you have to do a double-take because Egerton looks so much like the musician. And if you know his work from “Sing,” you already know he can belt out an Elton John tune.

With “Rocketman,” Fletcher proves that when he takes on a rock biopic from start to finish, he can pull off a great movie. With elaborate dance numbers that have a CGI-added “All That Jazz” feel, the movie is part rags-to-riches story and part rock concert.