An “experiment that could forever revolutionize the way that humanity interacts with the cosmos.”

Men in NASA-branded outfits speak these lines, which are not even linked to a Jeff Bezos joke: You don’t often hear this kind of talk onstage, so having it bandied about in the new show “The Great Filter” elicits a frisson of delight for audiences drawn to the tiny intersection of the Venn diagram of theater and science fiction.

Sadly, Frank Winters’s play squanders that promise, and ends up as stuck in place as its two characters, a pair of astronauts held in lockdown after their return from an expedition. (The show, at the Wild Project through Saturday, will stream July 29-Aug. 29, with all the ticket sales donated to the Cultural Solidarity Fund.)

David and Eli (Jason Ralph and Trevor Einhorn, co-stars in the Syfy series “The Magicians”) have been kept in isolation for three weeks in tight living quarters. James Ortiz’s excellent white set has a slightly old-fashioned vibe, vaguely spacey but not antiseptic, and suggests a hazy timeline for the show: This could be an old Apollo mission we’ve never heard of, or a near future in which terraforming other planets has become a matter of survival. (Ortiz’s own play “The Woodsman,” which told the back story of the Tin Man from Oz, did quite well a few years ago.) 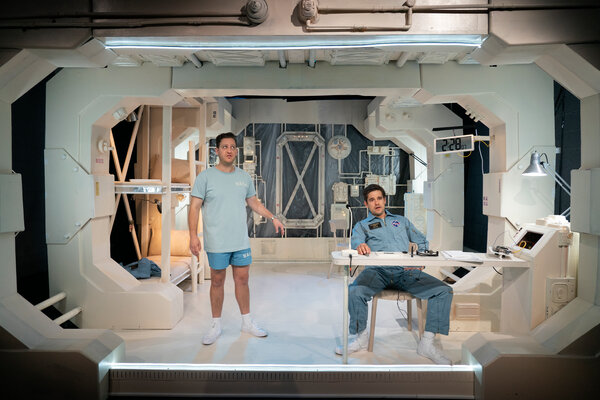 Winters does not really explore that angle, nor does he get into specifics about what Eli and David were up to in space, because his main concern is the return to Earth. One day, just before a scheduled news conference, the men are facing radio silence from the control center. Comms are dead, except for one message, equally cryptic and disturbing: “No survivors,” in Morse code.

Making things even more tense, the men notice a countdown clock in their habitat; there is about an hour left on it, and they don’t know what will happen when it hits zero.

David, the mission commander, brainstorms: “If we could somehow redirect the pressure from one of the back up generators into a J-cell unit with enough force,” he muses. But this is not “The Martian,” in which Matt Damon jury-rigged his way through hostile circumstances. Instead, we are in the kind of story where a gun mysteriously appears — what? — and building a bomb becomes an option.

While David tries to find solutions, including dumb ones (see: bomb), Eli paces around, listening to himself talk and talk and talk. He’s classified as a “specialist” but it’s unclear of what, and it comes as a shock to learn that he’s a college professor.

“The Great Filter” uneasily tries to graft together tropes borrowed from hard sci-fi and odd-couple comedy. At times you could picture John Mulaney and Nick Kroll doing an Eli and David skit, and maybe the show, which Winters also directed, if it went all in on the comedy. This would also play to the combined strength of Ralph and Einhorn — who founded the “apparel and whatnot” company Looks Like a Great Time, one of the show’s producers — and have a natural rapport that enriches the characters’ opposites-thrown-together dynamic.

As it is, the play can’t decide what it wants to do, or how, and just give us hints of what could have been. It is not lost in space, but, more prosaically, close to home base.