FOR THREE DECADES, starting in 1935, the German-American artists Josef and Anni Albers made 13 trips to Mexico; on each one, they studied the pyramids and crumbling palaces of civilizations predating the European invasions that began in the 16th century. They were drawn to the grecas, ribbons of complex geometric patterns that unfurled in sand-colored stone mosaics across the high walls at Mitla, an ancient Zapotec archaeological site in the southern state of Oaxaca. These buildings and landscapes inspired Anni to create works such as the iconic 1968 wall hanging she designed for the lobby of Mexico City’s Hotel Camino Real.

Twenty years later, when Mario Chávez Gutiérrez, 40, began weaving his first rug at the age of 8, his father, Juan, a master weaver in the Zapotec village of Teotitlán del Valle, pointed him toward Mitla as well, instructing him to recreate its stepped fret patterns. By practicing those designs, his father said, he could learn the basic techniques for the family’s two-meter-wide wooden treadle loom. Gutiérrez mastered his craft by copying his family’s designs, eventually combining them with new ones introduced by the 1980s when American rug vendors were commissioning Oaxacan weavers to make Navajo-style rugs. Gutiérrez continued to refine his skills until he could render difficult curves — relatively uncommon in Zapotec weavings — flawlessly.

In 2015, the Oaxaca City-based designer and textile artist Daniel Villela, 37, happened upon Gutiérrez’s work at the shop Huizache, run by a local artisans’ collective. Soon after, he approached Gutiérrez with a series of drawings he’d made of a traditional poncholike garment known in much of Mexico by its Indigenous name, quechquemitl. The asymmetrical patterns he’d envisioned crisscrossed the garments in straight lines and diagonals, alluding to the imperfect grid of his city. Villela was eager to collaborate with an artisan whose own work riffed on traditional patterns. “These contemporary designs force you to break your technique and rebuild it,” Gutiérrez says. “And when you successfully confront those challenges, you start to find them in every piece you make after.”

The resultant line, called Phigmento, is one among many that, in the last decade, have connected the ancestral skill of textile artisans with distinctly urban approaches to design. Rather than romanticizing Indigenous craft as a static emblem of tradition, these projects treat weaving as one of countless living art forms practiced across Mexico, evolving and changing through their encounters with contemporary design just as contemporary designers — today, as in the Alberses’ time — have been transformed by their encounters with ancient skills. 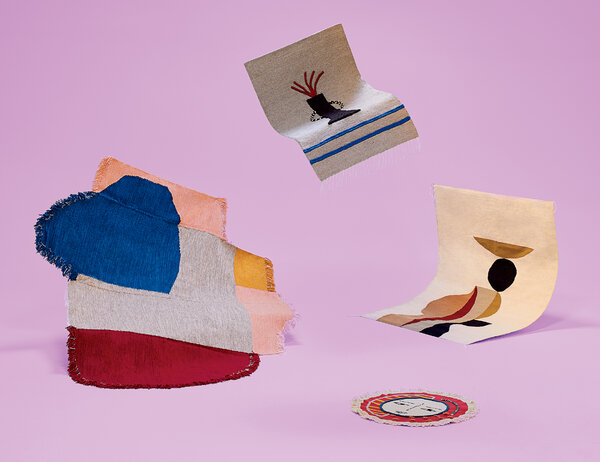 INTEREST IN TRADITIONAL Mexican textiles among artists has ebbed and flowed over the last century, from the post-revolutionary idealism of Frida Kahlo’s 1930s paintings to the gallery works of the Danish weaver Trine Ellitsgaard, who uses the loom she imported to Oaxaca from Copenhagen 30 years ago to adapt and transform the materials and traditions of southern Mexico. Indigenous textiles have also been heralded as nationalist symbols, employed by politicians and their wives as shorthand for a sympathetic (and superficial) connection to rural voters, and dismissed by an urban middle class as relics with no place in a modern nation.

The zeal for textiles today is part of a larger global nostalgia for handmade things — alongside ceramics, glassware and mezcal — as an antidote to mass production, with its history of unethical practices. Most Mexican weavers and textile artists work independently alongside their families, producing pieces for the tourist market, state-sponsored competitions and private clients, as well as for their own communities. Collaborations can generate a wide array of problems: some are undeniably colonialist, as thoughtless designers and resellers turn a quick profit by treating artisans as low-cost labor. But the best partnerships incorporate the weavers themselves as an integral part of the design process.

Consider the Dutch-Mexican designer Emma Gavaldon van Leeuwen Boomkamp, 31, who bases the patterns for her rugs, woven in Teotitlán, on the stark lines of Mexican Art Deco. By expanding, simplifying, then refracting Mexico City’s 1930s and ’40s grillwork into blocks of vivid colors, she echoes the medallions of concentric diamonds at the center of many traditional rugs. Other projects based in the country’s southern states, like Rrres Studio, run by the 33-year-old Dominican designer Javier Reyes, and M.A, from the 36-year-old Mexican artist Melissa Ávila, take the opposite approach, adapting shapes from the natural world into rugs that channel the naïve vibrancy of, say, Joan Miró’s Surrealist landscapes. In Reyes’s 2018 Inner Content series, the element of water — which a Zapotec weaver might have once represented as a zigzagging river along the rug’s border — becomes sinuous lines. In her work, Ávila takes the sun, depicted in other Indigenous traditions as a series of concentric diamonds, and gives it a human face.

Farther north, in the arid border state of Coahuila, the 32-year-old architect and designer Daniel Valero began his career in 2014 by working alongside serape weavers in his hometown of Saltillo. A centuries-old tradition, the vibrantly striped blankets may have evolved there after the arrival of Spanish colonizers and Indigenous settlers at the end of the 16th century. Serape-making reached its height by the mid-1800s, and diminished in the last hundred years with industrialization. In 2018, Valero worked with the Tamayo brothers, of one of the last remaining serape-weaving families, to create Bouquets, a series of 12 collagelike rugs that pushed formal boundaries with semicircles and ellipses that overspilled the rectangular perimeter’s edges. Sold under the project name Mestiz, the textiles are “about mixing knowledges — not just race or ethnicity,” Valero says. “Each piece is something that’s neither just mine nor just theirs, but something more.”

Such creations occupy the liminal space between art and design, tradition and modernity, city and country, abstraction and representation: boundaries that Mexico’s Indigenous artisans have always treated as permeable. After all, Mitla was a city before it was a ruin, and its ornaments — the shapes that inspired the Alberses, Gutiérrez and countless others — may have been made in cotton before they were carved from stone. Every textile, no matter who designs it and who weaves it, is therefore both a transference of knowledge — and a transformation itself.