There are no seats at the moment in David Geffen Hall, the New York Philharmonic’s home at Lincoln Center. There is no lobby, no stage, no stairs. The theater — currently in the midst of a long-delayed renovation — is a raw shell of concrete and steel; the only music within it, the shouts of workers and the deafening screech of metal being sawed.

If some part of us believes that life over the past 14 months has been waiting to be resumed more or less intact — on ice, just needing a thaw — the gutted Geffen speaks to the other part, the sense that things have fundamentally changed, or should.

Late Friday afternoon, the Philharmonic was in an empty lot at Domino Park, on the Brooklyn waterfront just north of the Williamsburg Bridge, making a rough, modest sketch of some of those changes. As construction continues at its hall, the orchestra has produced a sequel to its mobile Bandwagon program, an avatar of a more nimble, responsive, community-connected organization. 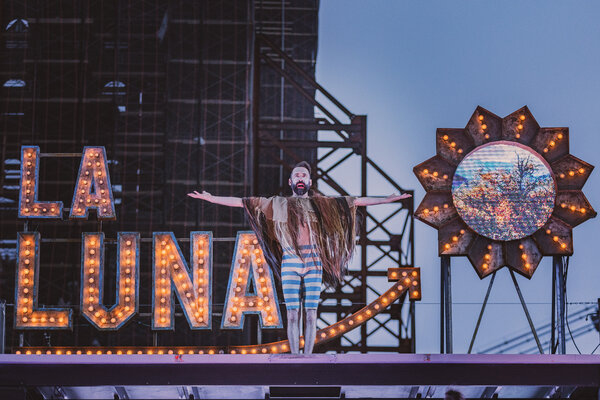 Bandwagon 1 was a rented Ford F-250 pickup truck, wrapped in red, white and black Philharmonic branding, that drove around the city over eight weekends late last summer and early fall for short, impromptu chamber performances. (“Pull-up” rather than pop-up concerts.)

Bandwagon 2 is a step forward in sophistication. It’s a 20-foot shipping container with a foldout stage, an impressively sharp video wall and integrated, superb sound and lighting. After its first few days at Domino, it will travel over the remaining weekends of May for three-day stints in parks in Upper Manhattan, the Bronx and Queens.

The key element is giving over much of the time on this mobile stage to community organizations and artists. Crucially, Bandwagon 2 is not draped in Philharmonic branding; to look at the structure, in fact, you wouldn’t know this was a Philharmonic project at all.

This reflects a new sense of how our large legacy classical arts institutions should interact with their cities. Those interactions are not new for opera companies and orchestras, but they’ve often had a permeating sense of noblesse oblige: The big symphony deigns to play at an acoustically subpar neighborhood high school or community center, and expects community organizations to bring in a local (read: diverse) audience. (This comes complete with a moralizing whiff of the “elevating power of classical music” and such.)

The real aim has been good press for the orchestra and a bit of old-fashioned, even patronizing charity work. Beyond smiles, thank yous and invitations to attend “real” concerts back at the “real” hall, the community partners — if you can call them that — don’t get much.

In recent years — and in heightened fashion over the past year — norms and expectations about such partnerships have shifted. Orchestras, taking stock of their privilege as wealthy, largely white entities, have begun to rethink the old model, the relentless focus on themselves even in activities that are ostensibly outreach.

The key phrases when Bandwagon 2 was announced last month were the desire to “center the voices of our partners” and “utilize the Philharmonic’s resources to amplify the work of our collaborators.” In less fancy terms, the orchestra is stepping back, giving over its stage and its money rather than hogging them.

Opening afternoon on Friday gave a hint of how this goes in practice. The Philharmonic’s partner this weekend was El Puente, a South Williamsburg organization that focuses on the arts as well as education, environmental advocacy and social justice.

While Bandwagon’s producer and jack-of-all-trades, the countertenor and impresario Anthony Roth Costanzo, made quick introductions, the M.C. was Esteban Duran, whose connection is to the community rather than to the orchestra.

The opening segment highlighted two artists associated with El Puente — the singer and songwriter Juana Luna and the dancer Elisa Toro Franky — with support from a guitarist and a quartet of Philharmonic string musicians in sweet, gentle arrangements of Luna’s songs. (The Bandwagon’s unobtrusive amplification system, by Meyer Sound, was crisp without harshness; even soft pizzicato plucks registered.) Then came a refined set from the group Mariachi Tapatio de Alvaro Paulino. The sense was of the Philharmonic as the host of a festival, rather than its star.

At the end was the hourlong chamber opera “Birds in the Moon,” with a score by Mark Grey and libretto by Júlia Canosa i Serra; Bandwagon’s shipping container setup was actually conceived a few years ago to present and tour this piece.

The soprano Maria Elena Altany sang with sinuous flexibility. Perhaps the opera, a parable of fraught human migrations, would have been easier to follow and might have seemed less long and slight in better weather; conditions by sunset were chilly, windy and gray on the waterfront. So it seemed like a victory on Friday to attract even a few dozen passers-by, including a strong contingent of children and dogs.

Bandwagon is an experiment for the Philharmonic, a draft of principles and values, and we will see how they become incorporated into its ongoing institutional life. “Centering” and “amplifying” cannot just be polite words to paper over the persistent lack of diversity in the orchestra, its personnel and its programming. And there remains the question of what the lasting commitment will be to its community collaborators — what resources will continue to amplify their work — once press coverage has been achieved, normal operations resume and the music returns to Geffen Hall.

There is hopefully a way of connecting the Philharmonic and New York in a way that’s rich and sustainable for the whole cultural ecosystem, in which the orchestra evolves to remain the host of a citywide, yearlong musical festival — a party that doesn’t have to end.