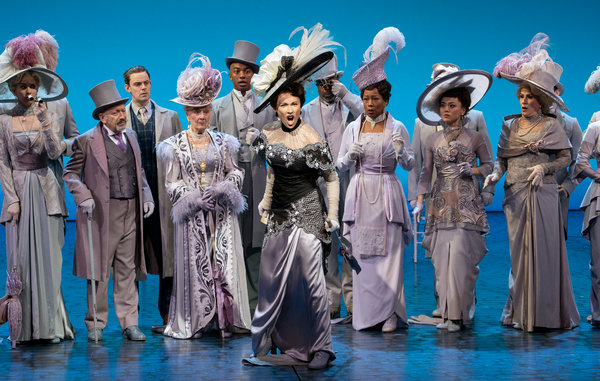 Sometimes, when a Broadway hit is both very smart and very good, it can also be very lucky. Case in point: Bartlett Sher’s exquisite revival of Lerner and Loewe’s “My Fair Lady,” which got stronger rather than weaker when it came time for a replacement cast. Last fall, when the production lost its original Eliza Doolittle, Lauren Ambrose, it got an even funnier, more affecting one in the form of the Tony-winning Laura Benanti. And when Diana Rigg left, the glorious Rosemary Harris stepped in as the mother of Henry Higgins, the fusty grump played beautifully all along by Harry Hadden-Paton.

It takes a rare confluence of talent and discipline for a musical to truly deepen over a long run, but that’s what happened with this “My Fair Lady,” which will have its last performance at the Vivian Beaumont Theater on July 7. With such a stellar cast in place — and such a bracingly humanist approach to the story of Eliza’s transformation — it’s a shame to see it go. LAURA COLLINS-HUGHES

Art: More Is More at the Institute of Contemporary Art/Boston

Taken on its own terms, minimalism can offer a serene escape from the noisy details of ordinary life. But as demonstrated in the Institute of Contemporary Art/Boston’s “Less Is a Bore: Maximalist Art & Design,” its opposite deserves just as much attention and respect. The intricately patterned background of Kehinde Wiley’s 2014 oil painting “The Sisters Zenaide and Charlotte Bonaparte,” a version of Jacques-Louis David’s portrait in which Napoleon’s nieces are replaced by two young black women, is an explicit push against the narrowly conceived Western canon in which minimalism took shape. In a wall drawing by Sol LeWitt, a riot of colors and geometries counterbalances the minimal pencil line itself. And the aesthetic rules governing the work of designer and painter Nathalie du Pasquier, including “Untitled” (1984),” vibrate and glow with a structural simplicity of their own. WILL HEINRICH

Tap invades New York City this week with the return of the incomparable Savion Glover at the Joyce Theater. Glover, who won a Tony Award for best choreography for 1996’s groundbreaking show “Bring in ‘Da Noise, Bring in ‘Da Funk,” presents the premiere of “Lady5 @ Savion Glover’s BaRoQUe’BLaK TaPCaFe.” The title may be peculiar, but it makes sense: Glover transforms the Joyce Theater into a cafe, where he will engage in an imaginary conversation with Gregg Burge, the late tap dancer who choreographed, among other things, Michael Jackson’s “Bad” video. The language, of course, is movement and rhythm. And beginning Saturday, Tap City, the N.Y.C. Tap Festival offers a week of performances, workshops and tributes. Presented by the American Tap Dance Foundation, the annual event features two “Tap Treasures” walking tours, a cruise around Manhattan hosted by the dancer Nicholas Young, a musical tribute to Duke Ellington’s life and mixed bills featuring veteran and emerging hoofers. Get set for a burst of sound. GIA KOURLAS

Film: What Lies Beneath in ‘Three Peaks’

In Jan Zabiel’s “Three Peaks,” Aaron (Alexander Fehling) would seem to be the perfect father — patiently giving swimming lessons to 8-year-old Tristan (Arian Montgomery) one moment, and teaching him to play a duet on a pump organ the next. Then, as the two are climbing the magnificent crags of the Dolomites in northern Italy, the boy calls him Papa, a term that Aaron has been longing to hear. Only he’s not Tristan’s father, Lea (Bérénice Bejo) later reminds him, admonishing her lover that her son already has one (a voice on a phone, never seen) and doesn’t need another.

That’s when the tension — abetted by mousetraps, a chain saw and monster tales — soars as high as Aaron’s beloved alps: An idyllic family vacation morphs into a quest for survival when Tristan disappears. But “Three Peaks” takes more turns, and eventually the characters descend into psychological warfare — the terrors of that creaking mountain ice are nothing compared to what lurks within a child who may not be as innocent as he appears. KATHRYN SHATTUCK

Classical Music: A Tribute to André Previn at Tanglewood

When the composer, conductor, pianist and all-around polymathic genius André Previn passed away in February at the age of 89, he left a wide-ranging legacy, the rare musician mourned by icons from seemingly nearly every artistic genre. That oeuvre included a fruitful, long-term collaborative relationship with the violinist Anne-Sophie Mutter, to whom he was married for a time. Written as an engagement present, Previn first violin concerto, full of lush strings, Hollywood harmonies and wiry virtuosity, was dedicated to Mutter (Its subtitle is even “Anne-Sophie”). This Saturday, as a tribute to Previn’s memory at the opening weekend of Tanglewood, the Boston Symphony will assay the concerto, with Mutter as soloist. Alongside a fanfare by Joan Tower and Dvorak’s “New World” Symphony, it makes for a compelling program led by music director Andris Nelsons, among other weekend highlights — including an all-Mozart opening night on Friday with pianist Emanuel Ax. WILLIAM ROBIN

This double-header — booked by BRIC as part of their Celebrate Brooklyn! Festival — pairs artists responsible for two of last year’s standout rap albums. For a series dedicated to Brooklyn, the organizers could hardly have tapped an artist more plugged into the borough than Leikeli47. On her 2018 album “Acrylic,” the Bed-Stuy native raps about the resilience of black communities, especially the women who prop them up, using the nail salon as a central metaphor; in the course of doing so, she name-checks Brownsville, the Hoyt-Schermerhorn subway station and other New York institutions, including the photographer Bill Cunningham and the E train.

Hailing from Chicago, Mick Jenkins — with whom she will share the stage — represents a city with a hip-hop scene prolific enough to rival New York’s. His most recent album, “Pieces of a Man,” draws inspiration from one of the genre’s founding fathers: the Chicago-born Gil Scott Heron. Los Angeles-based Leven Kali and Baltimore’s Joy Postell will also perform. OLIVIA HORN

TV: The Grass Isn’t Greener on the Other Side of ‘Divorce’

How the mighty have fallen!

“Things really haven’t turned out the way they were supposed to, have they?” Frances (Sarah Jessica Parker) sighs to her besties, Dallas (Talia Balsam) and Diane (Molly Shannon), in HBO’s “Divorce.” She put up a good fight. But in the end, she jokes, she lost the Battle of Hastings — the Westchester village where her marriage imploded, her gallery burned and her dreams went up in smoke.

Now, as Season 3 begins, she’s retreated to the Manhattan jungle: roaches in her Inwood apartment, her employment having gone to the birds. But Frances’s biggest hurdle just might be the impending marriage of her ex, Robert (Thomas Haden Church), to the much younger Jackie (Becki Newton), who happens to be pregnant.

Diane, meanwhile, has fallen back down to the sales floor where she worked in her leaner years, thanks to the financial skullduggery of the imprisoned Nick (Tracy Letts). And Dallas has found her patience for her therapy patients’ problems wearing painfully thin.

“Divorce,” whose first season was squirm-inducingly dark and caustic, has now settled into its own middle age. And these latest six episodes, starting July 1, find that tender, sticky spot of forgiveness — both of ourselves and of the ones we can’t help but still love.