An interactive thriller about the race for a vaccine. A morbid installation on the stage of a theater no one can visit. A literary classic set during lockdown and narrated through social media posts. This is what theater in Germany looks like in early 2021.

Nearly a year after the pandemic first shuttered playhouses in the country, German theatermakers have become increasingly adept at working around virus-related restrictions. Now, instead of the deluge of archival recordings or the broadcasts of productions planned before the pandemic, an increasing amount of digital theater is using technology to address Covid-era concerns.

A recent spate of online productions from state-run and fringe theaters have examined contemporary themes of loneliness, isolation, fear of death and our chances for beating the virus. As lockdowns throughout Germany continue to be extended — Berlin has already announced that theaters in the city won’t reopen until after Easter — it’s heartening to see directors and actors finding new ways to forge connections with remote audiences by focusing on contemporary themes, even when taking well-known works as their starting point.

Johann Wolfgang von Goethe’s “The Sorrows of Young Werther,” from 1774, is one of the foundation texts of German literature. The epistolary novel, about a young artist who kills himself because of unrequited love, catapulted Goethe to fame and jump-started the Romantic movement in Germany. (The book also inspired a rash of copycat suicides). These days, “Werther” is sometimes seen like other classics that are required reading in school: musty, quaint and cloying in its depiction of adolescent passion and confusion.

The director Cosmea Spelleken gives Goethe’s Sturm und Drang hero a refreshing update in “werther.live,” an intricately built and skillfully executed production with a live digital run through March 3 that replicates the in-person theatrical experience. This means that the show can be viewed — for a modest 4 euros (about $5) — only when performed in real time by the actors and technical team. 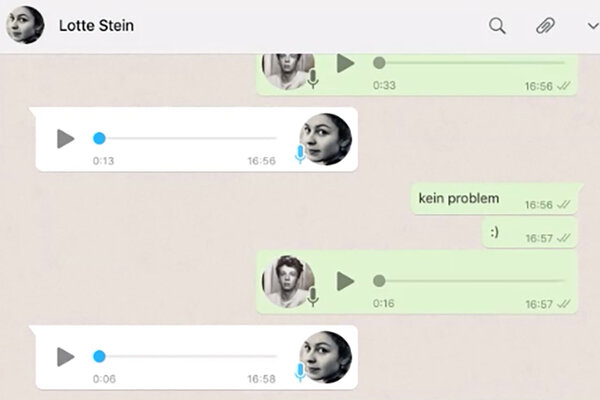 “werther.live” is a successful experiment in subjective storytelling: The audience experiences the plot almost exclusively from Werther’s perspective, via screen recordings from his computer. Over 120 minutes, we follow the novel’s four main characters through their Facebook profiles, Instagram feeds and WhatsApp conversations. Despite the 21st-century interventions, the production remains surprisingly faithful to the plot and emotional tone of the 18th-century original.

At the start of the production, Werther (Jonny Hoff), a university student, is glad that he decided to put his academic career on hold during the pandemic. In his free time, he Skypes and chats regularly with his friend Wilhelm (Florian Gerteis), who is studying in France and, the coronavirus notwithstanding, seems to be having the time of his life.

Werther, on the other hand, never seems to step away from his computer, let alone leave his room. He e-meets Lotte (the love interest in Goethe’s original) after buying an illustrated book of antique firearms (foreshadowing!) from her on eBay. Then, after some cyberstalking, Werther’s interest in Lotte becomes an infatuation.

As they trade text and voice messages and video chat, we experience Werther’s increasing infatuation with a woman he’s never met. Klara Wördemann’s Lotte isn’t cruel or calculating, but she is careless in the way she leads him on. We understand, however, that she does reciprocate his feelings, at least in part. Their video chats are shot through with tenderness, but also sorrow.

Of all the theatrical productions I’ve consumed over the past few months from my laptop, “werther.live” is among the most genuinely innovative. A manifesto of sorts posted on its website outlines the creative team’s aesthetic approach. “Filmed stages? Theater monologues in front of webcams? You’ll find none of that here. We believe that digital theater makes a new form of storytelling possible, in which the digital surfaces are actively part of the story.”

The same evening as I watched “werther.live,” I downloaded and logged in to Webex, a web-meeting app, to take part in the Nuremberg State Theater’s production of “The Doses,” an “interactive choose-your-own-adventure” by Philipp Löhle about the race for a coronavirus vaccine.

In the video chat room, I gazed around at a mosaic of participants who had punctually joined the meeting. (Others who tried to log in late were refused entry.) A man in a Guy Fawkes mask instructed us to turn off our cameras. One by one, the faces of the roughly 90 audience members vanished. For the next half-hour, we watched as three actors performed, in real time, a high-octane biological thriller that seemed at least partially ad-libbed and contained a healthy dose of humor.

In “The Doses,” a researcher, a human guinea pig and a radical anarchist scramble around a lab in search of a coveted vaccine. Each actor is equipped with a camera while navigating the research facility, and Webex’s split-screen format allows us to follow them on their increasingly frenzied quest.

The audience, too, gets to play a role, via poll questions that appear onscreen. Should the anarchist enter the lab via the door or the window? (The audience chose the window). Should she disguise herself as a cleaning woman or a cat? (A cat, obviously!) Should the researcher grab the blue or the red vaccine?

I’m not certain that the audience always chose wisely, since the short production ended in bloodshed and mayhem. Even so, if all the applause emojis in the chat window after the performance were any indication, the viewers were well pleased.

Despite their unusual formats, both “werther.live” and “The Doses” told dramatic stories, however avant-garde their means. In late January, however, Darmstadt State Theater, in southwestern Germany, put together a timely livestream that, on the surface, had little to do with conventional theater.

On the main stage of an auditorium, which has been empty for most of the last year, the German artist Gregor Schneider mounted his installation “Dying Room” (“Sterberaum”). First exhibited in Innsbruck, Austria, in 2011, “Dying Room” was conceived by the artist as a sculptural space where a person could die with dignity.

Initially, Schneider said he was looking for a real person to die in the room over the course of the exhibition. He even enlisted a doctor to help him find volunteers. But even for the outré tastes of the European art establishment, the concept was a step too far. Among the general public, it was treated as a morbid publicity stunt.

The ubiquity of death over the past year — to date, Germany has recorded over 60,000 Covid-19-related deaths — has provided a more sobering context for “Dying Room.” In Darmstadt, the installation was streamed on the theater’s website for three days and nights, and shot from three angles to give different perspectives on a modest room, with white walls and a herringbone floor, that had been constructed on the stage. In lieu of an expiring subject, Schneider himself provided the performative element: The artist, clad in all black, stayed onstage throughout the more than 70 hours of the livestream.

In this new framework, and against the backdrop of the continuing pandemic, it seemed neither tasteless nor sensational, as previous presentations were called. Instead, Schneider succeeded in creating a space for contemplation and stillness that was heightened by his own high-endurance performance. Like “werther.live” and “The Doses,” the livestream showed that art and technology, when ingeniously combined, can respond to our age of solitude and disquiet with an urgency and immediacy more readily associated with live performance.