Art fairs evolve like any other event, but the changes can be subtle. Even if you are told that striking, thematically linked treasures are on offer in a special sector, rows of gallery booths have a way of blending together.

So the organizers of Art Basel Miami Beach, taking place Thursday through Sunday for its 18th edition, are making an effort to create a palpably different atmosphere for a new sector, Meridians.

Over all, 269 galleries will be on hand in the Miami Beach Convention Center, from places as far-flung as Tokyo and Toronto. The new sector will have 33 projects arranged in the center’s Grand Ballroom and one outside the convention center.

Last year, the ballroom had only been recently completed at the time of the fair, after a three-year renovation of the center, and it held a special multidisciplinary work.

The scale of the room — 60,000 square feet of column-less space with a 26-foot-high ceiling — allows organizers to increase their ambitions about what they show, in an era when artworks seem to be growing ever bigger.

“Meridians is an inflection point in the history of Art Basel Miami Beach,” said Marc Spiegler, the global director of Art Basel, who also oversees its iterations in Basel, Switzerland, and Hong Kong.

“It puts this fair on another level; it allows us to show works of a quantity and size that no other fair can do,” he said, save for the Unlimited sector in the Swiss fair.

Mr. Spiegler added that while his team got through the complications of a long renovation process, “the Grand Ballroom was the prize we had our eyes on.”

Last year, in a rare move, the Miami Beach fair actually scuttled two sectors, Film and Public, attempting to centralize its activities in the convention center.

Organizers are always keen to distinguish themselves in a crowded field.

“The art fair paradigm has been copy-and-pasted the world over, with 200-plus fairs,” said Noah Horowitz, Art Basel’s director of the Americas and the chief of the Miami Beach fair. “We’re trying to take it up a notch.”

Meridians was curated by Magalí Arriola, the director of the Museo Tamayo in Mexico City.

“Many of the works deal with gender and race issues,” she said, citing “The Garden” (1996) by Portia Munson as a work that “ties femininity to the ecological.”

Mr. Horowitz said he was pleased that Meridians had a variety of galleries involved.

“People tend to assume that large-scale projects are only for the mega-galleries,” he said. “And we have a lot of younger galleries making a contribution.” 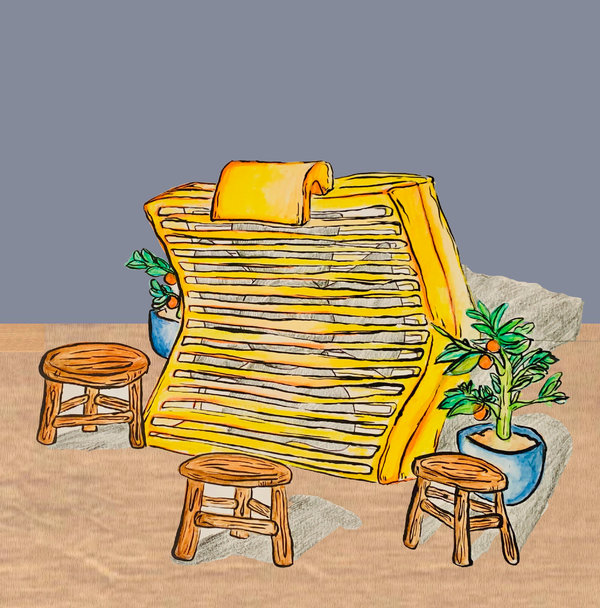 One example of that is Woody De Othello’s “Cool Composition” (2019), presented by Jessica Silverman Gallery of San Francisco and Karma of New York.

The installation imagines a humid summer day like the ones Mr. De Othello experienced growing up in Miami in a Haitian family: One of its elements is a fan cast in bronze, and there are ceramic stools.

“Woody remembers his family moving around the house based on the where the fan was,” Ms. Silverman said. “It’s a really beautiful piece.”

Ms. Silverman, who founded her gallery in 2008, also has a booth in the fair’s main sector, Galleries.

It represented a move up to the big leagues in a trajectory that is typical for many dealers. She started in the satellite fair NADA Miami Beach, then moved into the Nova sector at Art Basel.

That initial jump, she said, “increased the level of business we were able to do tenfold, not only sales but connecting with colleagues.”

One recurring element of the fair is a distinct flavor that is different from the Basel and Hong Kong editions.

“Fewer than 100 galleries do all three fairs,” Mr. Spiegler said. “In Miami, you feel the strong presence of Latin America and U.S. markets beyond New York and L.A., and that changes the character of the show.”

The fair includes eight galleries based in Mexico City, including Gaga.

Gaga’s co-owner, Fernando Mesta, said that it was satisfying to have a hometown presence.

“We all know each other, and it’s collegial,” he said, “and I would love to see more galleries from there.” Mr. Mesta added that it was a boost for the artists from the region, too.

“The fair is meaningful for the collecting of this work,” he said. “Museum committees that buy Latin American art, they do it at Miami Basel.”

Gaga previously exhibited in the Nova sector, but this year moves to Galleries with work by Cosima von Bonin, Julien Ceccaldi, Vivian Suter and Anna Uddenberg.

The first-time exhibitor Document, also representing the Windy City, will be presenting a solo show in the Positions sector of photographs by Paul Mpagi Sepuya, including “Figure (_2100934)” (2017).

Sibylle Friche, the director of Document, praised the fair for its tiered fee structure, allowing dealers to pay less per square foot for smaller booths.

“It’s great the fair allows younger galleries at a fair price,” she said. “It’s a big deal that we’re in the fair this year, and it’s a natural progression from what we’ve been doing.”

Long-established galleries like Marlborough, founded in London in 1946, are the fair’s bread and butter. In addition to its London branch, Marlborough has two New York ones, though later this month it will close its 57th Street space and expand its footprint in Chelsea by taking over a building next door.

“We do all the Art Basels,” said Max Levai, the gallery’s president. “It’s a fair we wouldn’t miss.”

“We used to bring a little bit of everything, but like many galleries we’ve found success putting forward more specific ideas for more focused curatorial resonance,” Mr. Levai said.

Mr. Katz, 92, was once represented by Marlborough, and Mr. Porter (1907-75) is simply someone the gallery staff admires.

The connection between the two is that both painters represent the figure, in their own pared-down ways.

“We just like the connection between the two artists, and it hasn’t been done before,” Mr. Levai said.

“They had a real commitment to their figural practice, at a time when people were being encouraged to do other things,” he added, referring to the heyday of abstract and Conceptual art.

For Marlborough, it comes down to creating an arrangement that will be pleasing to the people walking the aisles.

“We get a really interesting intersection of collectors,” Mr. Levai said. “Lots of Latin American buyers. Many museum curators come, too.”

For his part, Mr. Spiegler cited the top Miami collectors — some of whom helped found the fair — as engines of its success so far. Several of them operate private museums in the area, including the Margulies Collection and the de la Cruz Collection.

The Rubell Family Collection, formerly in the Wynwood district, is reopening this week in the Allapattah neighborhood as the Rubell Museum, in a new building designed by a New York–based architect, Annabelle Selldorf.

“They were going strong when the fair started, but not at the level they are now,” Mr. Spiegler said of the local patrons. “Year upon year, the art culture has steadily grown. I’d call it a healthy competition and a tropical collegiality.”