While Ivanka Trump and husband Jared Kushner seem to be distancing themselves more and more from former president Donald Trump, younger daughter Tiffany Trump may be thinking this is her moment to shine — and her wedding plans suggest that Marla Maples’ daughter, at least, has no problem aligning herself with the Donald Trump brand. Recent moves by Ivanka like her vaccine selfie and midsummer trip to Aspen amid Trump’s Dallas CPAC appearance seem geared at showing just how different from her dad Ivanka can be, but Tiffany — who has long remained more at the outskirts of Trump’s orbit than her older sister — is reportedly considering a family wedding ceremony with fiancé Michael Boulos at her dad’s very favorite place: Palm Beach’s Mar-a-Lago. 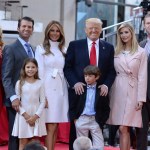 “They both want to marry in a big ceremony, your basic international spectacle,” a source tells People of Tiffany’s plans. Boulos, whom she started dating in 2018, proposed in January 2021 and has since begun eagerly planning with his fiancée. “Tiffany likes the idea of a glamorous and glitzy affair and, surprisingly, so does Michael.”

“I don’t know if they will have two big deal weddings but there could be a smaller celebration somewhere if relatives can’t make the big one,” the source added. “Mar-a-Lago would make sense even though so many people marry there…It depends when it happens and what is going on around them at the time.”

Donald Trump himself is no stranger to glitzy weddings, with his 2005 wedding to Melania Trump — also at Mar-a-Lago — attracting an A-list crowd including the Clintons, Barbara Walters, and more. Their million-dollar wedding featuring a Dior gown that had seen the cover of Vogue is probably along the lines of the “international spectacle” Tiffany is hoping for, though it must be noted that both the Trumps and Mar-a-Lago do not inspire the same reception now as they did in 2005.

Since Tiffany does appear to already be settled in Florida with fiancé Boulos, a Mar-a-Lago wedding certainly would make sense. Otherwise, we’re sure the Plaza — where Trump married Tiffany’s mother Marla Maples — would do just fine too.