In a short story, the Guatemalan composer, inventor and writer Joaquín Orellana imagines a musician who, dissatisfied with the instruments of Western civilization, sets out to create the sound of hunger. Possessed with a desire to express his people’s suffering, he progressively starves himself, then records his altered, raving voice. In his delirium, he sees sheet music staves come alive with anguished and violent cries — the sound of hunger.

Orellana, 90, is one of his country’s most respected composers and the subject of a captivating exhibition at the Americas Society, “The Spine of Music,” which showcases instruments — sculptural, Surrealist and darkly sensuous — he has invented. Like the protagonist of his story, Orellana seeks to express the suffering of a country traumatized by genocide and civil war, while largely shunning the materials of Western music. 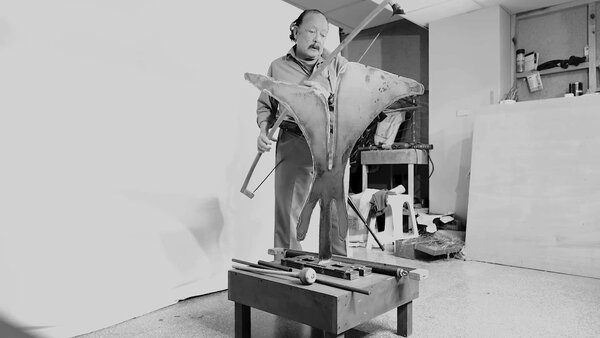 Most composers write music for instruments that already exist. One exception was Wagner, who created a tuba-horn hybrid for his “Ring” cycle. The experimentalist composer Harry Partch invented instruments adapted to his unorthodox tuning system. In a video interview from Guatemala City, Orellana spoke of his process as one of liberating the musical imagination from preconceived forms.

“The composer is imbued with his social reality,” he said. “The composer is a kind of filter, and his social sensibility is integrated into that filter.” When musical ideas flood the composer’s imagination, he added, “in that auditory mind there are the concepts and images of a social context, a sociopolitical reality; and the music is inevitably beholden to these things.”

Orellana began experimenting with the materials of sound production in the 1970s. He had studied violin and composition at the National Conservatory in Guatemala City, then won a two-year fellowship at the Centro Latinoamericano de Altos Estudios Musicales in Buenos Aires. That center was a magnet for innovative composers from across the subcontinent, with a state-of-the-art electronic music studio that fired Orellana’s imagination.

He didn’t have comparable technical resources when he returned to Guatemala. And he felt alienated from a music scene centered on folkloric traditions expressed through the national instrument, the marimba.

Still, the marimba fascinated Orellana. It had most likely come over on the slave routes from West Africa; embraced by the rural population in Guatemala, it had come to resonate with his country’s hopes, pain and injustices. So he pried it apart and twisted it into new forms.

Orellana calls his inventions “útiles sonoros,” or sound tools. “By means of the sound tools,” he said, “the marimba extends into acoustic and physical space as in a kind of Big Bang.”

The first sound tool to greet visitors to the Americas Society gallery — which is open by appointment only — is the skeletal imbaluna, with a crescent-shaped marimba keyboard backed by spiky resonators. (The names of Orellana’s inventions are often poetic portmanteaus, this one of “marimba” and the Spanish word for moon.)

The circumar is shaped like a large kettle with marimba keys suspended perpendicular to the floor. For the sinusoido, he strung marimba keys on a frame shaped like a warped roller coaster. Both are played by running a mallet along the inside in continuous motion — an action that requires full engagement of the performer’s arm and torso and produces tinkling rushes of sound. Sebastián Zubieta, the Americas Society music director, said that in Mr. Orellana’s creations, “it’s the gesture that shapes it.”

These instruments — and others shaped similarly, using metal chimes or bamboo canes — can sound uncannily like electronic music. Zubieta said it was no accident that sounds created on a circular or sinusoid instrument resemble those created through electronic looping and sequencing. “It’s like an old tape piece,” he said. “It’s a low-tech solution to an avant-garde desire.”

The ingenuity of Orellana’s inventions often hovers between playfulness and cruelty. The periomin is a kind of rocking coat rack that, when set in motion, makes wind chimes swing back and forth along strings of plastic beads, sounding like a glassy waterfall. The pinzafer is a large iron sheet, shaped like a lobster tail and suspended from an iron frame. Running a bow, strung with piano wire, through a serrated cutout produces a dark, metallic moan. Drawing a bow (this one strung with acrylic) over the tubarc, a metal chime fixed on a rectangular frame, produces a whistle sharp enough to make teeth fizz.

In his compositions, Orellana often uses his inventions alongside choral singing, taped environmental sounds and Western instruments. In 2017, he wrote “Symphony From the Third World” for Documenta 14 in Athens; he flooded the stage with adult and children’s choirs, a symphony orchestra and his sound tools. It was a rejoinder to Dvorak’s Ninth Symphony, subtitled “From the New World.”

For the Americas Society exhibition, he composed a new piece exclusively for his creations. Titled “Puntos y efluvios” (“Outpours and Dots”), it was intended to be performed by four percussionists inside the gallery, and would have invited audience members to participate at certain moments with screams, howls and cries in a language Orellana invented.

Because of pandemic limitations, Zubieta recorded each part by himself; the edited piece, with its pinprick tinkles and squalls of booming rushes, now haunts the gallery at regular intervals. An accompanying video alternates between shots of the performer engaged in the music’s ritualistic gestures and images of Orellana’s graphic score — which, with rhythmic squiggles, dot clusters and choreographic diagrams, harks back to the vision in his short story of sheet music staves melting away.

Looking back on his career, Orellana said, “Making music for me was never a determinate process, but rather a way to free myself from obsessions: the obsession to manifest sound and a certain compulsive need to get it out of me.”

“I’ve come to the conclusion,” he added, “that what I’m trying to do is liberate sound.”