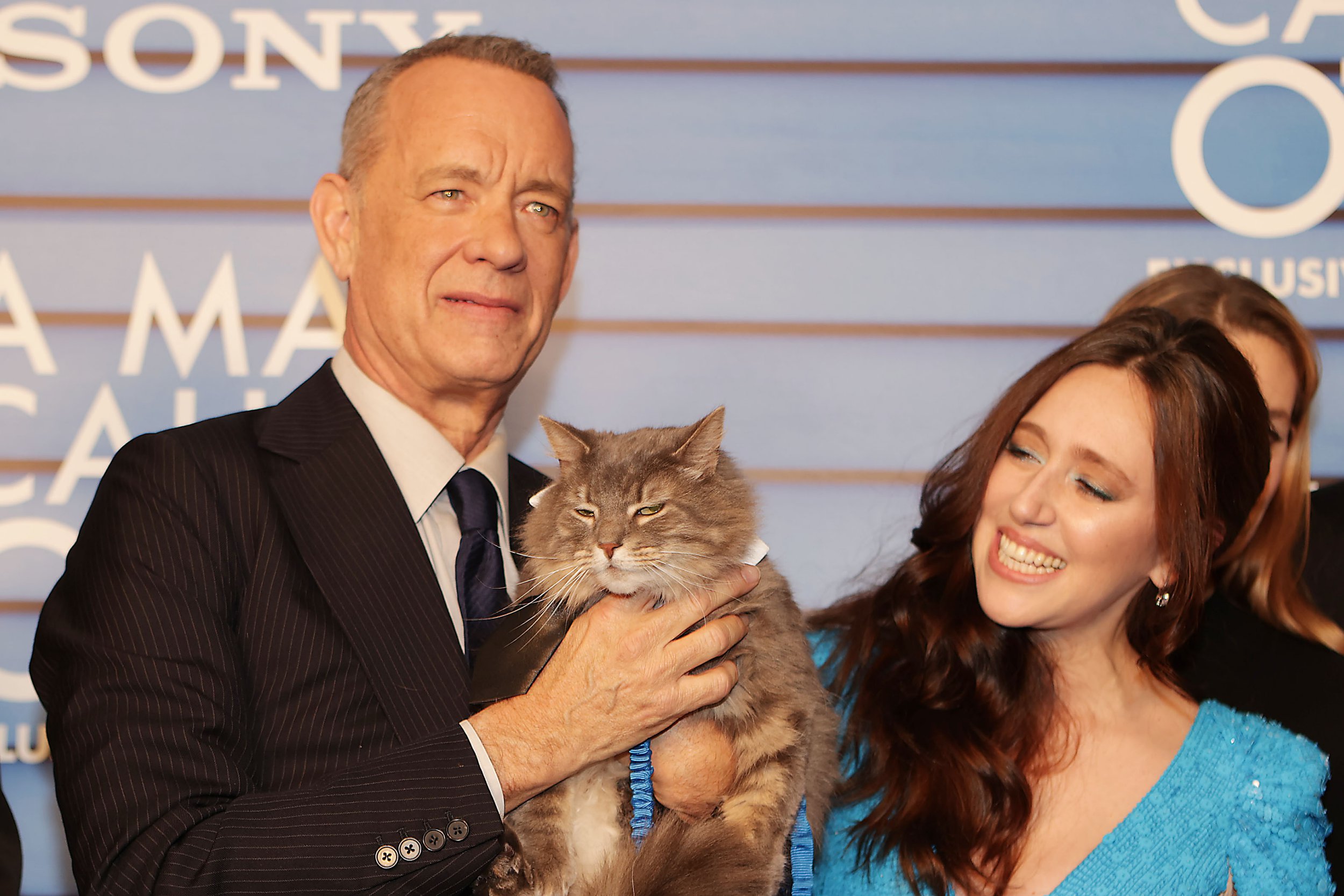 Tom Hanks has shared the screen with some major names over his glittering career, but none as adorable as new co-star Smeagol.

The Castaway star, 66, is currently starring in new film A Man Called Otto, where he plays the titular character.

And among the characters Otto meets along the way in the heartwarming movie is gorgeous fluffy tabby cat Smeagol.

(Also appearing in the film is Tom’s son Truman, who plays his younger self, with the father-of-four recently dismissing the ‘nepo baby’ discourse.)

A Man Called Otto follows Otto Anderson, played by the Forrest Gump star, a disgruntled man who no longer sees purpose in his life following the loss of his wife.

Gorgeous cat Smeagol appears as Otto’s faithful companion in the film, and this week was treated like a true star as he joined the Hanks and Wilsons on the red carpet of a special screening.

Appearing in the Dot Dash Meredith in New York City on Monday, Tom flashed a smile for the cameras as he posed with Smeagol in his arms, co-star Mariana Trevino gazing adoringly at the feline.

The acclaimed actor looked smart in a sharp black suit, white shirt and tie, while Smeagol totally looked the part as he wore a little collar and tie.

Tom cast his son Truman in the role of his younger self despite admitting he is ‘not an actor,’ but warned he would have to ‘hit all the marks.’

Speaking on the Graham Norton Show, the Toy Story legend said: ‘Truman plays my character’s younger self, but he’s not the actor in the family – he’s an artist and is going to be a cinematographer.’

‘We talked about it a lot and it was all his choice, but I said to him, ‘No matter what your last name is, you are going to have to hit the marks.’

Ultimately, Hanks said he had nothing to worry about as Truman was ‘extraordinary’ in the film, which is executive produced by wife Rita Wilson.

The actor – whose four children are all actors – did not find success because their father is a Hollywood icon, he insisted.

Speaking to Reuters via The Sun, Tom said that, by getting into acting, his kids were merely entering the ‘family business.’

‘Look, this is a family business. This is what we’ve been doing forever,’ he began.

‘It’s what all of our kids grew up in. We have four kids, they are all very creative, they are all involved in some brand of storytelling, and if we were a plumbing supply business or if we ran the florist shop down the street, the whole family would be putting in time at some point, even if it was just inventory at the end of the year.’

The film star has four children who are all in showbiz. He shares son Colin, 45, and daughter Elizabeth, 40, with ex Samantha Lewes, and Chester, 32, and Truman, 27, with Rita.