Nine years after the release of “Toy Story 3,” the lovable toys that launched Pixar into a giant in the animation space are back and show little wear.

At the start of “Toy Story 4” (opening in theaters June 20), the gang are living comfortably with their new owner, Bonnie (voiced by Madeleine McGraw). Remember, at the end of “Toy Story 3,” before Andy left for college, he donated his toys to her. The love for the toys Bonnie has is evident, but Woody (Tom Hanks) certainly isn’t the top dog in her room like he was in Andy’s. Bonnie even takes the sheriff badge off Woody and pins it on Jessie (Joan Cusack). And if that isn’t demoralizing enough for Woody, he’s discarded into the closet with the other toys Bonnie doesn’t play with much anymore.

And this is when the movie becomes great.

Director Josh Cooley (an “Inside Out” screenwriter) and the Pixar team know Woody would get upset for being neglected and would do things to get back in Bonnie’s favor. But how do you show that without rehashing the storyline of the original “Toy Story” movie when Woody is jealous of Andy’s new toy Buzz Lightyear (Tim Allen)? What if Woody befriends a new toy instead? And what if that new toy doesn’t even know it’s a toy?

You will fall in love with Forky.DisneyThis leads to one of the most touching moments in the movie (and we’re only 15 minutes in). Bonnie is upset about going to orientation for kindergarten, and Woody feels having a toy there may comfort her, though the other toys reject the idea. However, Woody sneaks into Bonnie’s backpack and goes along with her. But it’s less to be seen by Bonnie and more to give a helping hand. For instance, in arts and crafts class, when Bonnie is sitting by herself with no art supplies to make anything, it’s Woody who dives into the garbage and throws out some crayons and other materials for Bonnie to come across and create something.

And that something turns out to be Forky, who she instantly loves. Woody has now found his purpose as Bonnie’s toy: To make her happy he has to make sure that nothing happens to Forky.

But things become a challenge because Forky (voiced by “Veep” star Tony Hale) does not think he’s a toy. He thinks he’s trash because that’s where Woody originally found him. So Forky’s purpose is to get back in a trash can.

Read more: Experts say the “X-Men” franchise will rebound after the “Dark Phoenix” disaster — here are 2 major reasons why

Forky’s mission becomes a gag through much of the beginning of the movie as Bonnie and her parents go on vacation in their RV. Woody spends most of the trip trying to keep Forky from ending up in the trash until finally Forky has had enough and jumps out of the window of the moving RV. Woody follows and that’s where the movie becomes great again as Bo Peep (Annie Potts), who was thought to be a toy that was broken or donated as she didn’t appear in “Toy Story 3,” comes back into Woody’s life. 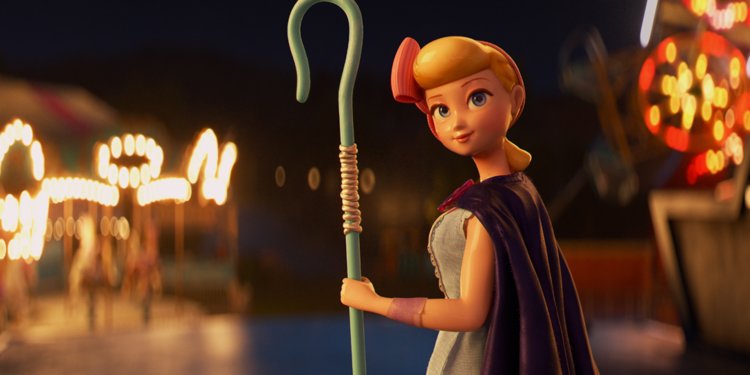 After not being in “Toy Story 3,” Bo Peep is back in “Toy Story 4” and she finally has some decent screen time.DisneyIn many ways, “Toy Story 4” highlights the two ways the franchise tells its stories. The first half of the movie has a structured feel similar to the previous feature films, while the second half has the sharp action-adventure feel of the22-minute TV specials andshorts that were produced after the release of “3.” Mixed together, the movie feels like more of an action-adventure tale than the previous movies, but with the same emotional tug that will make you go through a box of tissues while watching it.

And along with Forky, there are other new characters that are major scene stealers. Keanu Reeves voices Duke Caboom, the action figure of Canada’s greatest stuntman; Christina Hendricks plays Gabby Gabby, a doll in need of a new voice box; while Keegan-Michael Key and Jordan Peele play the plush toys Ducky (Key) and Bunny (Peele), who both share a hilariously dark imagination.

The “Toy Story” franchise has been on hiatus in the feature film space for close to a decade, but that shouldn’t affect its box office. “Finding Dory” was released 13 years after “Finding Nemo” and went on to make over $1 billion worldwide. Disney/Pixar should expect the same kind of performance from Woody and the gang.

And it’s much needed, as the summer box office is currently slumping with consecutive weekends when movies like “Godzilla: King of the Monsters” and “Dark Phoenix” underperformed at the domestic box office. It looks like that will continue this weekend with the release of “Men In Black: International,” which is sporting thelowest Rotten Tomatoes score of any “MIB” movie in the franchise with 30%.