“There was no proof of a conspiracy to help defeat Donald Trump,” Noah said. “But you know who doesn’t care about any of that? Donald Trump.” 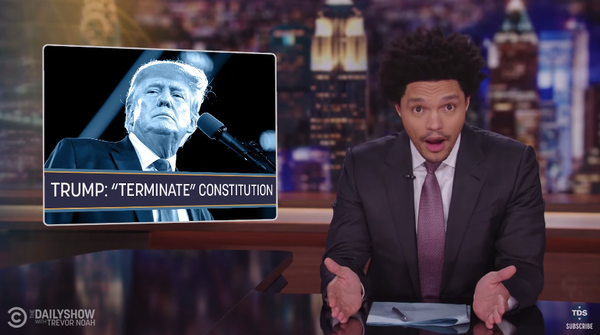 Welcome to Best of Late Night, a rundown of the previous night’s highlights that lets you sleep — and lets us get paid to watch comedy. Here are the 50 best movies on Netflix right now.

Over the weekend, Donald Trump floated the idea of terminating the Constitution. He was responding to a report about Twitter, specifically its decision, during the 2020 presidential campaign, to block links to an article about Hunter Biden’s laptop.

As Trevor Noah noted, some people expected the report — hyped in advance by Twitter’s new owner, Elon Musk — to show that Twitter had colluded with Democrats to repress the story. Instead, it seemed to show the Biden campaign asking Twitter to take down not-safe-for-work Hunter Biden photos. Still, Trump seemed to believe it proved “Massive Fraud” that justified the “termination” of parts of the Constitution, in order to reverse the election results.

“There was no proof of a conspiracy to help defeat Donald Trump,” Noah said. “But you know who doesn’t care about any of that? Donald Trump.”

“The Constitution is one of the documents he actually stole and took to Mar-a-Lago.” — JAMES CORDEN

“Former President Trump on Saturday said that the 2020 election should be overturned and the Constitution should be terminated. Well, I’ll say this for him, he does give a memorable wedding toast.” — SETH MEYERS

“Yeah, that’s right. The Republican front-runner for president of the United States wants to terminate the Constitution because Twitter wouldn’t allow him to see Hunter Biden’s [expletive].”— TREVOR NOAH

“Again with the Hunter Biden laptop! Give it a rest! You don’t hear anyone obsessing over the former president’s son’s laptop. And Eric’s got a good one — it’s made by Fisher-Price, and it can tell you what sound a cow makes.” — STEPHEN COLBERT

“So yeah, sorry, everyone, if you want to see naked people, you’ve got to go to every other website on the internet, I guess.” — TREVOR NOAH

“You know, not everyone is a stable enough genius to write down their intention to overthrow democracy in a social media post, but he thinks the Constitution is something that can be terminated, like it’s Meat Loaf on an episode of ‘Celebrity Apprentice.’ It doesn’t go like that.” — JIMMY KIMMEL

“It’s only fair. Trump got to win an election through Facebook, Biden should get to win one through Twitter.” — JAMES CORDEN

“Right now, Warnock is leading Walker in the polls by about four points. Yeah, only four points. That explains Warnock’s slogan, ‘Even if I win, I’m genuinely hurt.’” — JIMMY FALLON

“President Biden said on Friday that Democrats must win the Georgia Senate runoff to avoid a 50-50 split in the chamber. ‘But that would mean the end of my presidency!’ said Joe Manchin.” — SETH MEYERS

On Monday’s “Jimmy Kimmel Live,” Haley Lu Richardson shared the first text message she received from her co-star Aubrey Plaza before they started working together on “The White Lotus.”

What We’re Excited About on Tuesday Night

Jerrod Carmichael’s “Rothaniel” and Atsuko Okatsuka’s forthcoming HBO Max special “The Intruder” are among the best comedy of 2022.