Trump Doth Protest Too Much

On President Trump’s second day in Britain, protesters took to the streets for what they called a “Carnival of Resistance.”

“Well, good for you. That sounds fun. We have to live with him. Here, it’s a little less ‘Carnival of Resistance’ and more a traveling freak show.” — STEPHEN COLBERT

“Man, British protesters are no joke. Tens of thousands protesting Trump, and this was in the rain, which I know to them is a summer day, but that’s not the point.” — TREVOR NOAH

Trump held a news conference with Prime Minister Theresa May, at which he was asked about the thousands of people protesting his visit. Trump said the large crowds were mainly there to welcome him, and that reports to the contrary were “fake news.”

“Well, if there’s one thing Trump knows how to estimate, it’s a crowd size.” — JIMMY KIMMEL

Not a Good Look

The late-night hosts poked fun at the formal wear Trump wore to the state banquet at Buckingham Palace.

“I don’t think Trump touching the queen was offensive. What was offensive was Trump’s outfit for the big dinner.” — TREVOR NOAH

“How can a man have access to the nuclear codes but not a tailor?” — TREVOR NOAH

“I knew Robert Pattinson was picked to be the new Batman, but now I guess we also know who is going to play the Penguin.” — TREVOR NOAH

“Obviously, British protesters are taking to the street to make Trump feel unwelcome in the U.K., but for Trump, protests are like Eric — he just pretends they don’t exist.” — TREVOR NOAH

“The carnival featured the famous Trump baby blimp. Now I know that might seem unfair, but let me remind you, the blimp is anatomically correct.” — STEPHEN COLBERT

“So, as you can see, it was a real Trumps-giving Day Parade.” — JIMMY KIMMEL

“[imitating Trump] And when there are no protests, you know what I call that? Fake boos.” — STEPHEN COLBERT

Randall Park will chat with Noah about his starring role in Netflix’s new romantic comedy “Always Be My Maybe.” 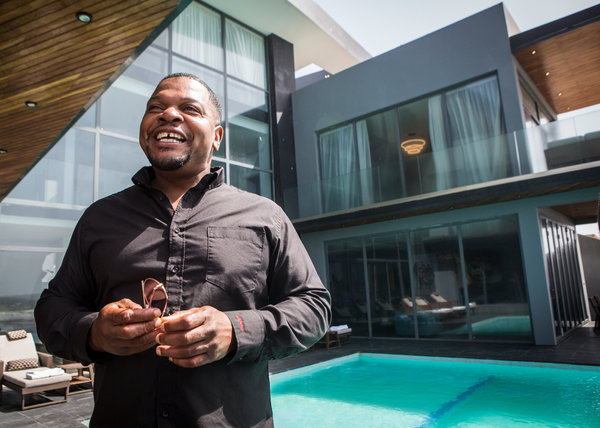 The artist Kehinde Wiley, known for painting the official portrait of Barack Obama, talked with The Times about his luxurious residency program in Senegal for visual artists, writers and filmmakers.