CHICAGO — One morning last month, still reeling from a weekend stuffed with international traveling on a private jet and a D.J. gig at Coachella, the fashion designer Virgil Abloh strode into the whirring basement workshop here at the Museum of Contemporary Art (MCA). A team of collaborators quickly surrounded him on all sides, each with a notebook or laptop, as he investigated a metallic clothing rack with equal-parts curiosity and skepticism.

“I’d say this is a good start,” Mr. Abloh, the artistic director of men’s wear for Louis Vuitton and creator of the popular streetwear label Off-White, said while surveying the custom-numbered and monogrammed prototype. It was an object he had workshopped with the museum group over months: Eight racks would display clothing he’d designed over his career, and thread together the narrative for “Virgil Abloh: Figures of Speech,” the 38-year-old designer’s retrospective, which opens on June 10. Long believing his talent lies not in creating something wildly original but in altering an existing item by roughly 3 percent to make it new, Mr. Abloh felt the clothing rack needed his personal touch.

“It’s adjusting the world to leave my signature, and it has to be exact,” he’ll tell me later, explaining his precise design strategy. For now, he’s spotted an item to complete the rack: a canary-yellow safety manual encased in a matching metal cage. Stripping it from the wall, Mr. Abloh — a trained architect, graphic designer and artisan — held the cage up to the rack and rubbed his faint beard as he assessed its worth for inclusion.

After a brief silence, Mr. Abloh nodded his head in apparent satisfaction. For the exhibition, the manual would register clothing on display: when it was made, its inspiration and context. “In that way it becomes like an archive,” he told the assembled group, which included several museum employees as well as the fabricator. “It’s not, like, something you’ll actually use. It’s just so you feel like there’s a record of everything on there.”

Lately, as he’s prepared for his exhibition, Mr. Abloh has been fixated not only on documenting his life and career but also assessing where, if at all, a self-described “nontraditional” artist like himself fits into the modern art-museum landscape. His Milan-based Off-White fashion label, during the fourth quarter of 2018, trailed only Gucci as the “hottest” fashion brand, according to the Lyst Index, which converts sales and “sentiment analysis” into rankings, but he still considers himself an art-world outsider.

He never expected the art world to validate his practice, and in many ways he still feels museums remain noninclusive and even hostile territory for new-age creators like himself, the sort who wear baby-blue screen-printed hoodies and orange Nike Dunks to meetings instead of black turtlenecks and small round glasses. And yet, Mr. Abloh will tell you, he’s long been concerned with legacy. Museums, for all his issues with whom they choose to exalt, still exist in his mind as “the vault to record what’s happened and to represent it for a lifetime.”

“I hope this work is revered and remembered,” Mr. Abloh recalled thinking back during his teenage years, when he first began maintaining the meticulous archive of his creations that he and Michael Darling, his MCA curator, have scoured for this exhibition. It’s a diverse and dense multidisciplinary collection that encompasses more than 15 years in the fields of fashion, music and all matters of design. Mr. Abloh said he senses that some in the art world might know him only from his recent work with Louis Vuitton but, specifically intent on showcasing an artistic throughline to his content — namely the dissonance between what an item is traditionally labeled and the infinite possibilities of what it could be — Mr. Abloh was intent on stuffing as much as possible into this show. 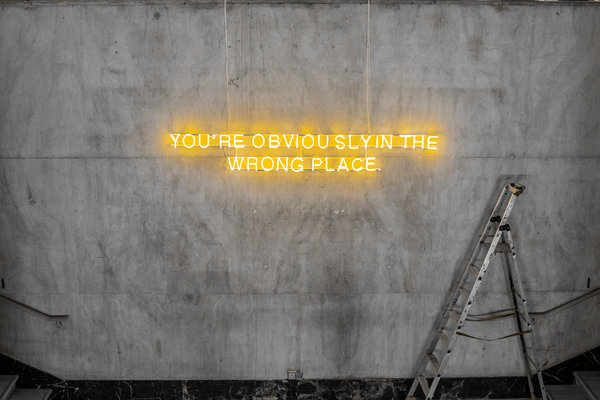 “I need this to jell together the kid that knows every Tumblr post that I ever made to someone who doesn’t even know of Off-White but just knows my name keeps popping up,” Mr. Abloh said. He will repeatedly tell you that there’s an “air of impossibility” to his journey from Rockford, Ill., skate punk to architecture student; from fashion-world self-starter and associate of the rapper Kanye West to the first African-American man appointed to head a French luxury fashion house.

Like its creator, the show is varied in its artistic disciplines: There’s jewelry and chairs and luggage and dresses and turntables and a five-foot plexiglass recreation of the rapper’s 2013 “Yeezus” album cover that Mr. Abloh designed while serving as Mr. West’s creative director. If it’s all a bit overwhelming, well, there’s a low-set skateboarding ramp in the galleries that doubles as a bench.

Over the past three years, as Mr. Abloh prepared for the exhibition, he’s come to see his formal recognition by a museum as a positive moment, not just for a self-described “commercial designer” who has collaborated with Ikea and Evian water, but for art museums on the whole — a mark of their cultural progress.

“It’s a sign that the system was out of date,” Mr. Abloh said one evening at Soho House Chicago, the members’ club. His archetypical fan and buyer is often derided as a “hypebeast,” a stereotype of a street-wear-obsessed millennial male with disposable income. Mr. Abloh views this person not as a burden on his artistic credibility but rather an opportunity: If they visit the MCA for the first time to view his exhibition, that’s a win for his generation. “It shows that the kids knew better than the establishment,” he said.

For the exhibition’s duration, a black flag emblazoned with the words “Question Everything?” will stand in the plaza. A working definition of “streetwear” prominently features in the opening section of gallery and together they drive home Mr. Abloh’s belief that his exhibition is itself a form of infiltration. For too long, he added, “there was this lost connection between the museum as a cultural institution supposedly representing what’s happening now versus presenting retrospectives of things that have been celebrated a million times over.”

The section of the exhibition Mr. Abloh is most excited about is entitled “The Black Gaze.” It showcases his works that, while never explicitly described as such, he now says center on race: billowy black ballerina-inspired dresses he made with Nike for the tennis star Serena Williams as part of his “Queen” collection; Louis Vuitton campaign photographs featuring African children; a neon sign from a 2016 Off-White runway show reading “You’re obviously in the wrong place.” (It’s a line Beverly Hills’ saleswomen used when Julia Roberts enters their store, in her stripper boots, in “Pretty Woman.”)

Samir Bental, director of AMO, a research studio set up by the architect Rem Koolhaas, has been helping Mr. Abloh design the exhibition and suggested this section. “I thought it would be interesting to show this political side of him a bit more boldly than having it be more subconscious or hidden,” Mr. Bental said.

When Mr. Darling reached out to Mr. Abloh in 2016 with the idea for an exhibition, the designer’s name was foreign to many outside fashion circles. “And so it really took us a while to get other museums on board to take the show,” Mr. Darling recalled. (“Figures of Speech” will travel later this year to the High Museum of Art in Atlanta, the ICA Boston and Brooklyn Museum in 2020).

Mr. Darling’s sweet spot is exhibiting artists who are, he says, “a bit misunderstood,” including the Japanese artist Takashi Murakami, who showed at the MCA in 2017. He recalls how some art critics griped when the MCA brought the exhibition, “David Bowie Is,” from the Victoria & Albert Museum in 2015. Mr. Darling said he expects similar pushback from “art snobs” to Mr. Abloh’s exhibition.

“There are going to be people that turn up their noses at it,” the curator said. “But that’s an exciting thing for me: to prove them wrong and show them how serious and how worthy he is of this.”

Mr. Darling referred to Mr. Abloh as an eager, hands-on student. Those who’ve collaborated with Mr. Abloh are aware that he’s sometimes leaning on them but they hardly mind.

“Virgil is the type of creator who would devour everything around him and turn it into his nourishment,” Mr. Murakami wrote in an email. He first met Mr. Abloh when the Japanese artist designed Mr. West’s 2007 album “Graduation,” and collaborated with the designer for last year’s joint exhibition, “America Too,” at Gagosian’s Beverly Hills gallery.

Jarrett Reynolds, the senior design director at Nike, who has worked with Mr. Abloh for four years, said that there’s a transactional quality to the teamwork. “We know our strong point is utility and performance whereas Virgil’s superpower is his connection to culture, insight, aesthetic,” Mr. Reynolds said.

Bess Williamson, a professor of art history, theory and criticism at the School of the Art Institute of Chicago, said Mr. Abloh’s showing at the MCA is not so much a risk as an evenhanded credibility exchange between artist and venue.

“I would fit this into the idea of co-branding,” she offered. Mr. Abloh receives the art world’s stamp of approval; the MCA gets a “cool” bump. Of course, there’s also much money to be made: a custom Virgil Abloh store with exclusive merchandise will live in the MCA over the course of the exhibit. And a pop-up Nike store curated and designed by Mr. Abloh is set to open on nearby Michigan Avenue.

Ms. Williamson noted the inherent paradox of a museum showcasing a designer affiliated with a luxury brand like Louis Vuitton. “There’s a sense of democratizing the museum by having popular work — fashion, music, things that are more inviting and less intimidating for a broader audience — but at the same time it’s the most elite version of that,” she said.

One morning last month, perched on a park bench near the museum, and steps from his idling Mercedes G-Wagon, Mr. Abloh admitted that he’s been reassessing where his narrative intersects with that of contemporary art.

“For so long I didn’t see artists or designers that looked like me in spheres of high art or high fashion so I believed I couldn’t do that,” he said. “But now, in this moment, in a way, I’ve become part of the establishment.” 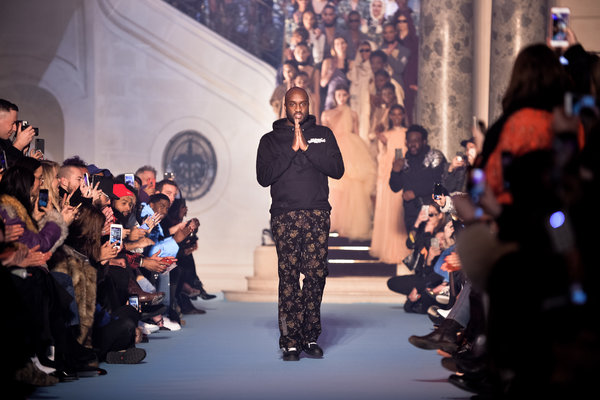 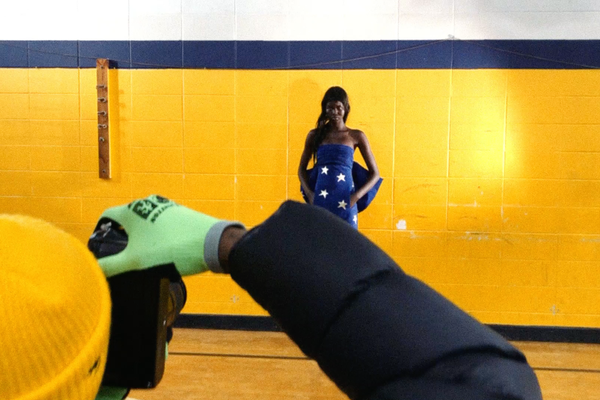 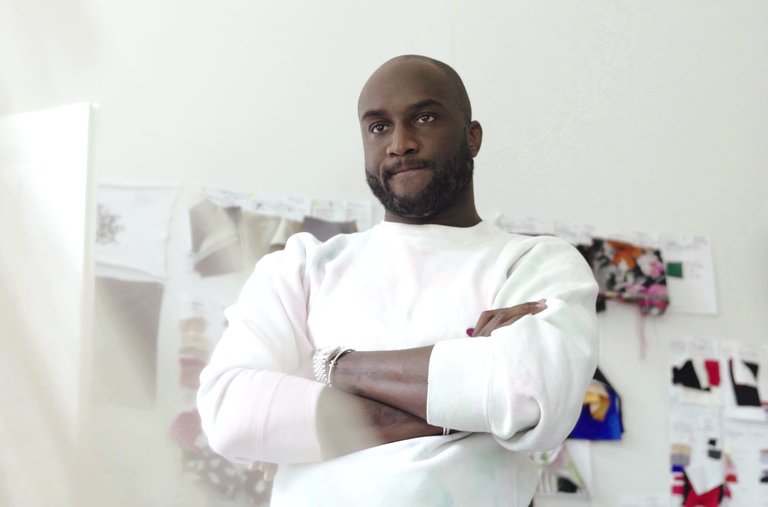