For nearly a year, Jake Halpern followed a family of Syrian refugees who arrived in the United States on Election Day of 2016 as they navigated the first day of school, learned English — and received a death threat.

But after wrapping up his Pulitzer Prize-winning graphic narrative series, Halpern realized he was only scratching the surface of a more compelling story. “I spent more time with the son, Naji, and realized he’d played a much more important role than I appreciated,” Halpern said. “He was really the driving force who pestered his dad to come to America.”

The 20-part New York Times series, a collaboration between Halpern and the illustrator Michael Sloan that won the 2018 Pulitzer Prize for Editorial Cartooning, was told largely from the parents’ perspective. But a new graphic novel, “Welcome to the New World,” which will be published Tuesday, follows the family through last fall and explores Naji and his sister Ammal’s points of view. “There’s this growing gulf between the kids and their parents,” Halpern said. “They have a shot at the American dream that their parents don’t.”

The excerpt below explores the divergent experiences that their father, Ibrahim, has from his children, as he and his brother, Issa, struggle with finding their footing — and jobs. “It shows the very real, and often underpublicized, pressure that refugees are under to become self-sufficient in a new land,” Halpern said. 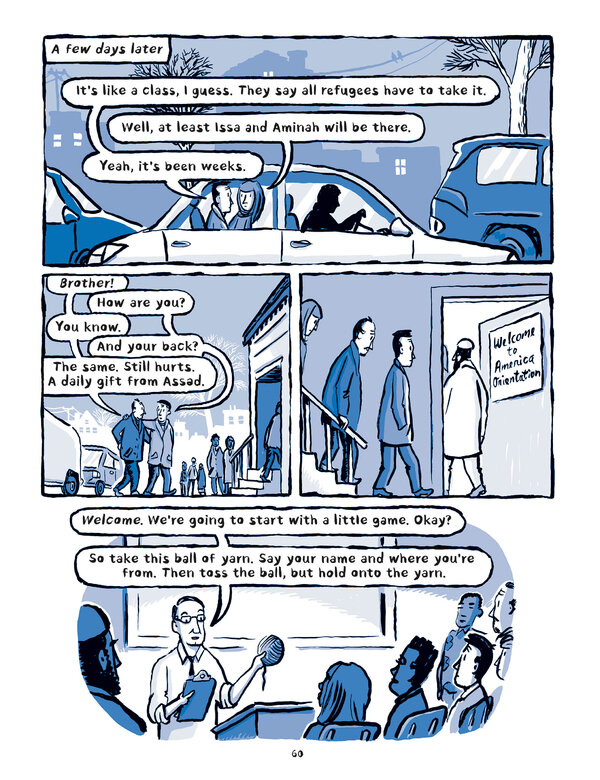