Western museums were built on a colonial foundation. One of the ways they reflect this is by presenting objects from certain cultures — African and Native American, among others — as the ethnographic remains of long-lost societies, rather than representative of living traditions. The Newark Museum began trying to break the mold in 2016 when it reconceived its Native American galleries. Now, the institution has taken another overdue step by mounting its first solo exhibition dedicated to a Native artist: a fantastic midcareer survey for Wendy Red Star.

Containing roughly 40 artworks, “Wendy Red Star: A Scratch on the Earth” is an impressively tight and consistent show. The artist, who is a member of the Apsáalooke (Crow) Nation and grew up on its reservation in southern Montana, works in a variety of media — including photography, textiles and installation — and draws on both conceptual art and craft strategies. At the heart of her practice, however, is an abiding interest in the dichotomy of representation and self-representation. More than the conflict between the two, she seems drawn to the creativity that can be sparked in the space that separates them.

You can watch that process unfold in one of the most engrossing works in the exhibition: “Um-basax-bilua, ‘Where They Make the Noise’ 1904-2016” (2019), a timeline of photographs from Crow Fair, a large annual festival and gathering that features daily parades. The images — which show Crow men and women in tribal regalia and riding on horses, floats and trucks — are themselves small, but they accumulate in a roughly 130-foot-long installation that wraps around the walls of the central gallery. 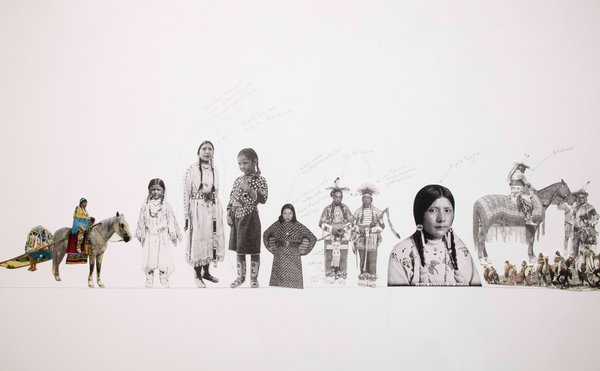 The piece begins with historical photographs that Ms. Red Star found in her research. Most were not taken by tribal members, but instead depict the Crow people through a white lens, reflecting the United States government’s mistreatment of Native Americans and the history of Crow Fair itself: It was dreamed up by a federal “Indian agent” in 1904 to aid with assimilation. Moving into the mid-20th century, the logos of photo agencies appear. Soon after, vehicles arrive at the festival, along with color photography. Starting in the 1980s, Ms. Red Star enters the scene, first as a child, then as a smiling teenager, and finally as an adult, snapping smartphone selfies with her daughter.

This by itself would be a powerful portrait of how the Crow Nation has maintained its traditions within an event originally meant to repress them. But what give “Um-basax-bilua” an additional layer of meaning are Ms. Red Star’s annotations in pencil all along the timeline. Using handwritten notes and arrows, she points out Crow accouterments and hairstyles, explains the origins of customs and names various figures, whether a tribal chief or her aunt. The tone is both educational (“This is an elk tooth dress”) and confessional (“The most awkward teenage photo … ”), as if we were reading her private research notes. Ms. Red Star turns public history into a personal project, which she then returns to public view. In the process she drives home the timeless lesson that matters of government policy are also matters of people’s lives.

Wendy Red Star: A Scratch on the Earth 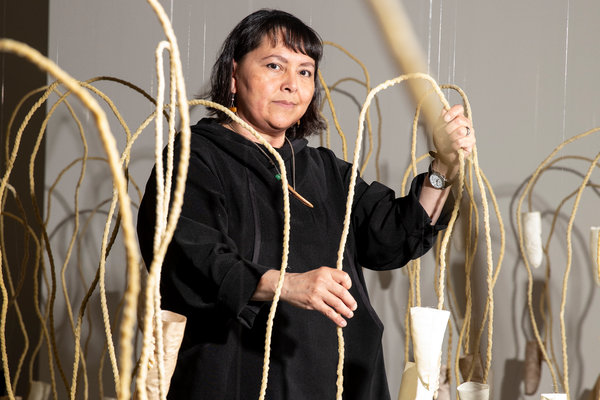