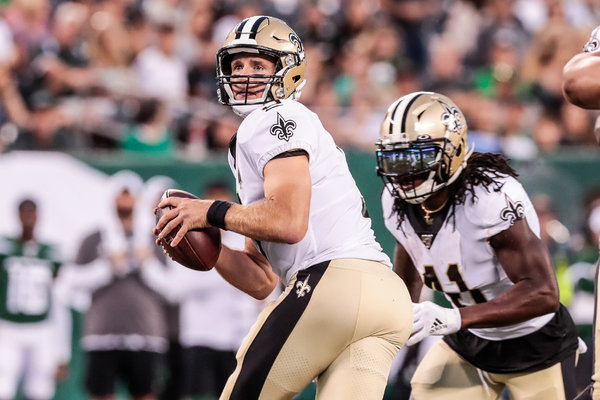 HOUSTON TEXANS VS. NEW ORLEANS SAINTS 7:15 p.m. on ESPN. Monday Night Football celebrates the beginning of its 50th anniversary season with this interconference clash in New Orleans. After a tough overtime loss to the Los Angeles Rams in the N.F.C. Championship Game last season, the Saints will look to rebound quickly. n recent seasons the Saints have struggled in openers, winning their last in 2013. But with the quarterback Drew Brees, who surpassed Peyton Manning as the all time leading passer in N.F.L. history last season, at the helm, New Orleans fans may enter the game feeling confident.

GRIT 10 p.m. on PBS (check local listings). In 2006 a “mud volcano” erupted in East Java, Indonesia, engulfing more than 10 villages in slimy sediment. And it hasn’t stopped since. This documentary by Cynthia Wade and Sasha Friedlander chronicles the fight to end the flow, clean up the area and hold the drilling company that has been accused of causing the eruption accountable. It focuses on Dian, who was just 6 years old when the initial disaster occurred, as she develops an interest in politics and begins to take on a leadership position in her community.

KICKING AND SCREAMING (1995) Stream on Hulu; Rent on Amazon, Google Play, iTunes, Vudu and YouTube. Noah Baumbach’s debut film about a group of hyper-articulate recent college graduates who can’t seem to leave student life behind is often held up as a classic celebration of Generation X cynicism and aimlessness. But it is Baumbach’s ability to make his characters “emotionally engaging,” which Janet Maslin identified in her review of the film for The Times, that elevates the movie. Several of his recent films, including “Frances Ha” (2012) and “Mistress America” (2015), demonstrate that he remains sensitive to the existential quandaries faced by the young and meandering but “Kicking and Screaming,” made when Baumbach was only a little older than his characters, shows the roots of his interest in what Maslin called being “smart, promising and temporarily adrift.”