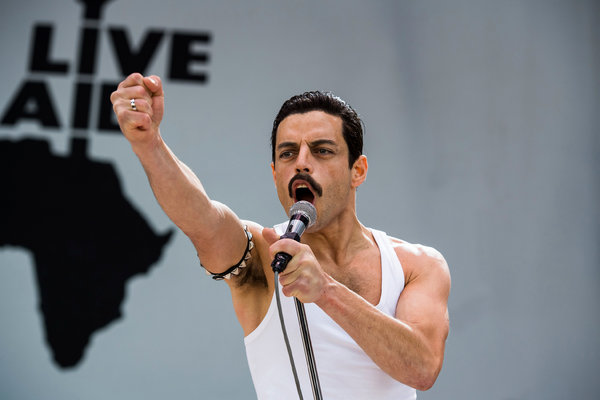 BOHEMIAN RHAPSODY (2018) Stream on HBO platforms. Few songs are as evocative of an American summer as those of Queen, whether you’re stomping along to “We Will Rock You” at a baseball game or belting out “Don’t Stop Me Now” at a backyard barbecue. Sure, Freddie Mercury and his bandmates were from England, but Queen’s music continues to reverberate across American culture, a phenomenon this Academy Award-winning biopic explores. Rami Malek (wearing a convincing set of prosthetic teeth) plays the Queen frontman in the film, which charts the band’s dazzling rise and experimental songwriting, alongside some of Mercury’s personal struggles. Although Malek’s performance earned him an Oscar for best actor, the New York Times critic A.O. Scott wrote that the film doesn’t do enough to capture “the glorious and unlikely artifice of Queen itself, a band whose scrambling of sexual and musical codes remains a remarkable phenomenon in the history of popular culture.”

FORREST GUMP (1994) Rent on Amazon, YouTube, Google Play, Vudu and iTunes. Saturday marks 25 years since moviegoers first saw Tom Hanks sprint across the screen as Forrest Gump, a tenderhearted Alabama man who pops up across some of the most important historical moments of the 20th century. Heralded for its seamless use of special effects and archival footage, the film follows Forrest from childhood — he is raised by his mother (Sally Field) and bullied relentlessly — until a talent for running makes him a football star. He goes on to fight in Vietnam, helps to expose the Watergate scandal, works on a shrimping boat and becomes an early investor in Apple, all while chasing after his childhood crush, Jenny (Robin Wright). The film won six Academy Awards, including best picture, and remains a classic cultural touchstone about America’s complicated history.

ENCHANTED KINGDOM (2014) 9 p.m. on BBC America. Whether he’s acting in “The Wire,” “Luther” or “The Office,” or performing as a D.J. at some of the world’s largest music festivals, Idris Elba can command an audience. But in this immersive documentary, the sweeping visuals take center stage, and Elba simply lends his voice as a narrative guide. “Enchanted Kingdom” takes viewers across Africa, examining plant and animal life in some of the continent’s harshest and most complex environments. Like “Planet Earth,” the film features state-of-the-art camera techniques that capture close encounters with nature, from active volcanoes to the depths of the ocean.

LAVELL CRAWFORD: NEW LOOK SAME FUNNY! 10:35 p.m. on Showtime. You might recognize Lavell Crawford from “Breaking Bad,” where he played Saul Goodman’s bodyguard, Huell Babineaux, or from his stint on “It’s Always Sunny in Philadelphia” as Landslide, a catchphrase-loving comic. But Crawford has been performing stand-up for years, first on “ComicView” on BET in the 1990s, and later as a contestant on “Last Comic Standing” on NBC. In his latest comedy special, he touches on his recent 120-pound weight loss, former President Barack Obama’s first term and his view of the police in 2019.