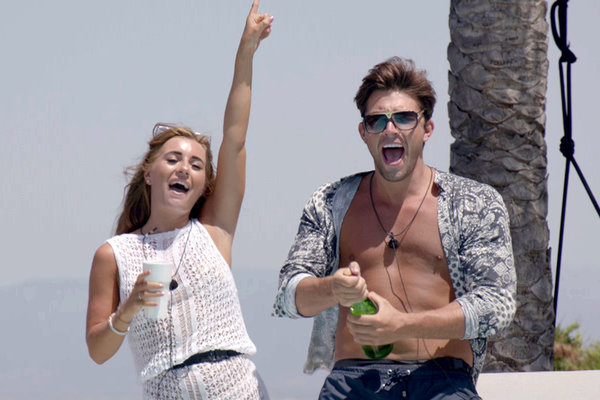 LOVE ISLAND Stream on Hulu. This British reality show, which first aired in 2015, has grown into a cultural phenomenon. The premise is simple: A group of 20-something singles enters a villa in Majorca, where they couple up. Every few weeks, new singles enter the home and the couples can reshuffle, while the audience at home weighs in on who stays and who should go. With its rabid fan following, the show has inspired heated debates on the internet, in the media and even in the British House of Lords on mental health, broadcasting rules and emotional abuse. The first four seasons are available on Hulu, with episodes of Season 5 rolling out on Saturday.

POINT BREAK (1991) Stream on Hulu; Rent on YouTube, Vudu, Amazon, Google Play and iTunes. This ‘90s testosterone-fueled thriller, directed by Katheryn Bigelow, has it all: surfing bank robbers, skydiving, Gary Busey and the internet’s latest crush, Keanu Reeves. Reeves plays Johnny Utah, an F.B.I. agent who embeds with a gang of surfers that may be involved in a string of robberies. Utah soon finds himself in a cat-and-mouse game with the group’s leader, Bodhi (Patrick Swayze). In her review for The New York Times, Janet Maslin wrote, “Just as she did in ‘Blue Steel,’ the director Kathryn Bigelow observes the peculiar complicity that develops between a law officer and a seductive criminal.”

THE OLD MAN & THE GUN (2018) Stream on HBO platforms; Rent on Amazon, YouTube and Google Play. Not all films about bank robbers are high-octane thrill rides. In “The Old Man & Gun,” based on true events, Robert Redford plays Forrest Tucker, a career criminal who spent most of his life, into his late 70s, getting locked up for robbing banks and breaking out of prison. The film, directed by David Lowery, examines Tucker’s mysterious motives as he moves into the final phase of his life. Along the way, Tucker connects with old compatriots, played by Danny Glover and Tom Waits, meets a love interest, played by Sissy Spacek, and evades the cops, led by the dogged detective John Hunt (Casey Affleck). Praising Mr. Redford’s performance in his review, A.O. Scott wrote in The Times, “At a time when bluster, bragging and histrionic displays of self-pity are apparently the defining characteristics of American manhood, it’s nice to be reminded of the virtues of discretion and quiet.”

BIG3 BASKETBALL 8 p.m. on CBS and CBS Sports Network. The N.B.A. season may be over, but basketball fans can still catch games from the fledgling three-on-three league, Big3. Founded by the rapper Ice Cube and Jeff Kwatinetz, the league reunites former N.B.A. players like Greg Oden, Lamar Odom, Amar’e Stoudemire and Metta World Peace across its 12 traveling teams. Big3’s third season kicks off in Detroit at Little Caesars Arena, with Trilogy taking on the 3-Headed Monsters, Power facing off against 3’s Company and the Enemies playing Bivouac.