When any new family steps into the White House, there are, of course, lots of changes to be made. The decor will suit the administration’s design tastes, the occupants will have specific food requests, and there are obvious political differences. But a new article in The New Yorker is pointing out a key change between Donald Trump and Joe Biden’s demeanor when it comes to working with the staff. 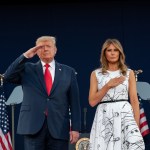 
Melania & Donald Trump Got the COVID-19 Vaccine in Secret, Unlike President Biden

Most of the employees at the White House work through multiple administrations — party affiliations rarely matter in this situation — and they are honored to serve any president. Yet there’s already a notable difference between the two families, and the residence staff is speaking up about how they were treated by Donald and Melania Trump and what it’s like now with Joe and Dr. Jill Biden. As one staff member told The New Yorker, “It’s like night and day.”

For starters, the Bidens broke unofficial protocol — in a good way — by greeting the staff in the White House right away in order to make sure they started off on the right foot. “The Bidens came in and the first thing they did was make a loop of the State Floor and greet the staff,” the same employee explained while crying. “We were all very flattered. Usually, we meet them in the first days or first weeks, but never in the first minutes.” The Bidens warmly greeted them while still maintaining COVID-19 protocols, which became a sticking point in the Trump administration; workers reportedly were often stressed out about the lack of concern for their well-being.

One employee named Jason talked about the chaos created with no clear plan in place — White House staff was getting sick with the virus and the ones who had recovered had to put in additional hours to cover for those out sick. “There was lots and lots of confusion, no direction from the top, a complete lack of empathy, sympathy,” he said. “The Christmas parties with maskless hordes were catered, but [the staff] would have to be there for this and that. Someone’s got to be there, not everyone can leave while the catering crew comes in. There was not a steady message on how to keep you safe.”

There’s been some relief now that President Biden has mandated a mask policy on federal property and the vaccine rollout is happening faster than anticipated. For the White House staffers, it’s a sigh of relief because political beliefs under the Trump administration, which are supposed to be checked at the door when working as a White House residence staff member, became a heated topic of discussion.

Many of the workers feel like they survived the last four years, but are feeling able to breathe with a new family in the White House. Yet they do know there one task at hand — to honor the White House, no matter who is leading. Jason summed up, “It speaks to their diligence and loyalty to the house itself — they are not really there for the person.”