“Younger” has always been escapism at its fantastical best: A New York of dazzling Manhattan skyscrapers and tastefully grungy Brooklyn lofts. A 40-ish divorced woman battling workplace ageism by passing as a 20-something, with enticing romantic possibilities in each age group. A publishing industry where even an assistant can afford designer threads she doesn’t need to wear twice.

Or, as it turns out, color-coordinate with a mask while socially distancing from her equally glamorous colleagues. Because when “Younger” returns Thursday for its seventh and final season, it will be as if the pandemic never happened. (In a move that will likely vex at least some longtime fans, the new season will run first on the Paramount+ streaming service and then air on TV Land, its original home, later this year.)

True to form, “Younger” left hearts dangling in September 2019 when, in the Season 6 finale, Charles (Peter Hermann) finally asked Liza (Sutton Foster) to marry him — and the episode ended before she could answer.

But just as the series was to begin shooting last spring, bringing closure to that stomach-knotting will-she-won’t-she moment, the Covid lockdown shuttered the television industry, delaying the season’s premiere by roughly 10 months. And Darren Star, the show’s creator, and his writers found themselves with a cliffhanger not of their own making: Would they or wouldn’t they incorporate the pandemic into the show’s farewell season?

Several episodes had already been written by September when Star said in interviews that he was considering ways to integrate it into the series as the season progressed.

“We did think about it,” he said recently by phone. “But we would have had to create a big time-jump, which felt artificial and contrived. Even if we had done it, I think there were some drawbacks sitting there last summer and imagining how things would play out a year from now. You don’t want to guess wrong about how these characters are behaving.” 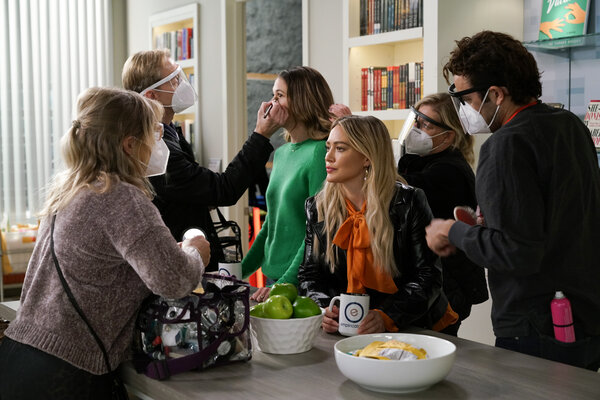 Ultimately, they voted to leave the pandemic out.

“I think we all felt like everyone’s sick of it,” said Dottie Dartland Zicklin, a writer and executive producer. “They don’t want to see it.”

Foster, for one, was happy to keep “Younger” in its bubble. “‘Younger’ is always taking whatever is happening in the world or the zeitgeist, and then we flip it,” she said. “But ‘Younger’ is also this wonderful escape, and there’s nothing funny about the pandemic. It’s horrific and heartbreaking and half a million people have died, and what do you do with that on the show?”

Meanwhile, another spirited discussion was transpiring in the writers’ room around how to wrap up Liza’s story seven seasons in. Would she get the man? And if so, would it be Charles, the age-appropriate head of Millennial, the publishing house where Liza works? Or Josh (Nico Tortorella), the much younger Williamsburg tattoo artist? Would her career at Millennial continue to soar, or would it land with a thud?

Zicklin, who is closer to Liza’s age and had struggled with career and family herself, felt that she could speak directly to the Gen X experience. Other female writers were more philosophically in tune with the millennial Kelsey (Hilary Duff), Liza’s colleague and friend.

“I love hearing their perspective because I think the show, thematically, is generational,” Zicklin said. Discussions about the two main aspects of Liza’s story — love and career — highlighted that divide, starting with the topic of marriage.

The concept of female success, too, is different in 2021 from what it was in the ’90s, when Zicklin tended to give her professional women characters tight hair buns, power suits and miserable lives alone at home with cats.

“In this show, both Liza and Kelsey are very focused on their career, and they don’t come out like pinched spinster schoolmarms,” she said. “They’re well-rounded women who a career is an important part of their life, just like it would be for any male character.”

The land of “Younger” may have been pandemic-free, but there were health restrictions, mandatory testing and the occasional shutdown to contend with when shooting began in October. Ultimately Miriam Shor, who stars as Diana, Millennial’s imperious head of marketing, and Charles Michael Davis, who plays Zane, Kelsey’s competitive editor-beau, were unable to resume their regular roles because of scheduling and Covid-related issues; they will appear only in cameos. As a result, “we had to re-engineer a lot of the story,” Star said.

There was also the issue of working around Duff’s expanding baby bump. “Hilary is amazing,” Star said. “She came to New York pregnant from L.A. and worked her tail off under these circumstances. And she did it with such a smile on her face, up until the point where literally I thought she was about to pop on the set.”

Star acknowledged that there have been discussions about a “Younger” spinoff starring Duff, which were reported last year. “It’s something we’re talking about, and I’d love to see it happen,” he said. “I would want it to be its own discrete show and not feel like it’s just the next season of ‘Younger.’”

Duff, who gave birth in March, did not respond to a query about the spinoff. As for the new season of “Younger,” “Kelsey made some bold choices this year,” she wrote in an email. “She’s a little wobbly on her feet sometimes, but as long as she continues to work hard and not take no for an answer, I know she’ll succeed.”

Because everyone on set was masked, the actors went long stretches without seeing the expressions of crew members or even one another — leading to some rather surprising advantages.

“You rehearse with masks on, and then when you’re shooting is the first time that you actually are able to respond fully to what another actor is doing,” Hermann said. “And there’s a beauty to that, a freshness to that.”

Star credited movie magic with the transformation of a wounded New York back into the show’s enchanting version. “We shot in locations all over the city,” he said.

“Some were more difficult — a lot of locations, we’d secure them and then they’d disappear because of Covid restrictions,” he added. “So we were constantly juggling, and to avoid people with masks on the street, we filled our frame with our extras.”

For Foster, the pandemic permeated the production in small but poignant ways. “There was something amazing about being able to connect with people, even to hug someone or just be in a room and sitting at a table,” Foster said. “It’s those simple things that we took for granted.”

Toward the end of the season, Hermann pitched Star a way to subtly acknowledge what was happening in the outside world. In the final episode, Charles shows Liza a treasured vintage typewriter as the camera focuses on its brand: Corona.

“In a sense, the pandemic does live in our show because it plays in New York, and the city just looks spectacular in the way that the show shoots it,” Hermann said. “But I think that in this case, the city has never been more beautiful. There is this stately resilience and this fierce, determined elegance and then just this badass grit.”

The final hurdle in the writers’ room was how to deal with Liza’s lie, which began as a rather comedic way for her to get hired in an ageist industry but then snowballed into something more serious.

“Her lie does have a cost,” Foster said, leaving it at that.

It also had more staying power than even the show’s creator had anticipated.

“I had always imagined that Liza’s lie would cease to be the central premise of the series were it to continue past a certain number of seasons,” Star said. “But it actually sustained itself a lot longer than I expected, and really it’s because we let the characters dictate where the story goes.”

The lie is important, Zicklin said, and it goes beyond Liza’s simply shaving a few years off her age. “When you fundamentally lie to somebody, you erase your past, and that’s a big thing,” she said. “It’s really interesting if you think about those two characters, Josh and Charles, and how they handle that.”

And that became yet another generational conversation about whether integrity was better defined by Charles’s rather moralistic, old-school attitude or by Josh’s more accepting stance that people do what they have to do.

Hermann and Foster shot their final scene together on Feb. 26, wrapping at 5 a.m. outside the Bowery Ballroom on the Lower East Side. “It was just the two of us, and we looked around on the sidewalk, and there were our writers and our crew and our director, with the garbage trucks rumbling by,” Hermann said. “We were so happy and so sad and so deeply grateful.”

Written by Star, the series finale “is just very elegant and heartbreaking and hopeful and joyous and optimistic,” Hermann added. “And it’s a hard-won optimism, which is also embodied in Sutton. I think that her spirit and her determined, positive outlook on life really, really got us through.”

After years of speculation about whether Liza would get her fairy-tale ending — and about what that might be, exactly — did the show land on the one Foster would have written herself?