If we’re really being honest with ourselves, one of the holiday traditions we look forward to the most is decorating the tree. There’s just something about staring at a Douglas fir decked out in bits, baubles, tinsel and lights that fills you with Christmas spirit. And while we’re suckers for the occasional nostalgic decoration, we’d be lying if we said we weren’t into some of the more current holiday décor available for our tree-decking whims.

That obviously includes tree ornaments — the most fun of which are undoubtedly those that are riffs on pop culture. Whether you go all-in with a theme or you just sneak in clever nods to your favorite TV shows and movies throughout your branches, you really can’t beat having little hanging tributes to pop culture all over your evergreen.

There certainly hasn’t been any shortage of moments, music, cinema and more in 2019 to inspire this year’s newest crop of trendy ornaments. The Game of Thrones finale, baby Yoda, Keanu Reeves’ renaissance, a bitchin’ season of Stranger Things, the return of Elsa and Anna, baby Yoda, Fleabag, Forky, Mr. Rogers… did we mention baby Yoda?

‘Tis the season to be jolly, and that’s precisely how the following pop-culture ornaments (from this year and year’s past) make us feel. 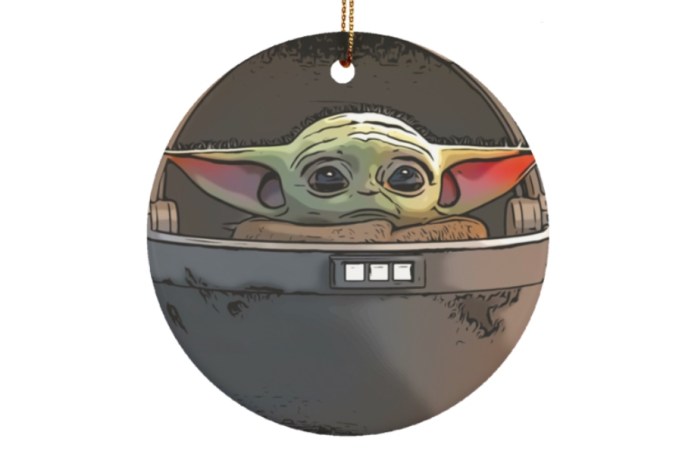 The force is definitely strong with this Mandalorian-inspired ornament. 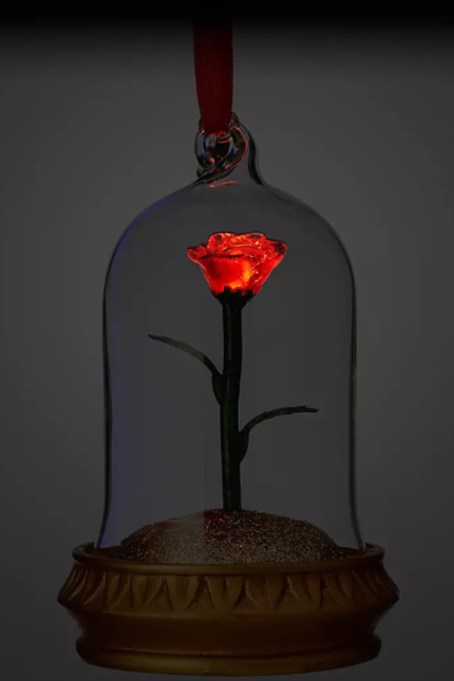 This rose from Beauty & the Beast doesn’t come with a dark curse, and it’ll light up your tree even more. Fairytales really do come true! 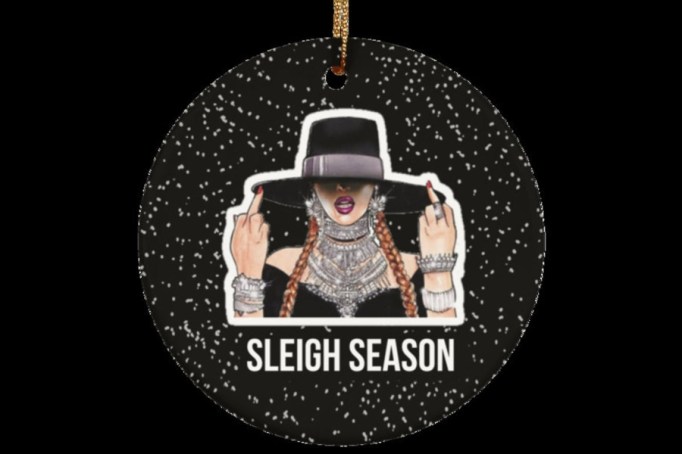 In a year that saw Queen Bey drop Homecoming, we couldn’t not include Her Royal Hiveness. After all, it’s sleigh season… and you know she sleighs all day. 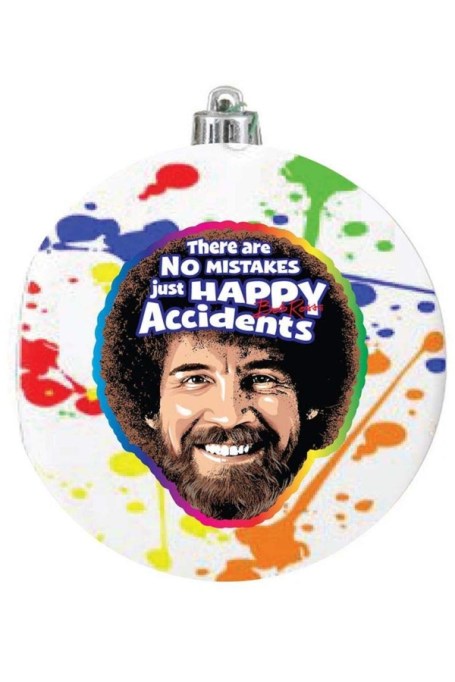 An entire new generation has discovered the hippy, trippy, super-chill artistic genius that is Bob Ross. So, this one’s for you, kids. 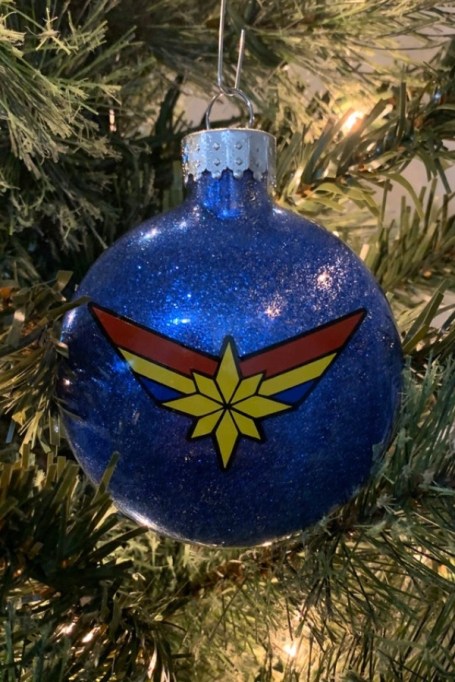 Brie Larson smashed the box office this year with her turn as superhero Captain Marvel, meaning she deserves a nod this holiday season. 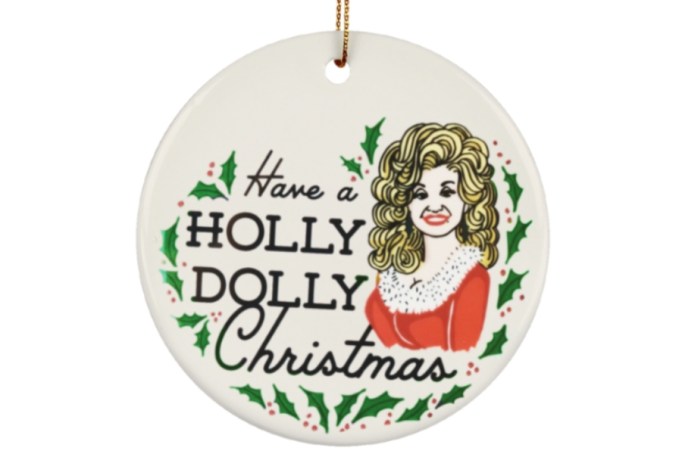 Who doesn’t love Dolly Parton? Her presence is even bigger than her hair this year, and we couldn’t ask for more. 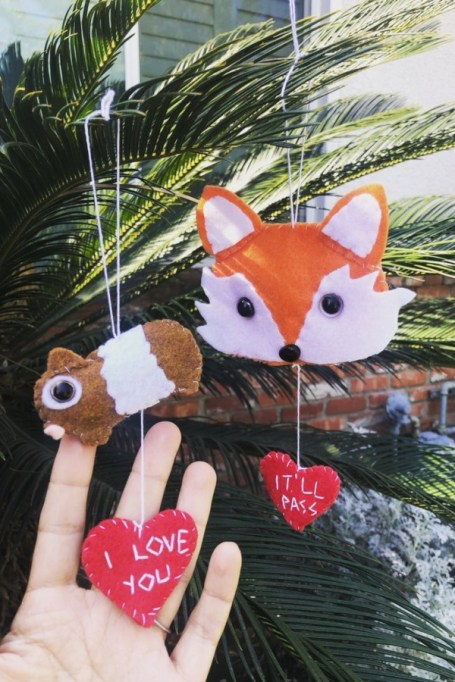 If you’re as obsessed with Phoebe Waller-Bridge as we are (and you should be!), these handmade Fleabag-inspired ornaments will warm your heart. And, sure, kind of break it too. 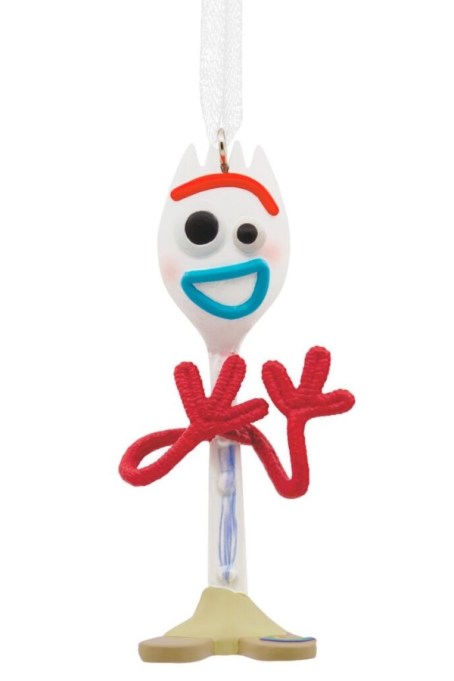 As surprising as it was, the star standout of Toy Story 4 ended up being a humble spork. For good reason, since it’s impossible not to smile when you see Forky. 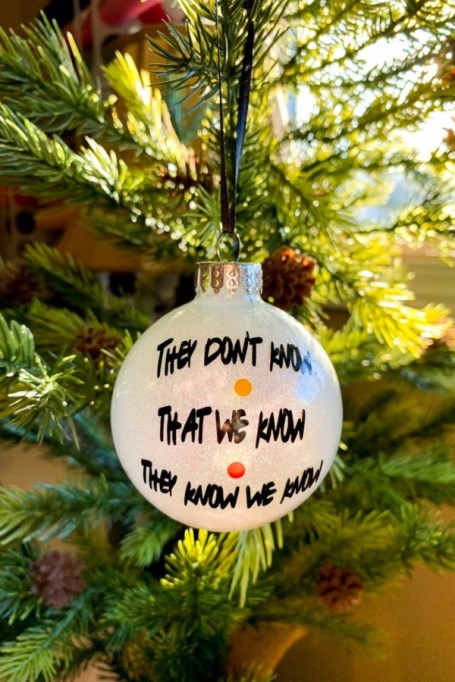 We like to call this “the one where we decorated with quotes from Monica, Chandler, and the rest of the Friends gang.” Plus, it’s a set of four. Could we BE any more excited? 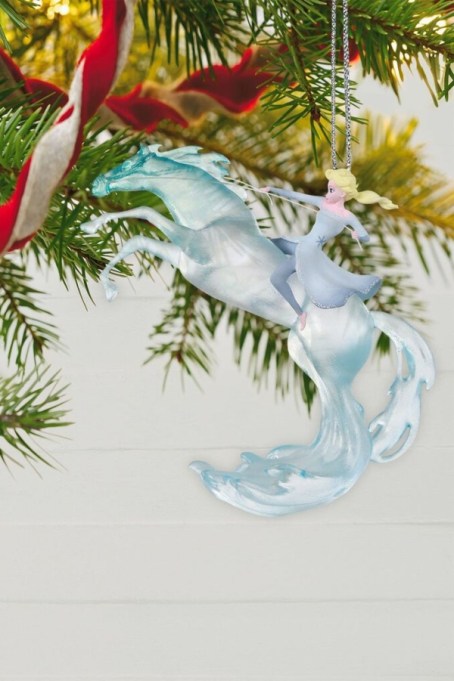 ICYMI, Frozen 2 is basically a global phenomenon. This ornament captures one of the best new additions introduced in the sequel: Nokk, the mysical water element that takes the shape of a horse. 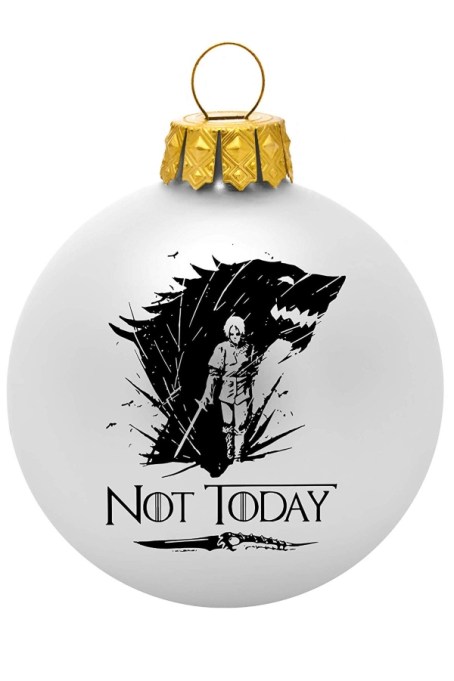 It goes without saying that we were all devastated to say goodbye to Game of Thrones. But the fact that Arya was such a badass in the final season deinitely cushioned the blow. 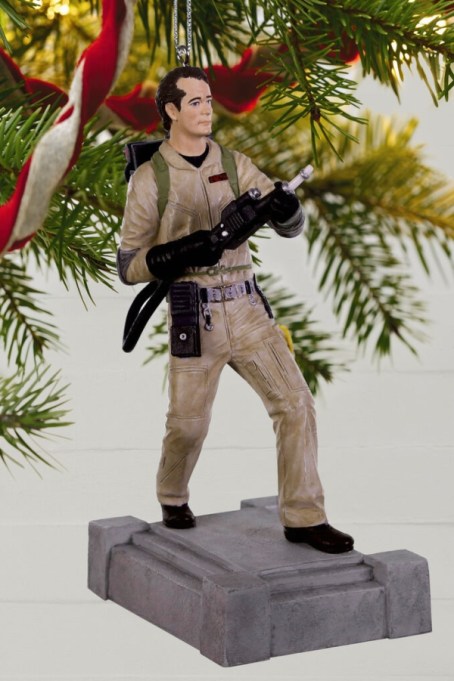 Now that Bill Murray has signed on to reprise his role as Dr. Peter Venkman in next year’s Ghostbusters legacy sequel, we’re even more obsessed with the character. This ornament, which shouts out Venkman catchprases, makes us even more excited for the new movie. 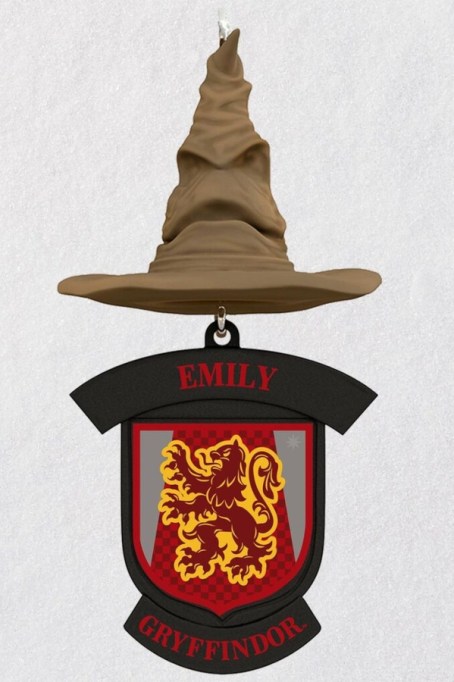 Let everyone in your family show off which Harry Potter house they belong to with this customizable sorting hat ornament. (Ravenclaws, FTW!) 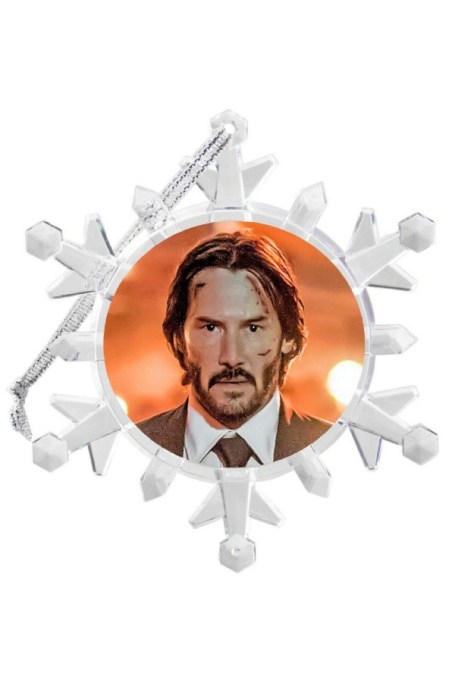 If anyone deserves the renaissance he’s experiencing, it’s Keanu Reeves. This snowflake ornament is a fitting tribute since it features one of his biggest roles of the year: John Wick. 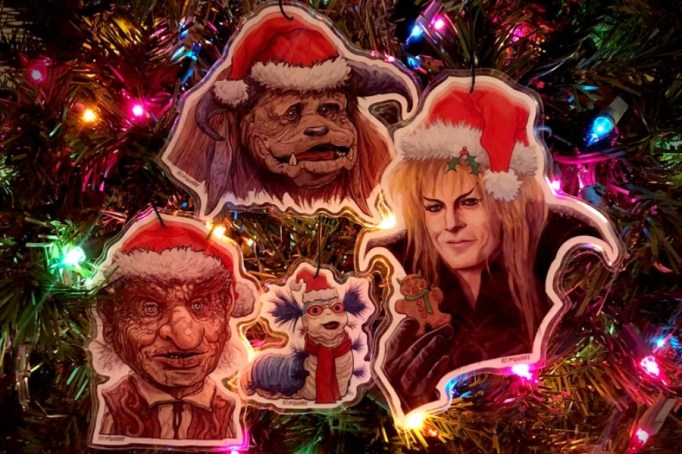 You can literally never go wrong with Bowie. This set of four ornaments oozes ’80s nostalgia, which is once again super-trendy. 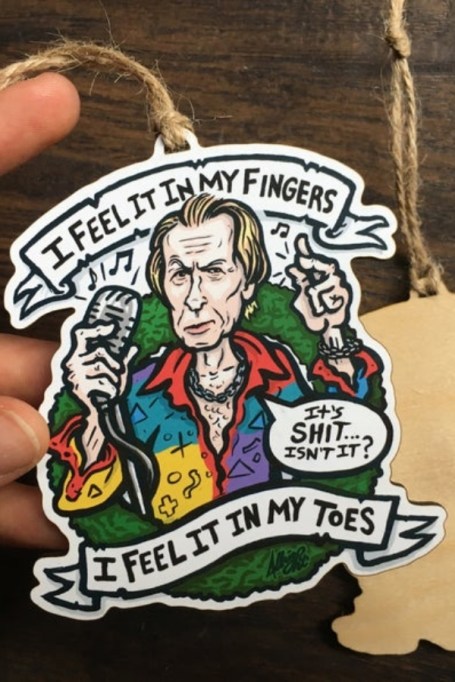 Is it even Christmas if you don’t watch Love Actually at least once? Every time you look at this ornament, you’ll ask yourself the most important holiday question: WWBMD (aka what would Billy Mack do)? 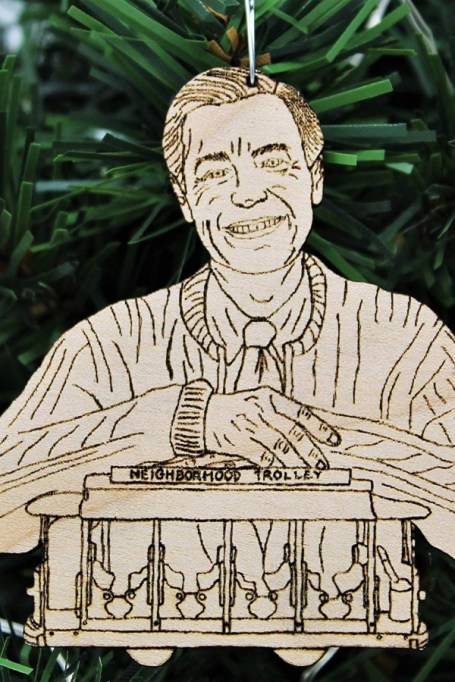 Few people embody the holiday spirit better than the late, great Mr. Rogers. It’s the perfect time to hang this tribute ornament since A Beautiful Day in the Neighborhood, starring Tom Hanks as Rogers, dropped this year. 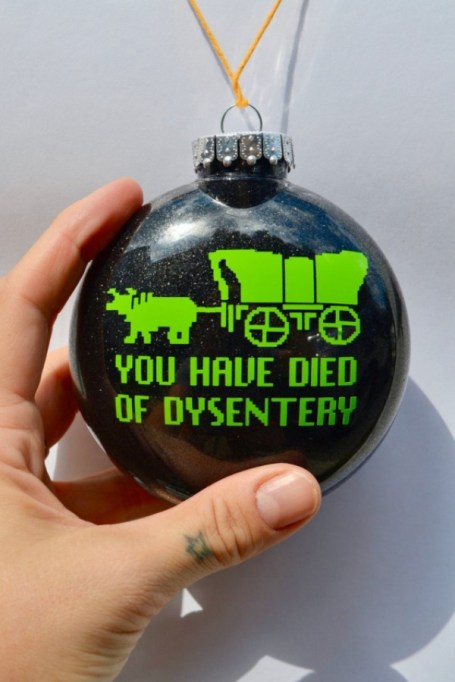 With continued buzz over a possible reboot of this classic ’90s computer game, we’re trying to will it into being with this cheeky ornament. 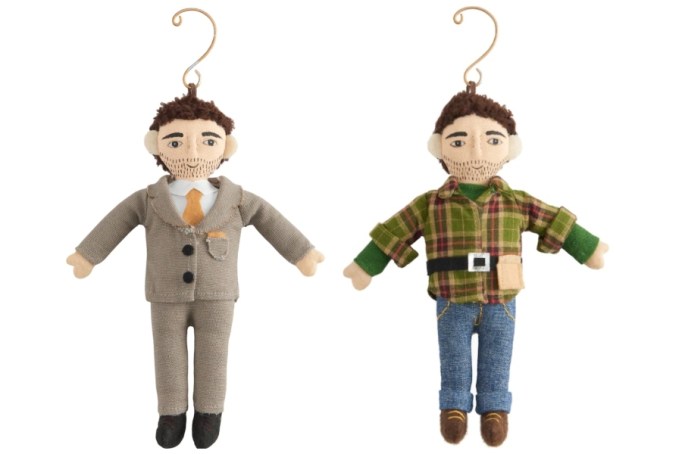 Let’s just be real: It was only a matter of time before Drew and Jonathan Scott hijacked our Chrsitmas trees. They took over our TVs long ago. 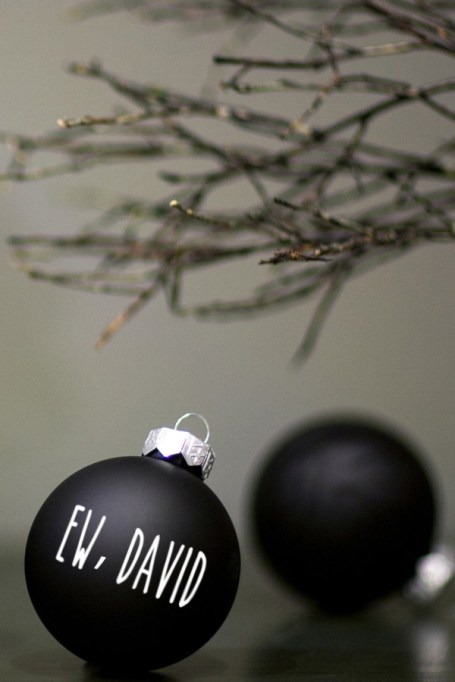 While we’re sad Schitt’s Creek announced it is ending next year, we’re stoked to see ornaments that pay homage to clever show. Don’t these matte black baubles look like something David would carry in Rose Apothecary? 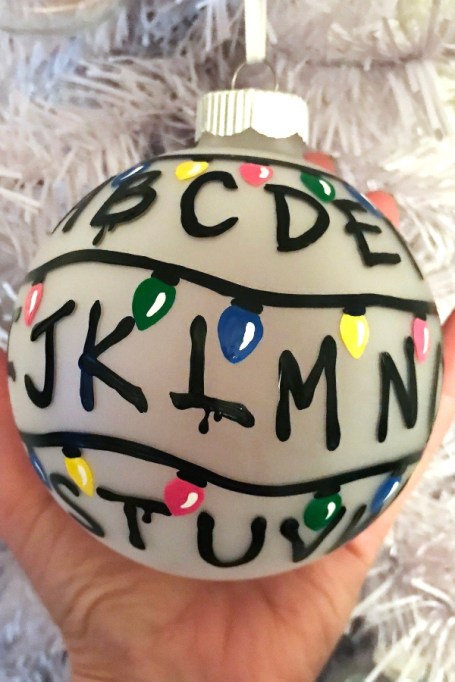 This year brought a totally bitchin’ new season of Stranger Things, so you obviously need an ornament inspired by the Netflix series. Until someone creates a rad Starcourt Mall version, you can’t go wrong with the classic wall of lights.

The ‘When Calls the Heart’ Water Tower 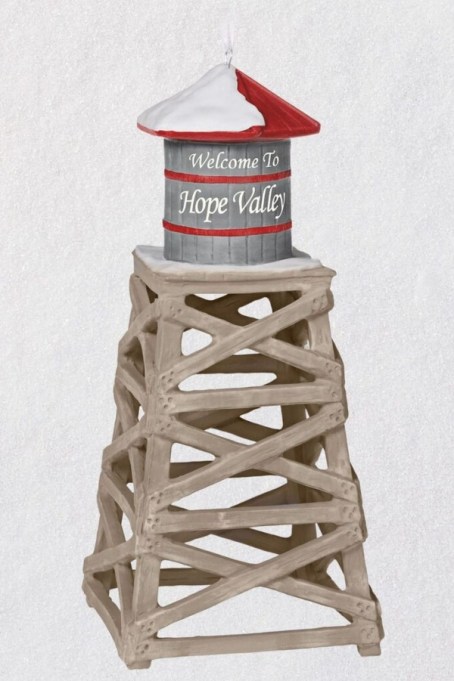 Not even Lori Loughlin’s shocking involvement in the college admissions scam (and subsequent firing) could bring this sweet show down. Hope Valley will always have a place in our hearts and, now, on our tree. 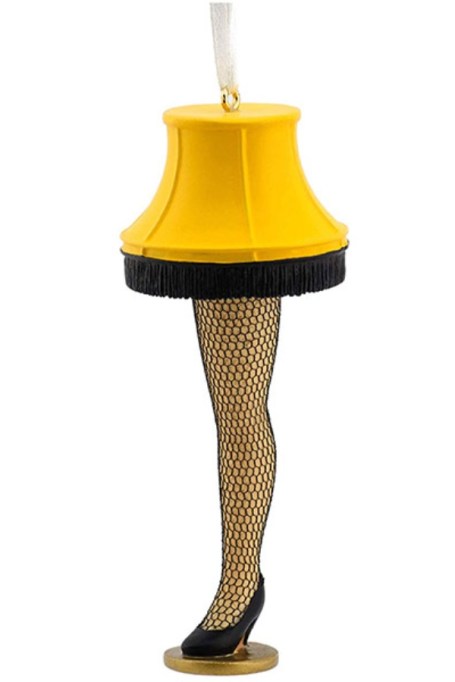 F-R-A-G-I-L-E… must be Italian! A Christmas Story is the quintessential holiday film, so anyone who sees this leg lamp ornament is bound to get a kick out of it.