A COUPLE’S first photo as man and wife was hilariously upstaged by a swimsuit-clad passerby who stopped to watch the wedding.

Taking to Reddit user Calego posted two snaps taken during the ceremony, seeing the bride and groom sharing their first kiss and then making their way back down the aisle.

But in both photographs the woman wearing the blue bathing suit takes centre stage – proving rather distracting from the newlyweds.

This was despite the beach being cordoned off for the ceremony to keep the public away.

Unsurprisingly, the couple was less than impressed with their uninvited guest, sharing the photo on Facebook before it was reposted on Reddit.

Captioning the snap they wrote: “They put up yellow police tape all around the beach for this wedding, yet somehow this random lady in the blue swim suit STILL felt the need to stand HERE of all places and watch the whole thing.” 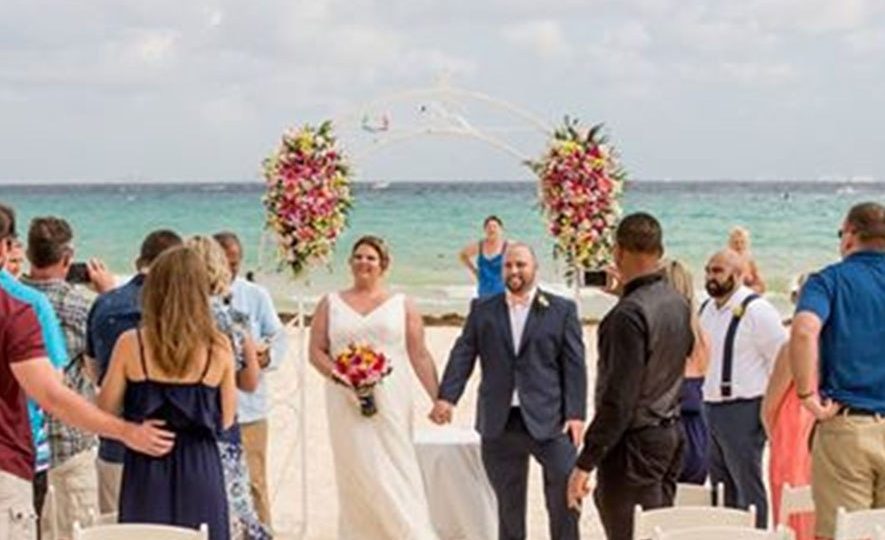 But fellow Redditors managed to see the funny side, sharing their thoughts in the comments.

One wrote: “She was their something blue.”

Another joked: “TFW you come out of the sea and find a wedding occupying your sun lounger.”

“I think it adds more to the memory actually… it’s just funny” said another.

In other wedding news, this cheeky bride and groom have been blasted for asking people who can't attend their wedding to give them cash via Paypal.

Meanwhile this bride was shamed for walking down the aisle in a gown covered in beer cans.

In other wedding news, we told you how this frugal bride has reworn her wedding dress everywhere including the gym and the supermarket.

A firefighter battling the El Dorado Fire in California has died