The exuberance felt by all in New York at the return of fashion week for Spring 2022 was matched in festoonery by designers and audiences alike. From Carolina Herrera’s stunning puffball gowns to Tom Ford’s disco-infused brilliance on the closing night, high spirits and heady looks proved NY can still deliver.

Among our favourites; out-there back-to-the-office dressing at Proenza Schouler and Peter Do, denim done differently at Coach and body-skimming classics at Khaite and Rachel Comey. While big names including The Row, Ralph Lauren, Marc Jacobs and Oscar de la Renta were absent, new and highly shoppable Eckhaus Latta and ever-stronger Joseph Altuzarra and Brandon Maxwell filled the gaps. Collections shown outside dazzled in sunshine as big names including Michael Kors and Tory Burch claimed cautious optimism in the autumn air. 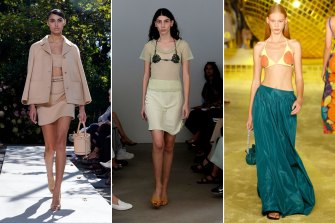 Bra tops, bare midriffs and peek-a-boo tums are unavoidable for next summer. Not as terrifying as you might think, designers produced versions for everyone. Really.

A bra top above high-waisted trousers or skirts, beneath an oversized jacket kind of works, as Michael Kors.

This was granny dressing without the granny. Forget dowager-style for next summer, just hack five inches off your old twinset cardi, wear your silk scarf as a bra underneath – and boom! 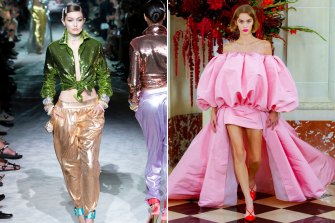 The party spirit was everywhere. Tom Ford offered guests champagne on the terrace at the Lincoln Centre before dazzling with his show.

Models, led by Gigi Hadid, shone in the most splendid gold lamé knickerbockers. And satin combat trousers, rich purple-and-chocolate sequin vests and sumptuous wear-with-anything dinner jackets made us want to go clubbing right after the show.

Ford’s star guest Rita Ora headed off to the MTV Video Music Awards afterwards and some in the audience wished they had bagged a VMA ticket too.

The house of Carolina Herrera celebrated its 40th Anniversary with a glorious rhapsody of going-out garments. A sparkling white mini frou-frou, sweeping red taffeta and a pink puffball bodiced mini dress with a Cinderella train hit home. Critics agreed the highlight of the week was Herrera designer Wes Gordon’s show at New York’s latest art space, Salon 94 on the Upper East Side. 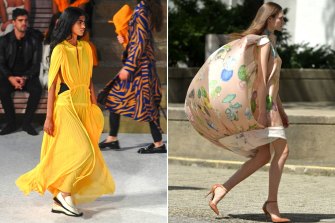 3. Turn up the volume

An unusually romantic spirit ran through a number of collections, in the form of subtle volume in luxurious crepe and silk.

Not known for such lightweight, colourful concoctions, the change in direction is deliberate.

“We’re starting to build up a library of fabrics,” commented designers Jack McCollough and Lazaro Fernandez after the show.

“We wanted to use fabrics with stretch and movement like this beautiful, bi-stretch crepe. 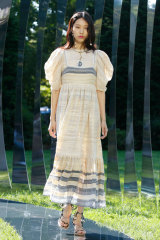 “These are joyful clothes to step up, explore, enjoy life in.”

The prairie dress has officially left town, taking floral prints and pie-crust collars with it.

Even Batsheva Hay, Laura Ashley-inspired queen of the prairies, has chopped skirts mid-thigh and replaced floral cottons with silver or bronze lamé.
In one of the first shows, a gaggle of Ulla Johnson fans welcomed the brand’s usual pintucked, pretty detailing which this time incorporated a more wearable, less flouncy look. Tiers were tiny, if present at all, florals replaced by ethnic prints in bold rust and gold. Longer lengths endured elsewhere, with Catherine Holstein at Khaite abandoning her medieval princess looks for next summer in favour of urban-friendly, silk body wrapping and a bra top over a billowing stretchy silk midi as alternatives to La Prairie.

At Joseph Altuzarra, tie-dye versions of long and stretchy garments offered yet more options for fans of summer colours. 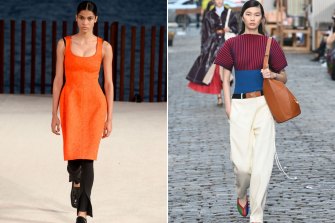 New York had work looks to turn heads and intimidate the competition, whatever your industry.

Newcomer Peter Do showed another most-wanted collection of the week, featuring oversized trouser suits that incorporated femininity through a lack of straight lines.

Later in the week, Tory Burch offered cool, flat-fronted, man pants in a thick cream cotton that some of us wanted to haul right off the model and take home there and then. 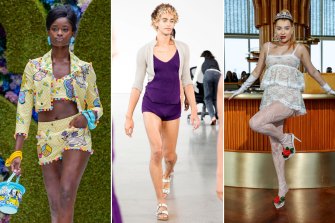 6. Skimpy is the new body con

For the past few seasons, body-conscious styling has returned to the catwalks. In New York it took a more extreme turn.

While Maisie Wilen was gorgeous fun for the Tik Tok set, to get the skimpy vibe in a more mature way, critics were thrilled by Rachel Comey. 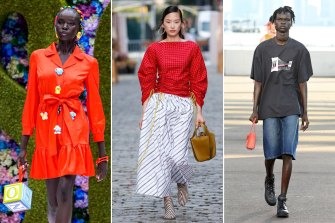 Nano, tiny and small bags worn all at once provide next summer’s most cumbersome look. Great news for luxury bag brands, a tad tiresome for the rest of us.

Ulla Johnson claimed the look with models wearing pouches and purses on strings over belt bags and cross-bodies.

There were gaggles of tiny-tot carryalls at Coach and Maisie Wilen. At Moschino, relief came in the shape of a baby-toy, cube bag.

At Coach, the paper-bag shaped leather square first designed by Bonnie Cashin in the 1950s reappeared in collectable, smaller versions.

Joseph Altuzarra showed us triplets of tiny bags on one leather strap. In contrast, Tory Burch brought out a new Lampshade bag, with highly crafted seams and hefty stitching.

In contrast to every other brand, Khaite and Peter Do did humongous, hardware-free totes that looked cool but will have to be filled with care to avoid toppling over on the bus. 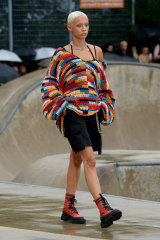 Casualwear was the biggest casualty for Spring Summer 2022 in New York. People may want to go sequin-free for some of the time but there were scant offerings for this other than at Monse.

“This collection is inspired by New York,” he told the Telegraph. “It’s about all the places we go and the clothes we throw on to get there.”