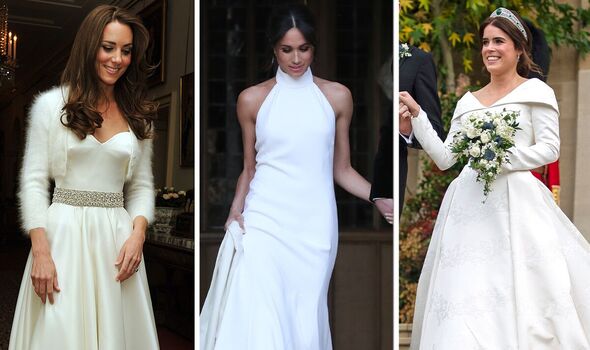 As with any royal wedding, speculation was rife in 2018 over Princess Eugenie’s wedding dress designer. Peter Pilotto and Christopher de Vos designed Eugenie’s first wedding dress, and it featured an open back so as not to conceal the Princess’ scar from scoliosis surgery.

The thistle of Scotland was included to show the couple’s love of Balmoral, while an Irish shamrock paid tribute to Eugenie’s maternal family.

The York Rose was included in tribute to Eugenie’s family York title, while Ivy was included to reflect Eugenie and Jack’s residence of Ivy Cottage at Kensington Palace.

While Eugenie’s first wedding dress was considered a royal triumph, she swapped it for an altogether different dress for her wedding reception later that day.

Eugenie wore a sweeping pink dress with long sleeves and a cinched waist, accessorising with an heirloom hair slide that belonged to the Queen.

Zac Posen designed a pink dress for Eugenie after being inspired by the “blush of an English rose”, according to the Royal Family’s website.

The site added: “The pin-tucked plissé is cut on the bias and mixed with signature drapes.

“The White Rose of York is subtlety embroidered on both the shoulder and back which hold together the cape.

“The silk for the gown comes from Biddle Sawyer Silk.”

Few other royal brides have been as daring as Eugenie was to wear a non-white gown to their wedding receptions.

In 2011 Kate, Princess of Wales wore a long-sleeved bodice gown to her Westminster wedding service which was reminiscent of Grace Kelly’s iconic 1956 wedding dress.

But Kate later changed out of her Sarah Burton for Alexander McQueen lace gown for a more modern take on a royal wedding gown by the same designer.

Kate’s white second dress featured a flared A-line skirt cinched with a bejewelled belt, and she wore a fluffy stole around her shoulders.

The new Duchess of Cambridge literally let her hair down for her wedding reception, choosing her signature blowout instead of her ceremony half-up half-down style.

The Duchess of Sussex wore a bright white minimalist gown by Clare Waight Keller for Givenchy complete with mid-length sleeves and a cathedral-length veil embroidered with Commonwealth flowers.

But when it was time to party at her Frogmore reception, Meghan wore a white Stella McCartney halter-neck wedding dress which she accessorised with strappy Aquazzura heels and Princess Diana’s aquamarine ring.

Before Eugenie, it is important to note that one royal bride wore a pink wedding dress before way back in the 1930s.

Princess Alice, Duchess of Gloucester wore a blush-pink gown designed by Norman Hartnell, the designer who also made the late Queen’s wedding dress.