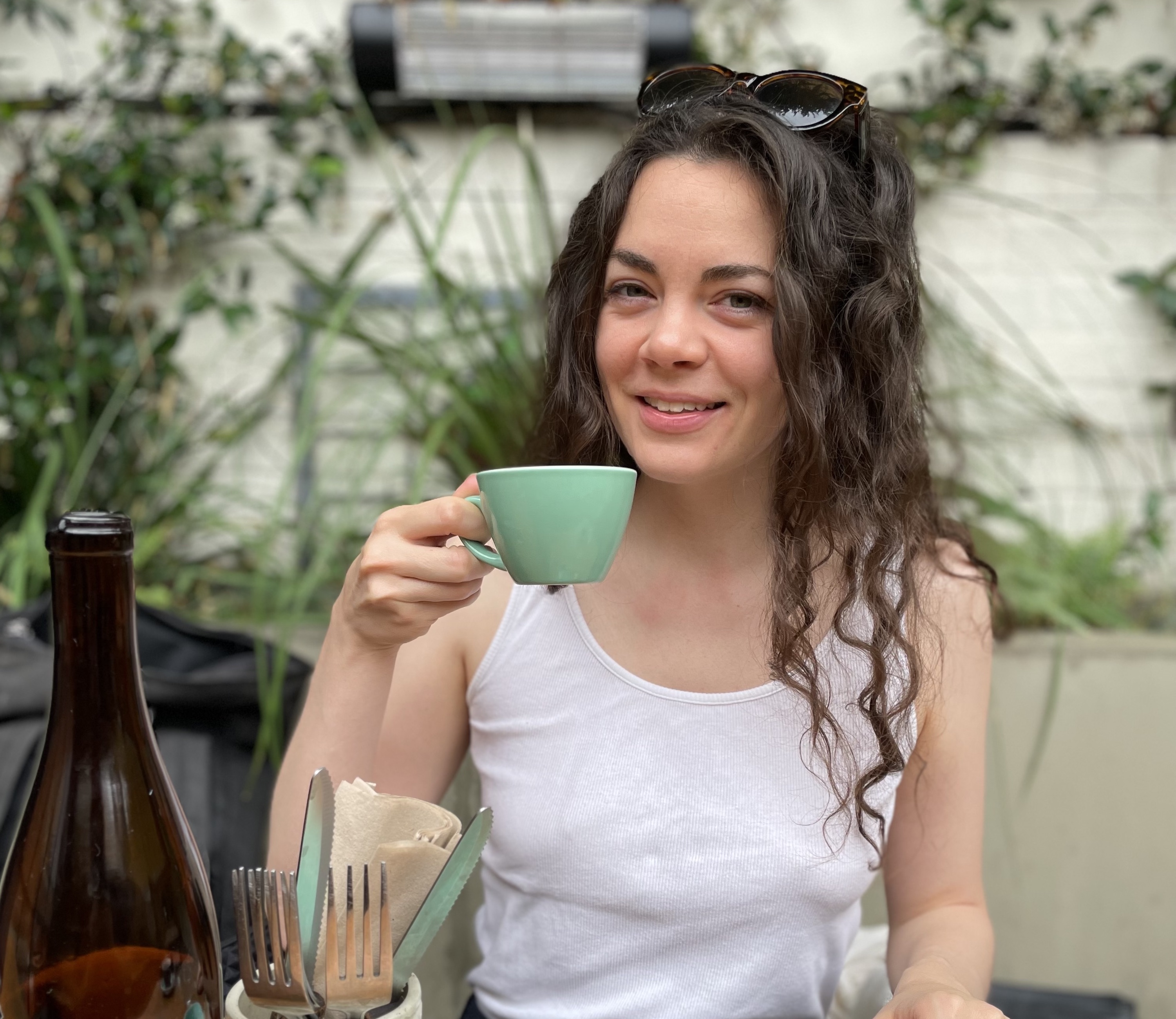 A jolt of nerves zinged through me at the sight of the other diners.

‘Would they pass judgement on the flatness of my chest?’ I asked myself. ‘Could I hold my nerve and order my food without succumbing to self-consciousness?’

A couple weeks ago, for the first time ever, I stepped into a busy café completely braless.

I reminded myself that I’d been training for this moment, increasing my tolerance for bra-free outings throughout the pandemic, and slid into my seat.

After I gobbled up poached eggs, I relaxed my shoulders and sat tall, relishing the air around my boobs — the freedom of my ribcage and the sheer exhilaration of sticking it to the patriarchy.

Over lockdown, my relationship with bras, my boobs and beauty ideals has radically changed.

I know for some people — as with make-up and fashion — bras are genuinely part of their self-expression. That was never the case with me. My loyalty to the bra was driven by shame.

I spent many nights during my pubescent years lying in my single bed, clutching my self-confessed ‘bee stings’, bargaining with the gods to grant me a C-cup.

Aged 14, I spent my babysitting money on a padded, push-up bra. It was a white, frilly number with foam inserts, underwire and a plastic device in the centre with three settings to amp up your cleavage by bringing them closer together. My new profile made me feel powerful, fortified against any humiliating taunts about my ‘tiny tits,’ and even a little bit sexy.

Over the next 20 years, my boobs never grew beyond a B-cup.

I made peace with their size — I found solidarity with small-breasted friends, and my larger-chested classmates made it clear that life without backache or boob sweat was a gift — but I became embarrassed by their shape and the fact that they weren’t in proportion to my bum.

A rule etched itself in my mind: I needed to wear a padded bra whenever I was in public. I’ve always considered myself a feminist, and I’ve never viewed anyone’s body but my own with this harsh lens. But through my irrational, dysmorphic eyes, I was convinced that without a bra my silhouette was wrong.

For a long time, I felt that I was a person who was hotter with clothing on, because I could mask my imbalanced proportions (or flaws) with padded bras.

Since bras are entirely cosmetic for me, when I was at home, I told myself I was free to be braless. But since the majority of my time was spent at work, seeing friends and going on dates, I was almost always strapped in and hoisted up.

I got power and confidence from masking my ‘flaws’ and conforming to the standard boob shape. I fit in and, just like that 14-year-old girl, I felt armed against scrutiny and judgement.

When the pandemic hit, I was living alone and working from home, and like so many people with boobs, only donned my bra to nip to the shops or attend Zooms. I relished being free from constriction, from the extra layer and straps that were forever too tight or too loose.

Then, in June last year, 20 minutes into a professional Zoom call, it dawned on me: I was sans bra. No one had looked at me oddly. Being braless felt entirely natural until I realised that I’d broken a convention I should have followed. I felt like a renegade.

I’d rebelled against my own rule and nothing bad had happened. From then on, Zoom was a bra-free zone, and I started to question my steadfast devotion to brassieres.

To test it, I began venturing out of the house without a bra, slowly increasing my level of risk — from daily walks, to take away coffees. It was titillating at first, like I was getting away with something mischievous. No one said boo, looked at me twice, or even cared. I stood up straight, uncrossed my arms and carried on with pride.

I was afraid of other people’s silent, secret judgements. And I was worried that I’d behave self-consciously, hunch over, move less confidently, or try to hide myself.

When I announced to my boyfriend that I was going to pick up curb-side pints braless, his ‘Whatever you want, babe’ response was further proof that no one cared what my boobs were in, but me.

As the weather got warmer and the city began opening up again, I traded my puffy winter coat for my jean jacket, then light sweaters, then blousy tops and I mustered the gumption to go to the pub, library and a pottery session completely braless. I had to work up the courage beforehand but, each time, I felt more at home in my body.

I appreciated the gentle bounce of my boobs as I walked, the unfettered feeling of my shoulder blades and the lack of foam brushing against my arms as I moved. Enjoying these physical sensations totally rewired how I thought about my body.

Beauty ideals are rammed down our throats from birth. Not just via advertising but by our culture — it’s rare to see grown women, out in public, with breasts that aren’t corralled into a standardised shape.

If the natural form of your breasts diverges from what you perceive as ‘normal,’ it’s easy to assume that something is wrong with you, and any number of companies are there to sell you solutions to your woes through glossy ads.

And I did feel confident in the bra. But it’s a fickle confidence, being reliant on a piece of clothing. The bra treats the symptom not the cause.

I’d confused self-assurance with protection against criticism. And that protection superseded anything else, including my own physical comfort.

Having the chance to spend lockdown without a bra, feeling comfy became the norm. The more I burst out of my habitual bra-wearing, the more I saw my devotion to it for what it was: a daily act driven by shame and not a true reflection of what actually makes my body feel good.

This spring, on one of my solo neighbourhood walks, I caught my reflection in a shop window. Did my profile look flat? Yes. Did I care? No. And that’s the liberation from the beauty standards I’d internalised I began to taste.

I’m not alone in this. Gillian Anderson received overwhelming support when she recently proclaimed that she was done with bras.

Of course, not all people with breasts are able or want to go bra-free but a poll from YouGov showed that 34% of women have used lockdown as a chance to go bra-free—so the no-bra conversation is certainly having its moment, and one that I hope will last for a long time.

As we return to ‘normality’ however, I’m tempted to bra-up again for some social situations. I want to fill out my clothes, and I want the social currency of round boobs and balanced silhouette.

That indoctrinated part of my brain worries that being braless means I’m less attractive to potential mates. But that’s just my ego and internalised patriarchy rearing up once again.

I believe the sexiest people are the ones who are at ease in their own skin. I’m not quite there yet, but I want to be.

I would never want to tell other people with boobs how to handle them, but, if you think your commitment to the bra has been driven by duty or embarrassment, perhaps you could give it a whirl.

I hope that this collective braless era enables us to question why we’ve forgone our own comfort in the name of conformity, and if we can challenge it.

Easing out of my habitual bra-wearing has increased my confidence in my body as it is – and that feels radical and important.

As I stood to leave the café, I surveyed the other diners. It hit me: no one had noticed me, let alone my braless boobs — but even if they had, it didn’t matter. I had dared myself to put my own comfort over a false confidence, to pursue a new way of being in my body over trying to fit in.

And I was proud of my small act of rebellion.