Alessandro Michele delivered on his promise to change how fashion shows are presented and consumed by the masses. In May, the creative director of Gucci announced that he would limit his output to two coed collections each year and utilize formats that engage fans of the label—and not just insiders.

Yesterday, the creative director of Gucci debuted the finale of Ouverture of Something That Never Ended, a seven-part miniseries showcasing the brand’s looks that will be in stores during the second half of 2021 (what others call pre-fall and fall). Co-directed by Academy Award winner Gus Van Sant, the cinematic spectacle transports viewers into a world marked by quirk, artistry, and, of course, impeccable style. 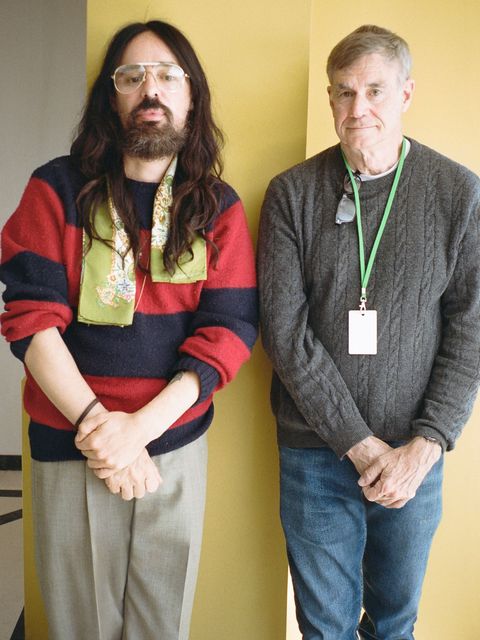 The highlight, however, was Ouverture of Something That Never Ended. Shot in Rome, the miniseries follows performer Silvia Calderoni throughout her day, from waking up in her apartment to performing errands around the city, bumping into a cast of eclectic characters. The episodes include cameos from Gucci brand ambassadors Harry Styles, Florence Welch, Jeremy O. Harris, and Billie Eilish. All are outfitted in the label’s new collection, which consists of a mix of timeless Gucci stalwarts: ’70s-style suits, bohemian dresses, and sportswear-inspired separates.

Ahead, we recap the very Gucci episodes.

Calderoni wakes up in her Rome apartment and prepares to start her day. While getting ready, she listens to philosopher Paul B. Preciado, who gives a speech about gender and sexuality, on the television.

Calderoni sits down and chats with singer-songwriter and poet Arlo Parks at a cafe, which also features a naked couple talking at a distance. Calderoni then enters a bathroom that transforms into a theater.

Calderoni is at a post office, where she’s seen writing on a postcard, “Though we breath the same air, love is a wonderful thing. Ordinary oxygen doing an extraordinary thing. Your energy looks stunning. A glowing magnetic field. Worth every color of the rainbow my love for you is sealed. I love you.” Also in the episode: Harry Styles, who is in the garden, chats with an older gentleman over the phone.

Playwright Jeremy O. Harris encounters Calderoni at an empty cafe. The episode then cuts to a troupe in a theater performing choreography by Sasha Waltz. “The border between individuals dissolves,” Waltz says. “They become one body—a liquid organism with a collective consciousness. For us, it was very emotional, because we were able to actually touch each other again after nine months of social distancing. The dancers almost cried. We as humans desire closeness, intimacy, and care, and this image conveys that idea.”

Calderoni goes back to her apartment and opens her windows, eyeing a motley crew of neighbors. They include a band in rehearsal, while artist Ariana Papademetropoulos paints at her desk; a woman reading a poem; another hanging clothes to dry; and a woman sitting fully clothed in her bathtub, watching Billie Eilish’s music video for “Therefore I Am.”

Episode 6: “At the Vintage Shop”

Calderoni enters a Gucci store that is designed to look like a vintage shop. It is owned by Giulia Salvatore, and Florence Welch, who writes notes and secretly slips them to customers, browses the wares.

Calderoni walks up to a building, waiting outside for her friend, singer Lu Han, who is ironing a dress in his apartment. They chat on the intercom before Calderoni joins a man in a red coat on a moped. The two then drive around Rome.