A BRIDE-TO-BE'S beauty prep ended up ruining her big day as she claims eyelash extensions landed her in hospital with SLICED EYEBALLS – leaving her at risk of going blind.

Alexis Theriot decided to get her eyelashes done ahead of her big day to achieve a 'glam' look and speed up the process of getting ready on the morning of her wedding. 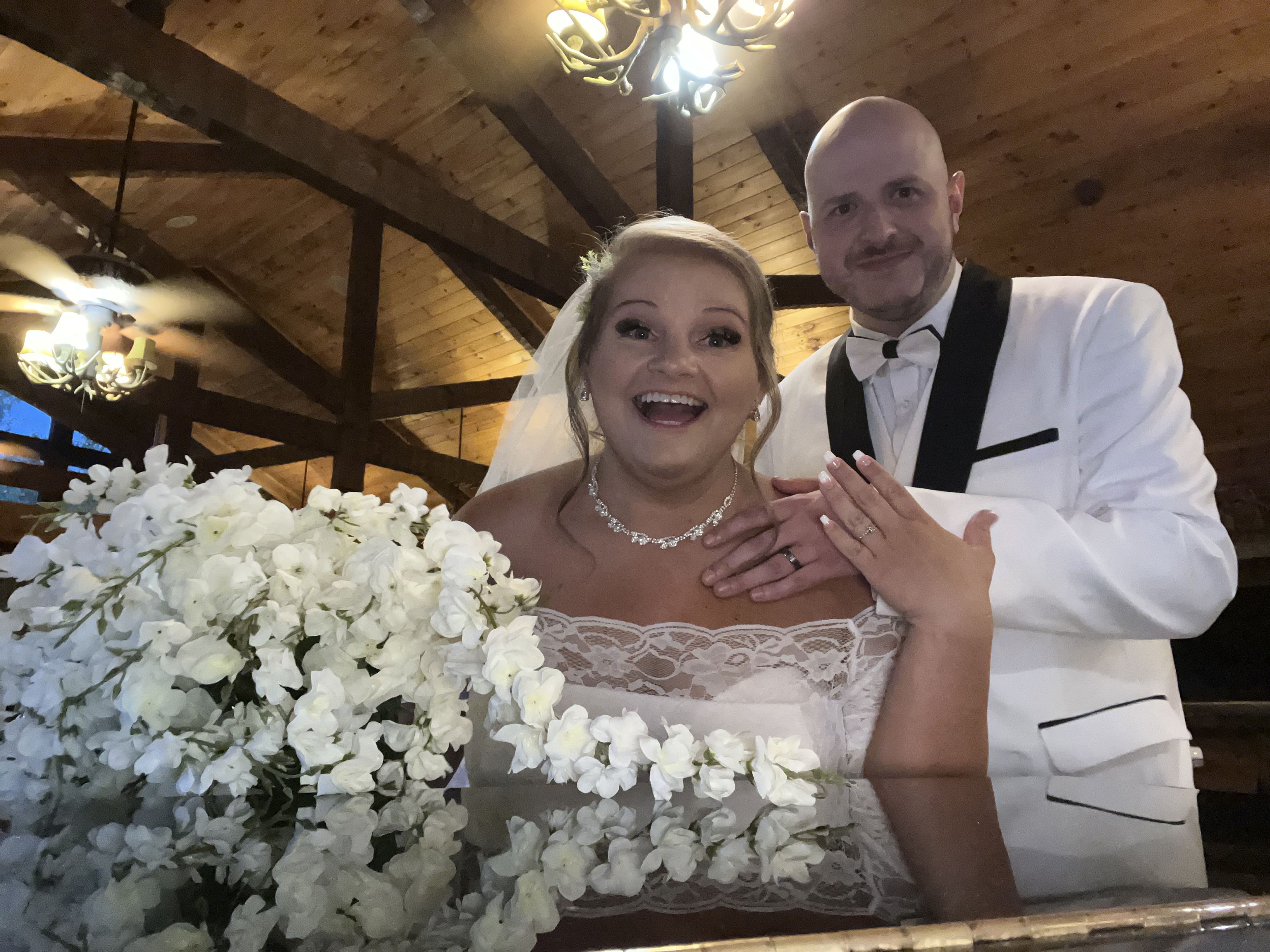 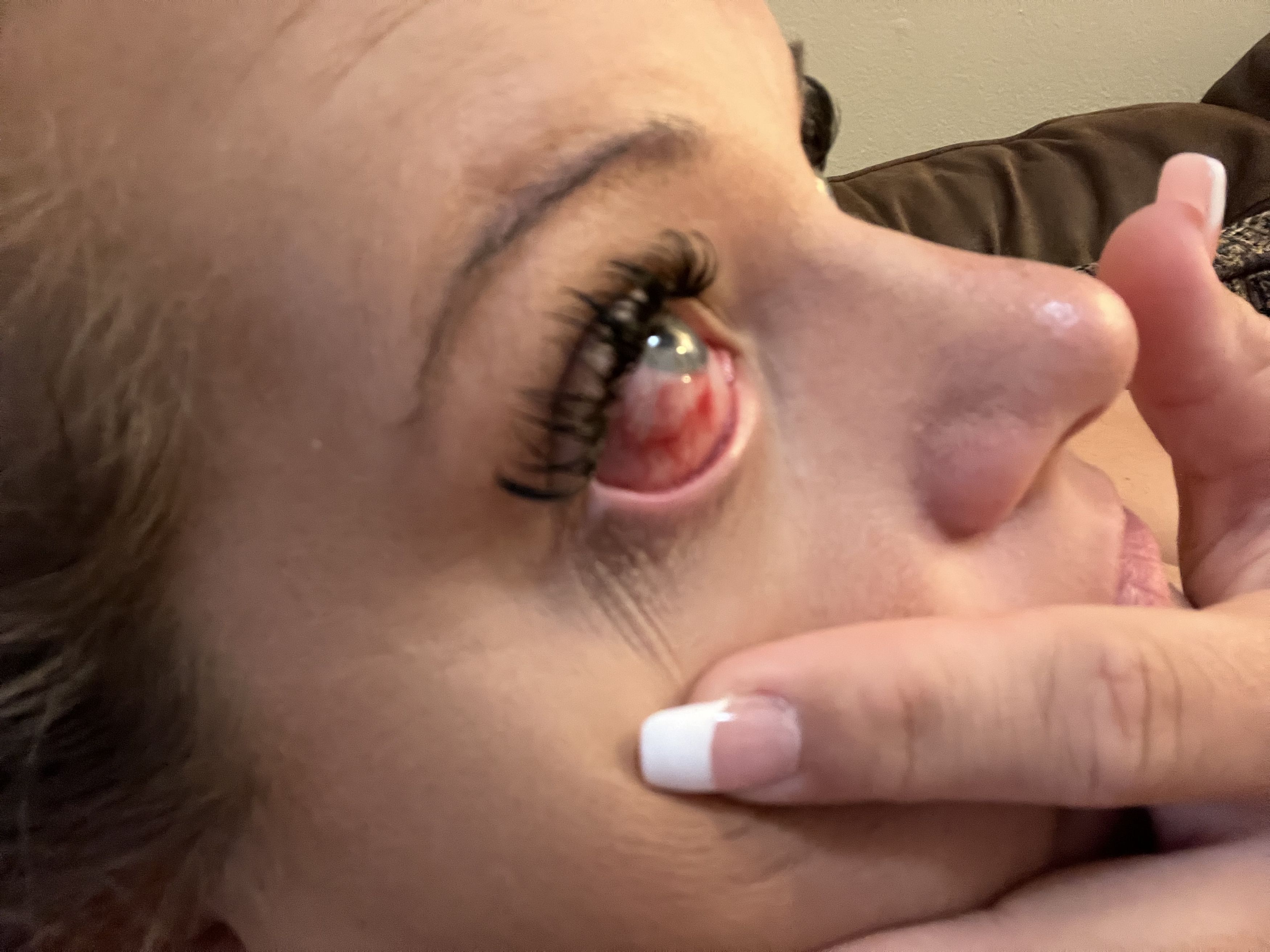 The 33-year-old went to a lash technician, who had done her eyelashes before, just two days before she was due to get hitched to her fiancé Cameron Theriot, 33, on September 2nd.

During the two-hour appointment, the beautician applied adhesive tape to the lower lash line to prevent the eyelashes getting glued together, which Alexis says was immediately uncomfortable.

Since the woman reassured her that her eyes must just be 'sensitive', Alexis says she persevered with the appointment.

The mum-of-four then made the gruelling ten-hour drive to her wedding venue the following day despite still being in pain with 'burning eyeballs'. 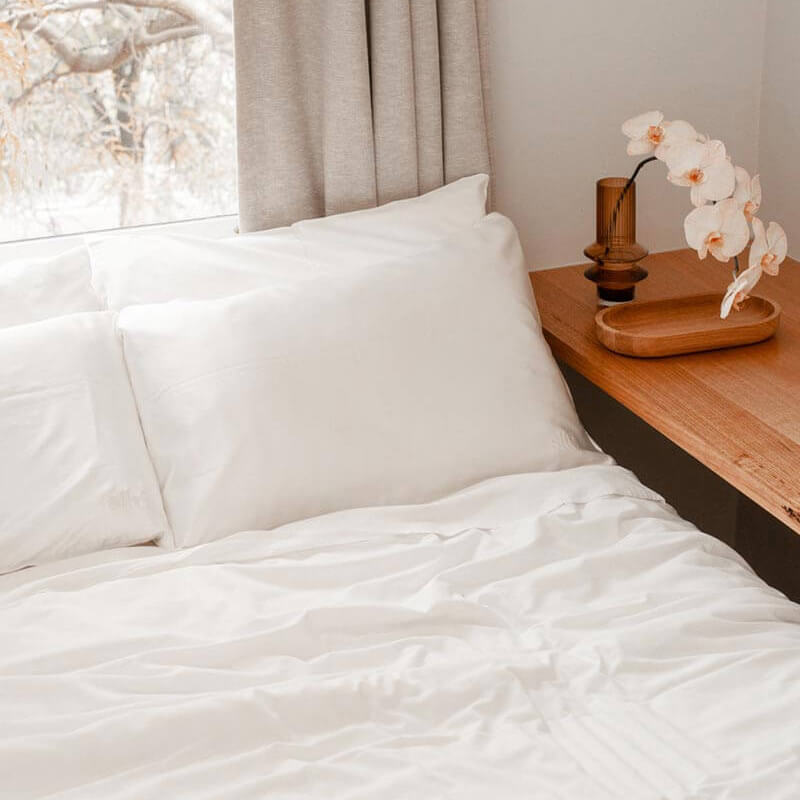 Best silk pillowcases to care for your skin and hair 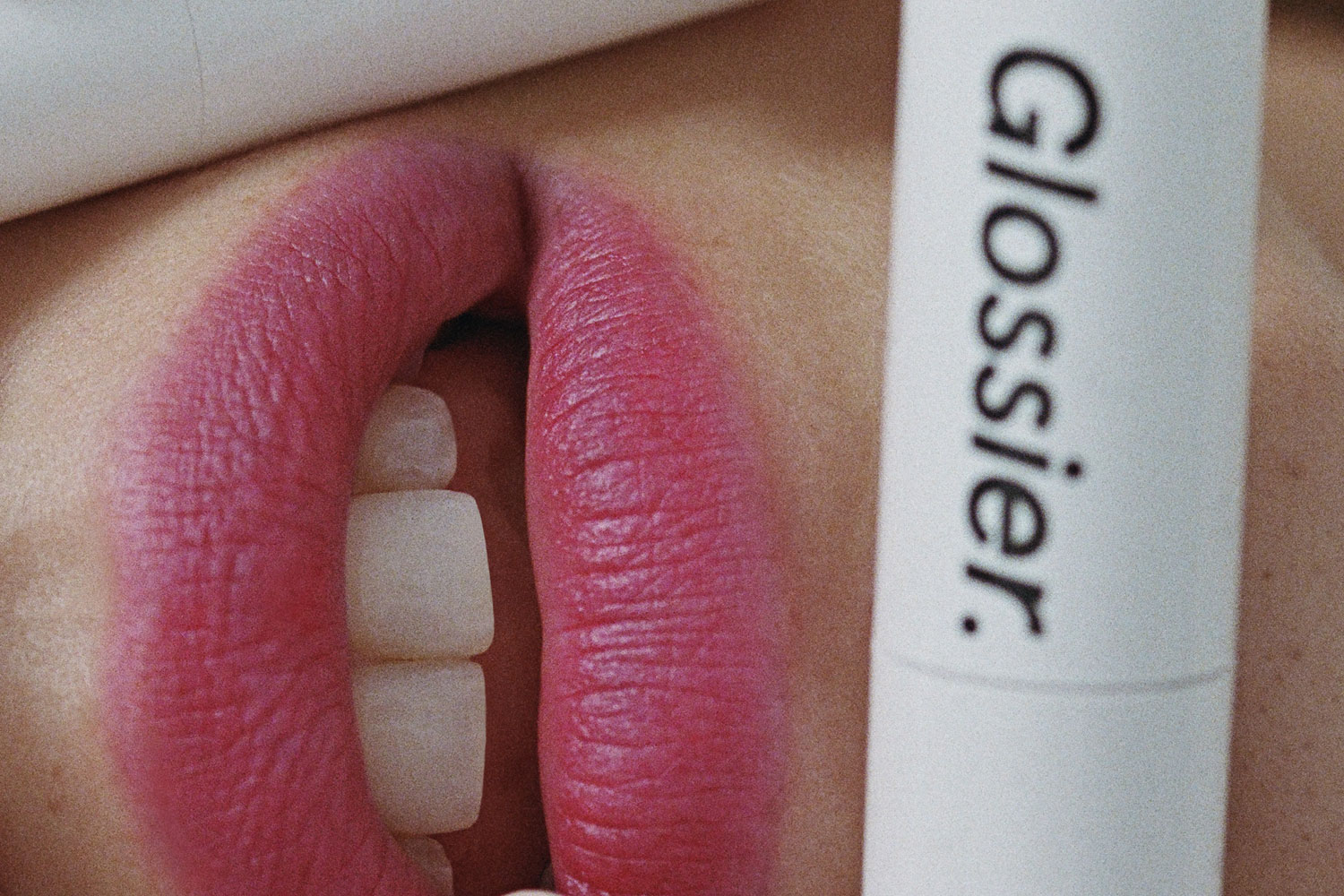 Doctors later revealed that the edge of the tape had been rubbing against and cutting almost the entire length of her eyeballs during the appointment.

The damage caused haemorrhages and extremely high pressure in her worst affected right eye – that has left the special needs health worker still at risk of losing her sight.

After spending most of her wedding day in hospital and barely making it in time for the ceremony, Alexis has now shared horrifying photos of her sliced eyeballs to warn about the risks of the beauty treatment.

Alexis, from Elkhart County, Indiana, US, said: "When I glam up I like to use a band, glue-on lash but I saw that lash extensions were a growing trend and I thought they looked really nice and saved a little bit of time.

My boobs are epic – I should've got them out like Denise, says Sarah Cawood

Mum mortified after daughter, five, made a 'dreamcatcher' for her room

"I thought instead of applying a lash each day around my wedding day I would just get my lashes done and they would be there for the whole week of my wedding and after – but I deeply regretted it.

"They tape your bottom lash line down so that when your eyes are closed and they're putting the adhesive on the top it doesn't glue your top lid to your bottom lid.

"She put the tape on and it felt very uncomfortable, I told her and she said 'your eyes are probably sensitive' but my eye felt very irritated almost to the point of [it] being unbearable.

"When she was done she pulled the tape off and it was an instant relief but on the way home my eyes were hurting more and more.

"I tried to go to bed but I kept not getting good sleep because of my eyes – they were irritating me and kept waking me and the next morning it felt like they were on fire.

"I just pushed through and got my kids in the car to start my drive to Tennessee."

After embarking on the marathon ten-hour drive from her home in Indiana to her wedding venue in Tennessee, the bride-to-be says the pain in her eyes became increasingly 'unbearable'.

Alexis says she messaged the lash technician about her issues and took her advice to stop off and buy painkillers and eye drops but they failed to soothe her 'burning' eyeballs. 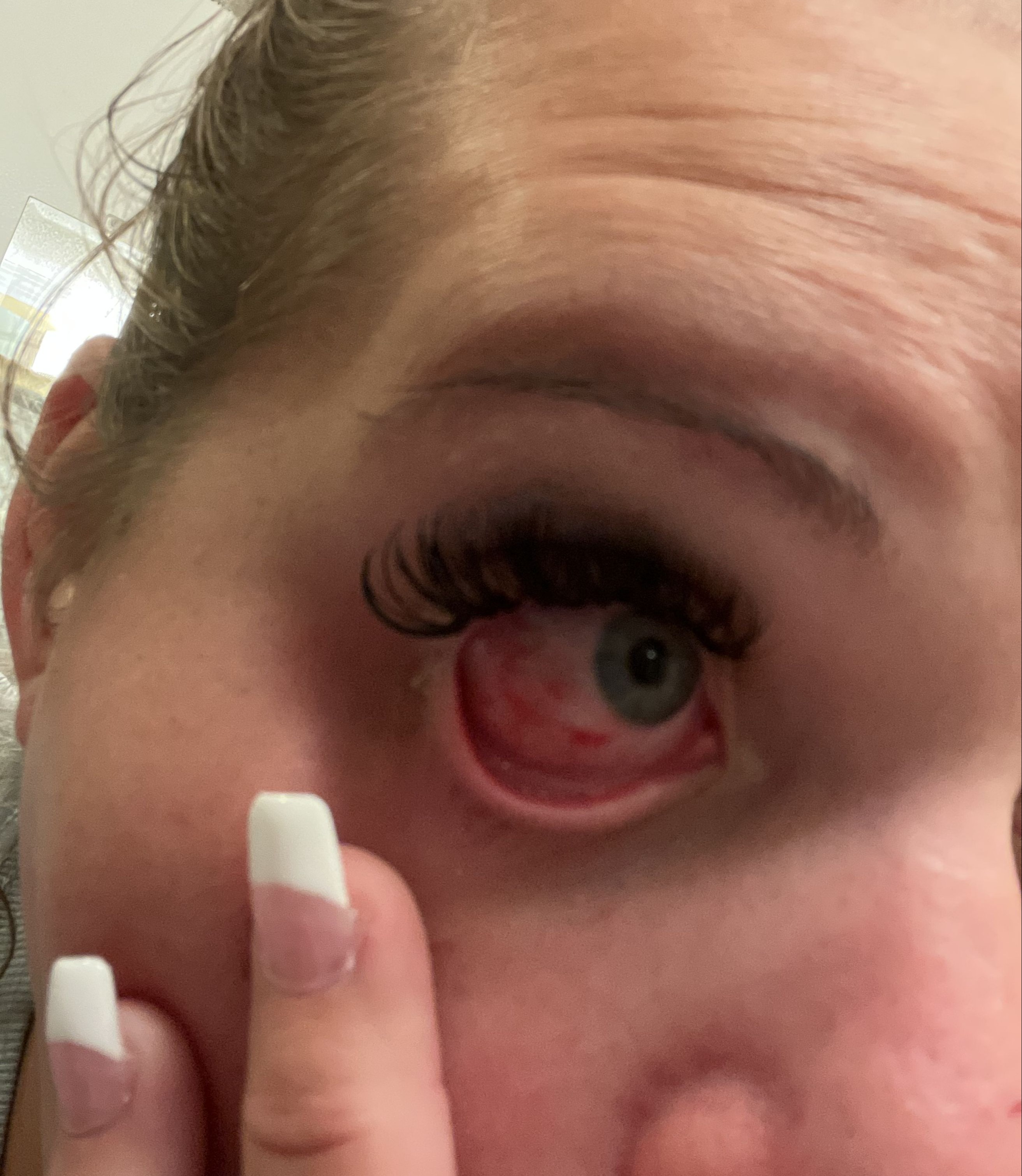 After finally making it to the mountain venue on the eve of her wedding, the mum sought advice from a friend who is an optometrist, who told her to see a doctor.

Alexis was forced to drive to a nearby hospital the following day, on the morning of her wedding, when it opened where she discovered the extent of her eye injuries.

The anxious bride-to-be then lost hours of her special day being examined by doctors and waiting for an essential prescription ahead of the 5pm ceremony.

Alexis said: "I had some puss and blood drainage from my right eye so they had to try and clean a lot of that off because it was crusted shut from sleeping.

"It was very painful for them to even touch the skin on the right side of my eye and touching my eye was even more painful.

"I started crying because of the pain and my tears actually stung my eyes worse. The pain was unbearable. 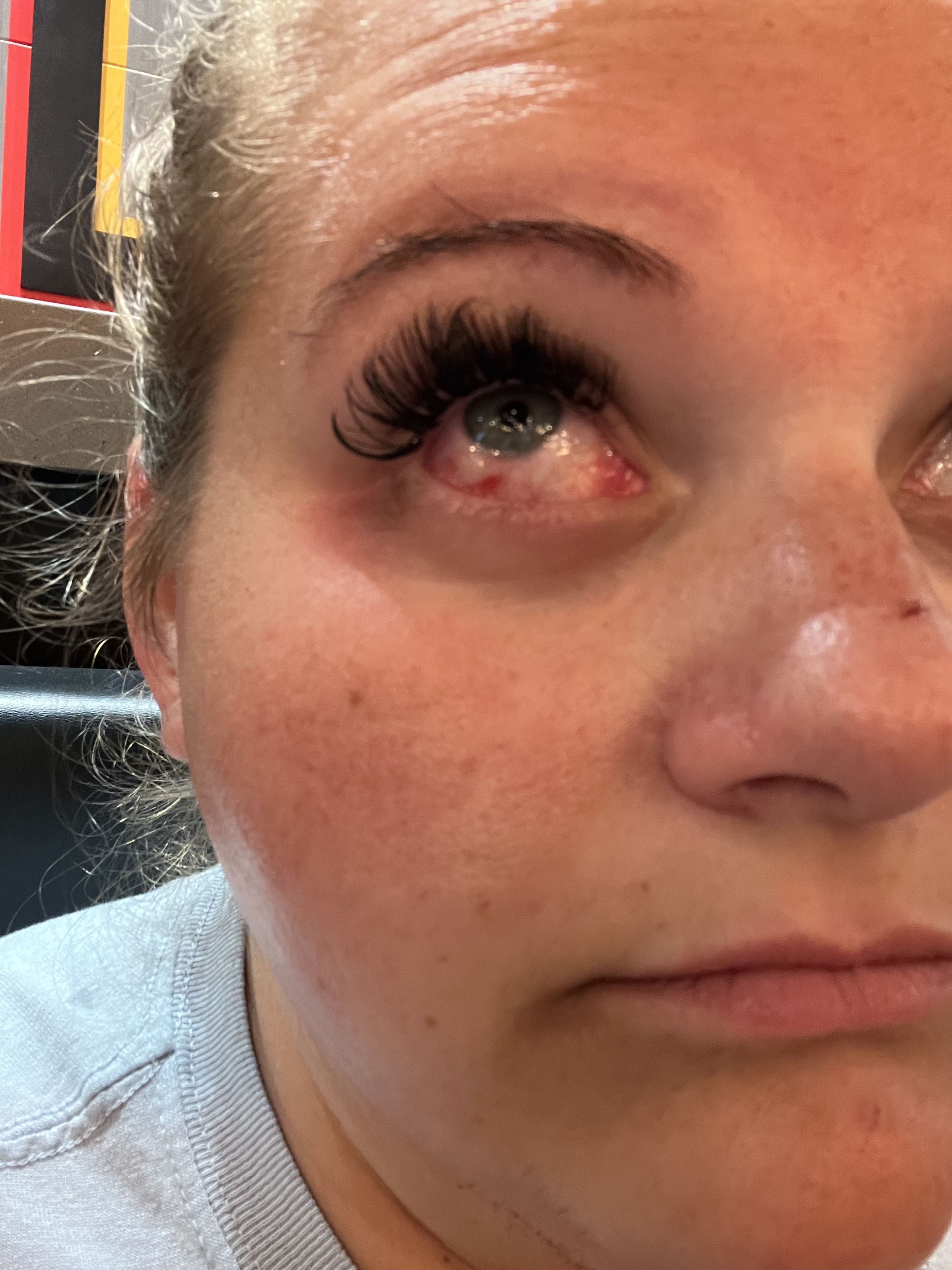 "The doctor put dye in both of my eyes and looked at them under a special light and told me that they were both cut and bruised and one was 'severe'.

"They said I had a haemorrhage in my right eye – a main one and a smaller one – so possibly two and the pressure was very high.

"If the pressure stays as high as it is now then I could get glaucoma and that could lead to blindness or other things.

"The doctors said the tape rubbing is how I got a cut the entire length of my eye because that is the exact placement of where the lower lash line is and the injury on my eye.

"The doctor told me that if I didn't get the eyedrops soon and a bad enough infection set in, it could take my eyesight and I needed to take it very seriously.

"I went to the pharmacy and it wasn't open yet so I had to wait two hours for it to open and then they didn't actually have the medication I needed so they called it in from another pharmacy."

Hospital doctors administered numbing drops to Alexis' eyes but she says they wore off after an hour and the excruciating pain set in again. 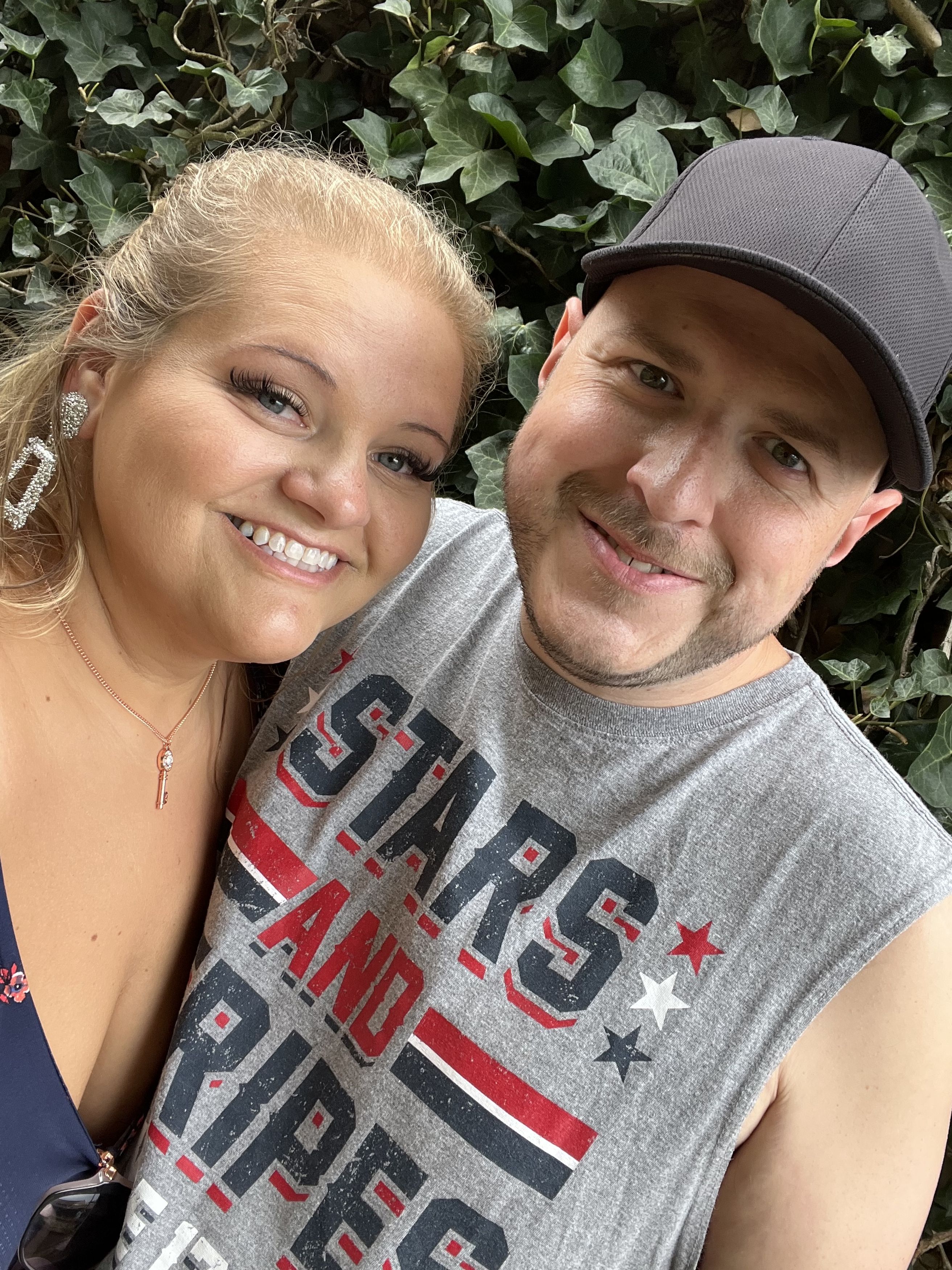 After waiting hours for her prescription, she was finally able to rush back to her wedding venue – more than eight hours after leaving for the hospital that morning.

The mum then had less than two hours to get herself and her four children ready for the ceremony and says they made it in the nick of time but her day was ruined by her painful eyes.

Alexis said: "I wasted my whole morning between the hospital and pharmacy, I did make it to my wedding on time but it was just not how it was supposed to be.

"I made it to the venue at 3:30pm and no one was dressed and my hair and makeup wasn't done.

"I got all my children ready but I didn't even have enough time to do my hair and my daughter's hair exactly how I wanted it, it was just very disorganised.

"I didn't even want to do the wedding anymore and it's not that I didn't want to marry him I just wanted to be able to enjoy it but I was in so much pain that nothing was enjoyable.

"I wanted to delay the wedding a few days but I couldn't because the venue was already taken for all of the other days and I wouldn't get my money back so I just felt really forced to proceed with the wedding.

"I wanted to have this awesome family moment so I just put my brave face on and got through it, but it wasn't at all how it was supposed to go.

"It really put a huge damper on my vacation and wedding day and I just regretted getting the extensions so much."

Alexis says doctors have confirmed that her left eye is healing well but the pressure in her right eye remains high due to the deeper cut and resulting haemorrhages.

If her eye does not start to heal in the next couple of weeks, she claims doctors have warned that she may develop glaucoma – a condition where the optic nerve becomes damaged due to pressure from swelling that can lead to loss of vision.

As she anxiously waits to find out if she will be permanently blinded by her ordeal, the newlywed now hopes to warn other women about the potential risks of eyelash extensions.

Alexis said: "I'm just hoping that in six weeks I get a clear bill of health for my eye.

"No lash extensions are completely safe because even if it only happens one in one thousand, you could be that one so it's just luck of the draw. It could happen to anyone.

"My personal suggestion would be if you want lashes for a special occasion just go with the glue-on lashes.

"I would never get eyelash extensions again, beauty is never worth your health."