SEOUL — In 2017 Kim Yura shot a video during a vacation she took to the Australian city of Cairns and later posted it on a YouTube channel.

Like many seemingly random (and not so random) online videos, it became a mild sensation — there are 1.3 million views — and has made something of a celebrity of its co-star, Park Mak-rye, 74, who is Ms. Kim’s grandmother. Their channel, Korean Grandma, currently has 1.31 million subscribers.

And although Ms. Park may be one of the better-known examples, she is not alone as an older person claiming a share of the spotlight in South Korea, where a “greynaissance” is helping reshape the culture. Koreans aged 50 and older are becoming key consumers and makers in the country’s economy, including the fashion and beauty industries.

Partly, it’s a result of the fact that South Korea has a rapidly aging population and partly, it’s the success of some YouTube and TikTok creators, who are an important factor in shifting beauty ideals, and who are becoming popular in Korea and abroad at the same time.

Hyeyoung Hwang, the digital editor at Vogue Korea, credits social media as the driving force of the movement. And that while “lack of senior representation in the media” has been a problem in many countries, for decades, she said, the “visibility of Korean seniors working in these industries has a particularly positive influence as pressures to follow age norms are so strictly defined.”

Miyoung Jeon, an analyst at Consumer Trend Research Institute at Seoul National University, said that “Koreans like to see young faces, even if they’re being served at McDonalds, so the fact that even a few seniors have been able to find work as models or YouTubers is remarkable.”

Ms. Park, whose many subscribers tune in for her cosmetics reviews and kitchen secrets, is just one example. “Beauty, to me, is not about being wrinkle-free,” she wrote in email. “What’s made me youthful over the years is my ability to overcome my fears about aging and pushing myself to do new things.”

Ms. Kim started the channel because her grandmother began showing signs of dementia, and Ms. Kim wanted to document the fun they had together. She said she had the idea for her grandmother to focus on beauty because makeup tutorials were trending at the time, though the channel has other kinds of videos as well.

“I understood that most viewers weren’t going to follow my grandma’s tips since she used non-famous brands,” Ms. Kim said. “But I thought it was a way to tell a story about her.”

Ashley Kim, 30, a Korean-American who lives in Melbourne, Australia, discovered Chang Myung-sook — a.k.a. Milanonna — another YouTube creator, when searching for self-care content online at the beginning of Australia’s lockdown in March 2020. “I was like, oh, it’s a granny?” Ms. Kim said of Ms. Chang, 68. “It’s a Korean granny!” Milanonna’s videos, including one called “Korean Old Lady’s Self Care Night Routine,” include skin care regimens that are similar to those of other YouTubers and to life hacks that come with age.

“In Korea, there’s this idea that once you hit a certain age, you’re no longer a woman, so it’s appealing to see these grandmas not give in to that narrative,” said Esther Oh, 32, who lives in Virginia and watches videos of self-described “Korean grandmothers.”

Jiyeon Kim, 30, who lives in Sweden, subscribes to Ms. Park’s channel but does not necessarily see it as a source of practical beauty tips. “I like seeing how passionate she is, but I wouldn’t wear my makeup like hers because it’s way too bold,” she said.

More recently, some older Koreans are joining TikTok. One account, @thenewgrey_, highlights the Ahjusshis, a crew of fashionable men in their 50s and 60s. Jee Sung-eun, 55, a founding member of the Ahjusshis, said he hopes the crew’s success serves as a reminder that you are never too old to try anew. “They used to say, ‘Life is a marathon,’ but I think it’s more like a triathlon,” Mr. Jee said. 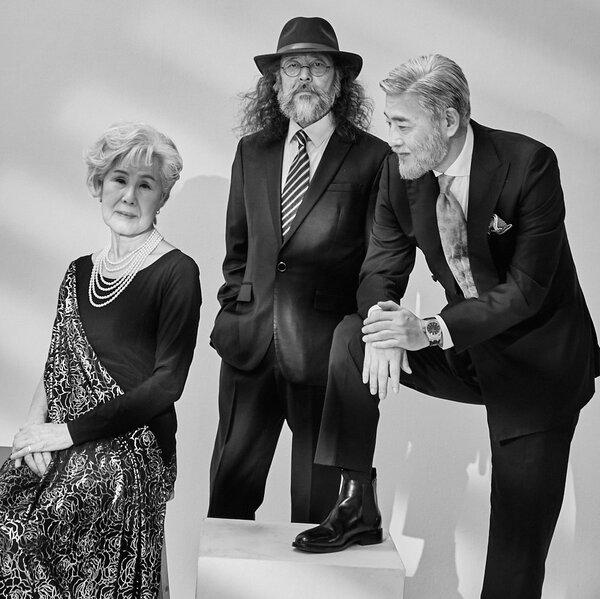 Although a handful of older social media stars have garnered millions of views online, finding an audience in the commercial fashion industry has been tougher. The Show Project, a modeling school and agency in Seoul, was founded in 2015 on the idea that it would connect older people with second careers. The agency now represents Kim Chil-doo, 66, and Choi Soon-hwa, 77, two of the best-known older models in the industry, and train over a hundred aspiring models.

Im Sung-min, a manager at the Show Project, said the industry has made some changes since 2016 when he first took Mr. Kim to an audition. “The casting director asked why I brought him a grandpa. He said, ‘I thought I told you to bring me some real models,’” Mr. Im recalled. Two years later, the agency got its first real break when the fashion label Kimmy. J hired Mr. Kim and Ms. Choi for a runway show at Seoul Fashion Week.

Still companies rarely use older adults as models, even though labels like Millet, MLB and Spao have. “A lot of seniors come to us looking for the kind of success that Mr. Kim has achieved, but the truth is that everything, from maintaining your body to landing gigs, is really hard,” Mr. Im said.

Choe Yun, the director of model development at the Show Project said that of the some 50 brands at Seoul Fashion Week, “only one or two of them will maybe use a senior model.”

But that doesn’t stop Ms. Park and other older people from exploring roles traditionally dominated by more the more youthful. “Nothing makes me happier than the idea that I could have inspired a new dream for people like me,” she said.