Mark Wahlberg grabbing his white boxer briefs and a 15-year-old Brooke Shields talking about what she wears beneath her jeans are creative ways Calvin Klein commercials shocked the public. This is kids’ stuff for the star of their latest campaign. 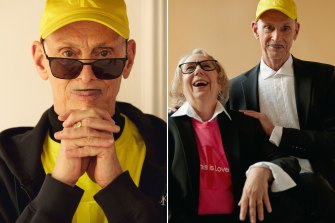 “The Calvin Klein ads were always artistic things that you looked forward to seeing what they would do next to make people nervous and buy great clothes,” Waters says. “It was exciting to be asked to work with them. You can never have too many careers.”

Waters is part of the fashion brand’s Love Is Love campaign, released for Pride month in the US which finishes this week. The advertisements celebrate chosen families in the LGBTQ community and also feature actors Sasha Lane and Sergio Lane, musician Snail Mail, and Jurassic World Dominion actor Justice Smith and his boyfriend Nic Ashe. Waters appears alongside his friend of 56 years and frequent collaborator, actor Mink Stole (Nancy Stoll).

The original casting continues Waters’ radical transformation from indie outlaw into mainstream media mainstay. It started with the 1988 movie Hairspray, which was transformed into a family-friendly musical and continues with his spoken word performances, books and guest appearances on television, most recently in The Marvelous Mrs. Maisel. 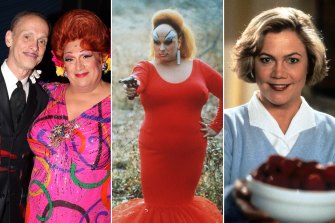 “Overexposed, that would be the name of a great Calvin Klein campaign. I think it’s great that Calvin Klein is being so supportive with Pride,” he says. “It brings attention to it. The more attention the better.”

“There are people who complain about it being mainstream, and sometimes it was more fun if you were an outlaw. But that was if you had money or class and didn’t get hassled every day. I think this campaign spreads the word to all communities and that’s incredibly important.”

“I did like it when we scared straight people, and I know that you can do that with fashion too if you do it properly. Look at the Marky Mark Calvin Klein ads. It caused a couple of gulps in straight guys when they looked at it and wanted to look like that.”

The transformation from Pope of Filth to self-described “filth elder” will be complete when Waters receives his star on the Hollywood Walk of Fame next year alongside Uma Thurman, Mindy Kaling, Paul Walker, Vince Vaughn, Juanita Moore, Lenny Kravitz and Ludacris.

“Sometimes people only recognise me because I was in a Chucky movie or the Alvin and the Chipmunks movie. You need to diversify your audience.”

Along with the guest roles, Waters sees himself as a writer, having released his first novel Liarmouth.: A Feel-Bad Romance. The most recent feature film he directed, A Dirty Shame starring Selma Blair, was back in 2004.

“I wrote all my movies. I’ve written all my books and my spoken word shows. I write everything I do. The basis of what I do is being a writer.”

In one spoken word performance Waters expressed his respect for literature by suggesting that you shouldn’t sleep with a person who does not have books in their home.

“I also say it’s even worse if you go in the bathroom and they have books there. That’s when you really should run for your life. It’s worse than having no books. If they have a basket of books with jokes next to the toilet, you shouldn’t sleep with them. You must erase them from your life.”

Chaotic humour is the electric thread through Waters’ films and writing, returning as he contemplates joining Stole as the second-oldest models alive, deferring to the seniority of 91-year-old veteran Carmen Dell’Orefice. Waters’ ease in front of the camera is something that he brings to each string of his bulging bow.

“I wouldn’t say I was always at ease at gym class in high school and I wasn’t always at ease when I would get arrested for making movies but I feel safe in almost any world,” he says. “I can kind of negotiate my way through it.”