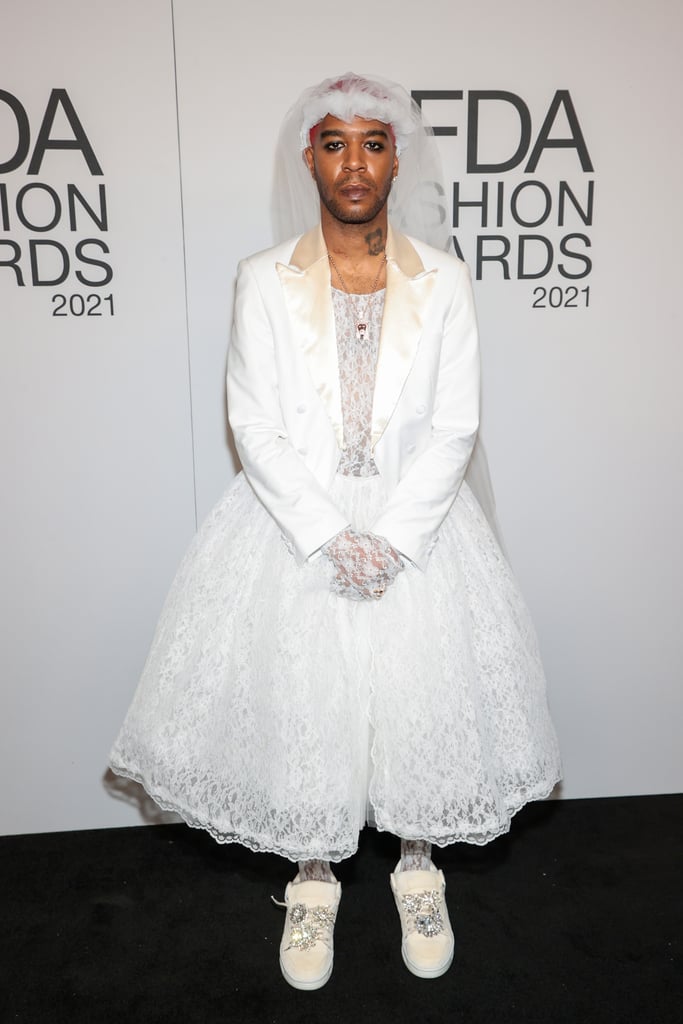 We’re saying “I do” to Kid Cudi. On Wednesday night, the rapper and boundary-breaking singer attended the 2021 CFDA Fashion Awards wearing an all-lace bridal look courtesy of designer Eli Russell Linnetz, and it all started with a text. The designer, who was honored by CFDA as a nominee for American emerging designer of the year, told People that he texted Cudi randomly with a photo of a wedding dress asking, “Will you be my bride?” The rapper had zero hesitations, saying, “I trust this man so I was down to take it wherever his mind went.”

The stunning bridal look from Eli’s ERL label featured a full-body lace catsuit, a matching tulle-filled lace skirt, a white blazer, and a classic veil. Our eyes were immediately drawn to his sneakers, an edgy bride’s dream kicks, which were adorned with three brooch-size gems across the laces of each shoe. Cudi took the red carpet hand-in-hand with the Venice Beach-based designer for fashion’s biggest night out.

In his music, fashion, and conversations about mental health, Cudi shines as his truest self, and it’s what his fans love him for. His recently released Prime documentary, A Man Named Scott, took viewers on an intimate journey into the struggles he’s experienced throughout his career and explored how his music destigmatized topics that were rarely touched upon in hip-hop. Earlier this year, Cudi performed on Saturday Night Live wearing a floral Off-White dress similar to the one Kurt Cobain wore on a 1993 cover of The Face magazine.

While some celebrated Cudi’s SNL style choices for degendering fashion, others called out the double standard that exists when a straight, cisgender man embraces femininity and receives praise, while members of the LGBTQIA+ community may be discriminated against for wearing that same dress. Check out photos of Cudi’s bridal outfit at the CFDA Awards and feel inspired to add a little edgy comfort to your nuptials.